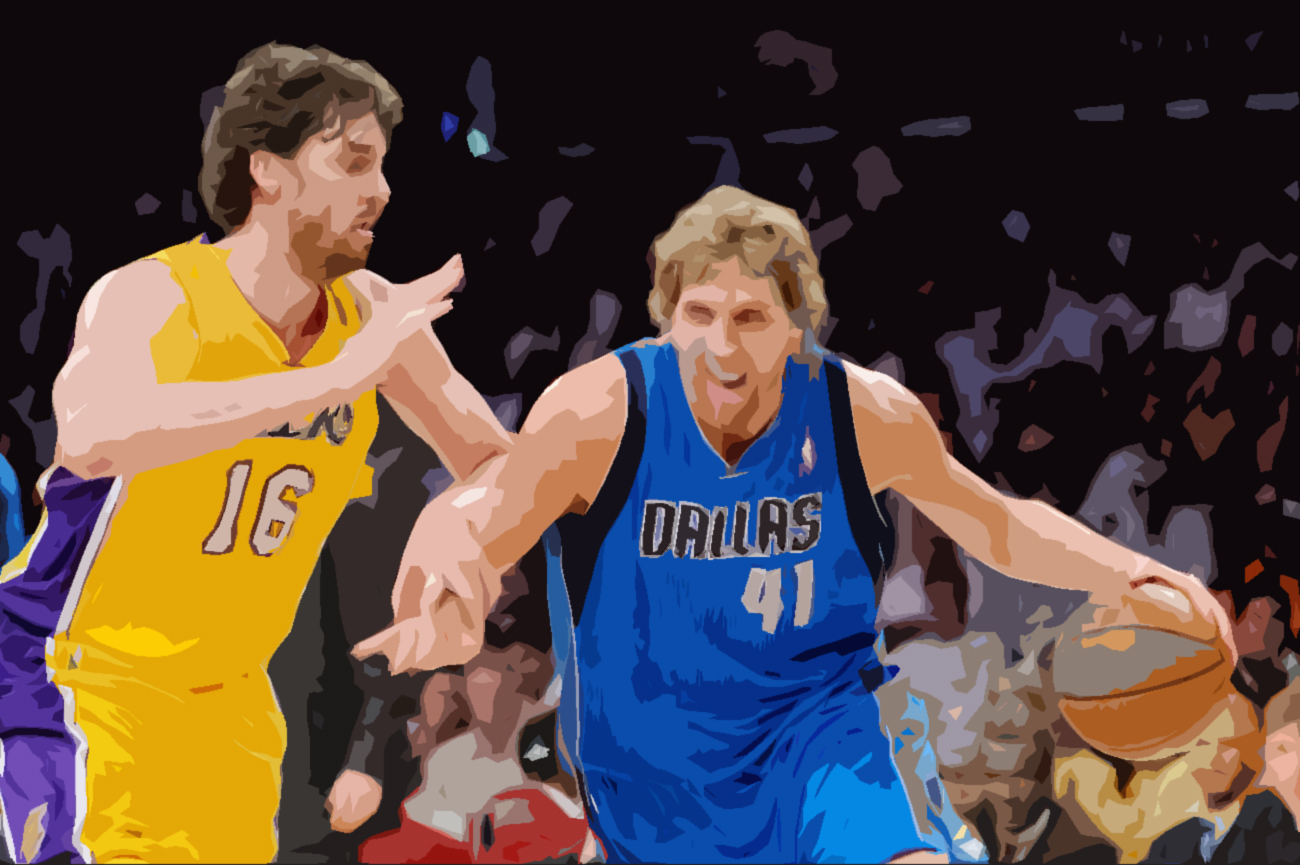 With the top 20,  top 10, top PG, top SG and top SF for 2011 fantasy basketball in the can, it’s time to gander at the top 20 power forwards for 2011. Right off, you’re bound to notice that half the guys on this list can be considered centers. Well, yeah, ’cause a lot of these guys will play center. With the rosters of all 30 teams still shifting, It shouldn’t matter in most leagues, but for the rare league that doesn’t toss around position eligibility like mailer coupons to Bed, Bath & Beyond, this is the position these players played the majority of their minutes last season. And before you yell at me Wednesday because half the centers on that list played power forward, first take a step back and ask yourself why you’ve been yelling so much lately. If Marilyn Manson still makes music, I’ll go ahead and blame him for your anger. Anyway, as has been the pattern so far, these rankings are a hybrid of both 9-cat roto and H2H leagues.

Here are the top 20 power forwards for 2011 fantasy basketball:

6. LaMarcus Aldridge – He basically heaped his team on his back and carried it like Chewbacca did with C3PO’s bag of body bits; and considering we’re talking about the Blazers, here, there were plenty of faulty body parts to go around. They’ll be fewer distractions and without Roy, this is LMA’s team. You can count on him. Just like LMA said, he’s steady and he knows it.
Season Projections: .495/.775/0 3pt/21 pts/8.5 rbd/2 ast/1 stl/1 blk/2 tov

7. David Lee – Lee was injured throughout the bulk of last season. For a while he wasn’t playing. Then he was playing hurt. The he was playing hurt and frustrated. These are things I can hold against 2010 Lee, but not 2011 Lee. Don’t forget how monster he was before last season. (If monster is an adjective, DavidLee is an adverb. Deal!) Also, don’t forget that Lee had a really off season last year and still finished with a 17/10/3 line with solid percentages for a big.
Season Projections: .529/.784/0 3pt/19 pts/11.5 rbd/3 ast/1 stl/0.5 blk/2 tov

8. Josh Smith – I love Smoove’s multi-faceted game. On any given night, he can give owners a little of everything. This is why he’s attractive to fantasy owners. Aside from free throw shooting, he doesn’t do many things sub-par. The problem – especially for owners in H2H leagues, is that he disappears for a game or two, turns it on, then disappears again without much rhyme or reason. I can put up with that from my fourth or fifth round pick, but nothing sooner. No one ever lost a fantasy league because they chose sturdy, reliable picks in the first three rounds of his draft.
Season Projections: .488/.699/0.5 3pt/16.5 pts/8 rbd/3.5 ast/1.5 stl/1.5 blk/2.5 tov

9. Zach Randolph – Not a sexy pick. I’m not talking about his fantasy output, I’m talking about Z-Bo, himself. Not a sexy pick, ladies. You want 20/10, with percentages appropriate for a power forward? Randolph. Easy. He’s your backburner date when no one else is available. Smoove is taken, Aldridge is gone, Lee was snatched up and you’re dangerously close to missing out on a a reliable 20/10 source at the four. Call Randolph. He’s not doing anything, but sitting at home watching “Gilmore Girls” reruns, while sucking down a tube of sugar cookie dough.
Season Projections: .485/.770/0 3pt/20 pts/11.5 rbd/2 ast/1 stl/0.5 blk/2 tov

10. Chris Bosh – Don’t get it twisted, sister, Bosh still has it in him to be one of the five best power forwards in this league, there just need to be a few tweaks from last year; just as the Heat have it in them to win a championship. One year, does not a career make. The heat (small “H”) will die down around Miami a little (only a little), the jokes about Bosh being an, ahem, “bitsh” won’t seem as funny and can’t you just see March rolling around and Bosh is quietly averaging somewhere around 20/10 and everyone suddently kicks themselves for forgetting how good Bosh is capable of being. Don’t be one of those guys kicking themselves because they assumed David West was going to blow up huge for the Pacers or something and skipped right over Bosh.
Season Projections: .505/.812/0 3pt/19.5 pts/8 rbd/2 ast/1 stl/0.5 blk/2 tov

11. Paul Millsap – In five seasons, PM hasn’t missed more than five games. Millsap just keeps doin’ it and doin’ it and doin’ it right. IF there’s something negative to be said about last season, it’s that he improved across the board in just about every stat category, which makes my job much, much harder. IF there’s something positive to be said, it’s just about everything else about dude’s developing game. Sky’s the limit for Millsap. The fact that the Jazz are healthy and there are several other able-bodied fours on the Jazz bench make me rank him below Bosh and Randolph. (Dang, I should have put that last point up in the negative point about last season. Missed opportunity! Also, since I just came up with something negative and positive to say, I don’t know why we’re using the word “if.”)
Season Projections: .522/.733/0 3pt/18 pts/8 rbd/2.5 ast/1 stl/1 blk/2 tov

13. Carlos Boozer – I can see Charlie Lush rising or falling a couple spots depending on his attitude. I can also see him rising or falling many spots depending on his statistical output, but I figured that was too obvious to state here. Anyway, if he’s engaged in what the team is doing, he’ll be an integral part of the team’s offense. If he boneheads his way through games, the Bulls will work around him the same way they did in last year’s playoffs; a playoff, by the way, in which he averaged 12.5/9.5/2.
Season Projections: .515/.718/0 3pt/18 pts/9 rbd/2.5 ast/1 stl/0 blk/2.5 tov

14. Serge Ibaka – Back in March, I had this to say about Ibaka: “A full year of Ibaka at PF next season is going to be huge. After just seven games this month, Ibaka has more blocks (25) than in either of the last two. Also, his 9.7/9.4, with 3.1 blocks in 29.7 mpg since Jeff Green was traded to Boston are all above his season averages. I wouldn’t expect much else defensively from Ibaka next year, as he’ll lose a few boards and blocks to Kendrick Perkins, but having two sturdy bigs roaming around the rim instead of the weak Nenad Krstic or the roaming Nick Collison, will improve Ibaka’s scoring a bit and may prove him to be a Camby-like fantasy necessity next year.” So there it is and there it goes.
Season Projections: .530/.740/0 3pt/12 pts/9 rbd/0.5 ast/0.5 stl/3.5 blk/1 tov

15. Lamar Odom – If my old lady was drafting a fantasy basketball team, Odom would be on it. If for no other reason, than because she empathizes with what Khloe has to deal with, having to move halfway across the country from California to Texas. Which is appropriate, as I can empathize with Odom, having to listen to unsolicited opinions from someone who makes way more money than I do. Assuming the Mavs move Dirk to center and start Lamardashian, his fantasy value rises a bit, as proven by Odom’s original ranking at no. 17 prior to the trade. My worry is that, on a team that lives by the jumpshot, Odom will become sloppier with the Mavs than he was with the Lakers.
Season Projections: .500/.660/1 3pt/15.5 pts/9 rbd/3.5 ast/1 stl/1 blk/2.5 tov

16. Luis Scola – This is a conservative ranking of Scola, who was close to sharing the frontcourt with the second-ranked guy on this list. Still, Scola has quite quietly improved his game these last few seasons. He’s a rock. He’s finally found himself after what I imagine was a series of summers backpack through Europe, or dropping acid at Burning Man or attending some Hot Yoga classes or whatever people do to find themselves. If you can land him as your second PF, you’re in great shape.
Season Projections: .522/.730/0 3pt/18 pts/8 rbd/2.5 ast/1 stl/0.5 blk/2 tov

18. Kevin Garnett – It’s KG. Ain’t nothing new to say about him other than he hasn’t missed any fewer than 10 games as a Celtic. Humor me as I talk real hoops for a second. I’m actually expecting big things out of the big three (and Rondo) this season. The clock is ticking, Rondo has been involved in several trade rumors, the shortened season won’t leave this old team short of breath and before you give me all the reasons why it doesn’t make sense for them to win the championship, allow me to remind you who won last year’s title.
Season Projections: .500/.850/0 3pt/14.5 pts/7.5 rbd/3 ast/1 stl/1 blk/1.5 tov

20. Elton Brand – The old man hung in there for 81 games, provided fourth round value at a 10th round price and proved that at 31, he’s not quite done. I feared he was done. Now I just fear he missed out on the sweet spot of his career with his knee issues. Still, we may be seeing a rejuvenated Brand for a season or three. La Dolce Correre! A few more romps through the fountain and Brand may stall looking like a late-era Anita Ekberg for a few more seasons yet.
Season Projections: .565/.737/0 3pt/16 pts/9 rbd/1.5 ast/0.5 stl/1.5 blk/2 tov