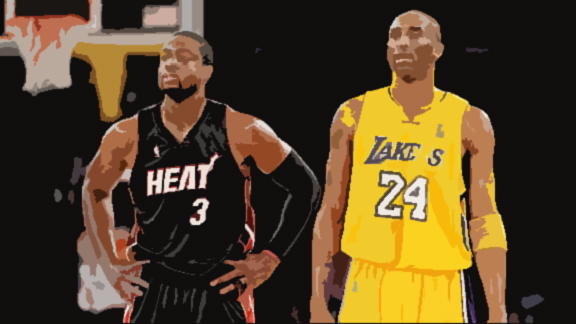 With the top 20,  top 10 and top PG for 2011 fantasy basketball in the can, it’s time to turn to an altogether shallower, moodier band of horses: the top 20 point guards for 2011 fantasy basketball. Unlike their shorter, faster PG counterparts, if yo don’t grab the few elite two-guards, you can go a large chunk of your draft skipping the position and making up for it later. Either that or just draft a SF with the ability to shoot the three. I’m pretty sure Yahoo gave all those players SG eligibility. And now you see why these guys are so moody. As has been the pattern so far, these rankings are for 9-cat roto/H2H hybrid leagues.

Here are the top 20 shooting guards for 2011 fantasy basketball:

4. Kevin Martin – Speed Racer played his healthiest season yet last year, missing only two games. Anyone worth his salt would have told you Martin’s health was the single largest determining factor of his fantasy value. Although, anyone aware of how much salt he’s worth is probably not actually worth all that much. I mean, you just got traded for salt, bro. At least get some magic beans tossed in there. Anywoot, taking advantage of his health, Martin led the league in free throws made, while maintaining his extraordinary free throw percentage. He won’t give you much in the way of rebounds or assists and his FG% has never been stellar, but he’s among the five best resources for threes and FT% in the league, while scoring at a solid clip and being at perhaps the most shallow position in fantasy basketball. Your job for the draft is to decide whether he plays another full season or missed half of it again.
Season Projections: .430/.910/2 3pt/22.5 pts/3.5 rbd/2.5 ast/1 stl/0 blk/2 tov

5. Manu Ginobili – Admit it, you’d be as excited as me if Manu grew out his hair again now that he’s developed that bald spot. He’s look like Hulk Hogan before he went bandana full-time; or maybe Vigo the Carpathian. I just wanna see something new. I’m restless. And I’m pretty sure a new haircut is the only new trick Manu can coax out of a bag chock-full of pretty solid old tricks. I cautiously ranked Ginobili lower than he ultimately should have been last season because he was 33 and had never missed fewer five games in any season. Until he played in 80 last year. Fine. Be that way. I’ll be a little less cautious now that he’ll be 34. Let’s see what happens. I’ll draft him across all leagues, he’ll miss three months and I’ll be right. My teams will all sink into the pooper, but I’ll be right. Huzzah! For the rest of you, don’t assume he’ll play 80 games again, don’t assume he’ll average a three-year high 30 mpg or 17.4 ppg again, and don’t ass Hume. Hume hates being assed.
Season Projections: .455/.859/1.5 3pt/18 pts/5 rbd/5 ast/1.5 stl/0.5 blk/2.5 tov

6. Eric Gordon – I’m not entirely sure I’m sold on Eric Gordon’s awesomeness yet. I feel like a got a little taste of it last year, like when ice cream parlors give you a paper cup, a wooden stick and an eighth of a scoop of ice cream so you can sample before you buy. But just as you put the ice cream in your mouth, your eye catches the brand new bright pink Blake Griffin-flavored ice cream and you fixate on that for a second and realize you swallowed the sample without paying attention to how it tasted. So here he is, ranked no.6. A full serving. It better not have pecans in it!
Season Projections: .470/.810/1.5 3pt/20 pts/3 rbd/4 ast/1 stl/0 blk/2.5 tov

7. Arron Afflalo – I understand some folks preferring Spellcheck three spots lower than I have him here. He’s mostly unproven, despite given plenty of time and touches last year – the first year in the “When-Will-Afflalo-Breakout” era. So, no, I wouldn’t eat your lunch for choosing Afflalo later. I would, however, eat your lunch if I was hungry and you got up to go to the bathroom. Don’t look at me like that, you shouldn’t have left the sandwich sitting there knowing how much I love it! Truthfully though, Afflalo showed very minor improvement last year and figures to fit into Denver’s plans far more than last year, when J.R. Smith, Wilson Chandler and Carmelo Anthony muddied up the role Afflalo was largely expected to fill. It’s a foregone conclusion that if he stays in Denver, the opportunity for big minutes will be there. I’m betting that Afflalo making a meal of it. NOTE: This blurb was written at lunchtime.
Season Projections: .460/.830/1.5 3pt/15.5 pts/4.5 rbd/3 ast/1 stl/0.5 blk/1.5 tov

8. Joe Johnson – There was a time not long ago that Double-J was running all over the Eastern Conference, but that time wasn’t last year, or the year before and it won’t be this year. Johnson’s salad days are past him and now he’s just burping up ranch dressing. The SG field is wicked shallow, so he’s still a worthwhile guard to own, but his scoring has dipped in each of the last four seasons, along with his three-point shooting, free throw percentage and assists. Johnson just doesn’t really want to run over anyone anymore. Ninety percent of the time, he’s happy to blend in. I mean, his name is Joe Johnson for Godssake. Put him with Ed Davis and George Hill and you either have the characters from “Glengarry Glen Ross” or the most forgettable set of basketball names in the league. So, congrats Joe, you blended right into the middle of this list.
Season Projections: .450/.810/1 3pt/17 pts/4 rbd/4 ast/1 stl/0 blk/2 tov

10. DeMar DeRozan – There’s only one guy on this list projected to sink fewer than 60 threes this season and you’re looking at him. Or, if you’re the literal type, you’re looking at the words made up to represent an opinion addressing one of the Toronto Raptors player personnel. DemDer made huge scoring strides last season and was in the argument for most improved player, so it isn’t outside the realm of possibility that he could develop an outside shot. But I haven’t seen it. Show it to me and we’ll talk about a top 10 spot for him.
Season Projections: .475/.819/0 3pt/20 pts/3.5 rbd/2.5 ast/1 stl/0.5 blk/2.5 tov

12. Stephen Jackson – Little known fact: Stack Jacks had a “play no fewer than 36 minutes per game” clause written into his contract before he left Golden State. This is how he’s managed to average 20 points a game while shooting 41 percent from the floor. Dang. That’s a mighty smart clause he’s got. Let’s hope Milwaukee’s got a “maybe-don’t-chuck-up-a-brick-when-Bogut-is-open-under-the-rim” clause for Captain Jack.
Season Projections: .430/.805/1 3ptm/17.5 pts/4 rbd/3 ast/1 stl/0.5 blk/2.5 tov

13. Ray Allen – Just a reminder: Ray Allen is the oldest guy on this list (he’s among the oldest in the league). He also had the lowest 3PA average in 13 seasons. That continues a downward 3PA trend that started the year he arrived in Boston. Still, he set career highs in both FG% and 3P% to make up for it. Allen is shooting less than ever before, but his efficiency has never been better. Literally, his last three seasons have brought his three highest FG% and three of the five best eFG% (adjusted field-goal percentage to account for the fact that threes are worth more than twos) of his career.  So you tell me: how much is Ray Allen worth if Ray Allen attempts fewer threes, but makes them at a more efficient rate?
Season Projections: .485/.900/2 3pt/15 pts/3.5 rbd/2.5 ast/1 stl/0 blk/1.5 tov

14. Wesley Matthews – I’m a little more cautious with Matthews than other ‘perts (I handle him gently, they all toss him around like squirrels with limp mice in their mouths). Matthews is young and, given the opportunity last season, illustrated a streaky ability to shoot the ball from all distances (well, many distances, anyway). But even if that streakiness goes away and he shoots .500 from the floor, he still doesn’t do much else for you fantasy-wise. It still appears as if he’ll lose a little time to Brandon Roy, Batum is close to a breakout and Gerald Wallace is going to see some touches, which means Matthews will see a few fewer. (Stutterer!)
Season Projections: .470/.890/2 3pt/15.5 pts/3 rbd/2 ast/1 stl/0 blk/1.5 tov

15. Jason Terry – Ugh. I hate drafting Jason Terry. Wanna know how to ensure I don’t even consider a trade offer from you? Throw in Jason Terry. I once rejected a Terry offer so hard that it spun the Internet backwards like Superman reversing the gravitational rotation of the Earth. It happened so quickly and forcefully, the guy who did it blacked out for three weeks and had to redo an entire semester of college. It always feels like I’m giving up on my fantasy chances when I settle for him as my second (or God forbid, first!) SG. And he’s the 16th best option in fantasy basketball. Seriously, just stick Tyreke Evans in this spot and be done with it. That being said, he’s a fine option for threes and FT%!
Season Projections: .455/.870/2 3pt/15.5 pts/2 rbd/3.5 ast/1 stl/0 blk/1.5 tov

17. Jason Richardson – In his 25 games with the Suns last season, he was right on target of being a value pick in the fourth round, averaging a .470 FG%, 19.5 points and 2.5 threes per game. Then he was traded to the suckhole Magic and started suckholing™ (.430 FG%, 13 ppg, 2.5 3pm – I like hyperbole!). I don’t love Richardson’s bounce back odds. …He averaged career-lows in rebounds, assists and blocks and hasn’t averaged 16+ points in two seasons. To add insult to injury (like not eating the whole burger after you slaughtered, sliced, and cooked the cow), Richardson tends to produce in bunches. As anyone who owned him will tell you, it’s impossible to know when those bunches would start or end.
Season Projections: .445/.750/2 3pt/13.5 pts/3 rbd/3.5 ast/1 stl/0 blk/1.5 tov

18. George Hill – During last year’s preseason, I picked San Antonio Hill (which, I believe is, like, three blocks from the Alamo) to win The Most Improved Player Award by year’s end. By December, I dropped him and his 26 mpg. Then, this preseason, I again assumed San Antonio Hill was set for a bigger role. Poppovich was big on the kid and there aren’t many basketball people whose opinion I trust more than Popps. Then San Antonio Hill became Indiana Hill, which I believe is the hash house one goes to when they’re Indiana Jonesin’. There’s no telling what is going to happen in Indy right now. Hill may find tons of minutes or reach another roadblock. He’s efficient enough, multi-tooled enough and qualifies for a shallow enough position that I’d give him the benefit of the doubt toward the end of your draft. Yes, guys in the top 20 of this position shouldn’t be taken until at least round nine.
Season Projections: .455/.870/1 3pt/13 pts/3 rbd/3 ast/1 stl/0 blk/1.5 tov

19. Jordan Crawford – Andray Blatche ain’t the only one without any idea what’s going on with the Wizards. It’s John Wall’s team. Check. After that? McGee? ‘Shard? Blatche? It all sounds like what one finds in their underoos after a night of spicy Mexican cuisine. Then there’s the likely platoon awaiting the Wizards’ two-spot. A year ago, this guy wasn’t on any fantasy radar. Then he took advantage of a series of injuries and exploded with the basketball; albeit inefficiently, but still … I fear the two-gaurd situation will be like the Jose Calderon-Jarrett Jack platoon (or Jose Calderon-Jerryd Bayless platoon) from last year. Young will start and Crawford will come off the bench, maybe it switches up every five games or something until the fates knock something off its axis. Maybe that means Young’s ‘fro catches fire in a freak skillet accident, maybe Michael Jordan chokes Crawford to death for his insubordination the next time D.C. is in Charlotte. Or maybe one of them gets traded because this aggression will not stand, man. Either way, both should be owned. Only one will probably be kept.
Season Projections: .440/.800/1 3pt/15 pts/3 rbd/3 ast/1 stl/0 blk/2 tov