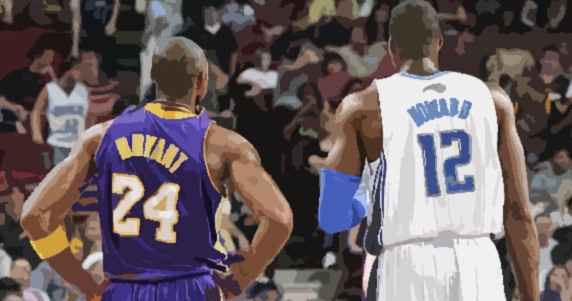 .
Remember on Wednesday when we went over the top 10 for 2011 fantasy basketball? We read, then laughed, then cried a little, then snorted after a failed attempt at holding in additional crying, which led to an unfortunate snot bubble, which led to my snickering at your snot bubble. And then we returned to laughter. Or, at least, I returned to it; you had quite the snot bubble to take care of. Today, we’re hauling out our top 20 for 2011 fantasy basketball. Next week, we’ll tackle the top 20 at each position. Then the top 100. Then the top 200. Then some tiered rankings, maybe a few watercolors, a Haiku here ‘n’ there. Then the world.

All rankings are an amalgam of 9-category roto and h2h leagues (note the season projections at the end of each blurb. They’re compiled in increments of five-tenths. Why? Would I be here if I could predict in increments of one-tenth? C’mon. That’s just crazy talk).

11. Carmelo Anthony – Last year, I wondered out loud (via the Internets) if it was weirder that Wade or ‘Melo shot fewer than one three-pointer per game. I decided Wade seemed more like a guy who should be draining threes. I’m pretty sure LaLa heard me on her junket (pronounced yunk-it) from Denver to New York last spring, because as soon as her husband hit the Big Apple, dude started making buckets on buckets on buckets. Maybe it’s New York’s pace (hip, cool, bustling, 95.6 possessions per game), maybe it was having defenses worry more about Amar’e than they ever did about Nene. Or maybe the cowboys finally let the bull outta the ‘pen. It’s hard to tell. At any rate, Carmelo’s emerging as the superstar in this league with the quickest, bestest jumper. I’d ride the wave ’til you feel the coral ‘neath your feet.
Season Projections: .455/.835/1.5 3ptm/25.5 pts/7 rbd/3 ast/1 stl/0.5 blk/2.5 tov

12. Kobe Bryant – Kobe be Kobe. Also, Kobe B. Bryant, but that is neither here nor there. What is simultaneously here and there are the arguments against the Lakers captain. He’s aging. He’s got a lot of miles. He’s not the best player on this team. Yada3. He’ll slow a bit this season, probably, but not as much as his body would suggest it should. Like him or lump him, Bryant is one of the more intelligent players in the game and I image we’ll get a small handful of seasons – much like second three-peat era Jordan and 2007-2009 Tim Duncan – in which the mind does as much heavy lifting as the body, leaving our eye barely noticing the difference.
Season Projections: .450/.825/1 3ptm/25 pts/4.5 rbd/4.5 ast/1.5 stl/0 blk/3.5 tov

13. Dwight Howard – My name is Adam and I don’t believe in punting categories – ever. I’ve gone ’round and ’round with H2Hers on the merits of being able to ignore player weaknesses. These were real cool arguments that happened in super fun parties, with attractive girls hanging on our every word. Believe me. Getting pummeled in a category is getting pummeled in a category regardless of whether you’re only matched up against one opponent, only fighting for one week’s worth of points or playing in a roto league slowly accumulating each position’s point totals. Guys like Howard, Bogut, Rondo and Kidd make things interesting, like a Jackson Pollack painting. My apologies to those who think Howard’s 2 ppg bump last season earned him a top 10 spot. In the first round, I’m not looking for abstract art like Pollack, I’m looking for something straightforward and sturdy like the frame it came in.
Season Projections: .575/.593/0 3pt/20.5 pts/14 rbd/1.5 ast/1.5 stl/2.5 blk/3.5 tov

14. Blake Griffin – There’s a chance that fantasy owners are going to slightly overpay for Griffin this season by tossing him in the top 10. There’s also a chance they wouldn’t be overpaying at all if they did end up doing that; much like Stephen Curry last year.  Blake Superior made a huge leap (literally at times, but also figuratively) in the final 25 games of the season. He was shooting more efficiently (.695, up from .617), passing more (4.5 assists per game, up from 3.5) and even turning over the ball less (2.6 turnovers per game, down from 3.0). He’s still not great on defense and carries a free throw percentage only somewhat less damaging than Howard’s, but if he can improve on either of those parts of his game, you can look forward to Kobe Bryant not even being the second-best player in Los Angeles!
Season Projections: .495/.670/0 3ptm/23.5 pts/11.5 rbd/4 ast/1 stl/0.5 blk/2.5 tov

15. Russell Westbrook – Much has been made of Westbrook’s questionable shooting from the field, but almost nothing is ever mentioned about his stellar FT%. It’s among the most helpful in the league; up there with Durant, Kevin Martin and Nash. Consider this me mentioning it. He’s an elite scorer, stealer, assister and free throw shooter. <– Bestbrook! He turns the ball over too much and shoots more than his owners would like. <– Worstbrook! For what it’s worth, James Harden is likely to start and produce for the Thunder and will likely reign in or, ahem, “harden” Westbrook’s freewheeling a bit. That’s the good news. The bad news is that Westbrook has yet to miss a game in his career. I’d bet all the mints and lints in my pocket that he misses at least five this season.
Season Projections: .440/.829/0.5 3ptm/21 pts/4 rbd/9 ast/2 stl/0.5 blk/4 tov

16. Amar’e Stoudemire – Every season, I get the distinct impression that someone lied to Stoudemire about how long the season is. “Whatcha up to Amar’e?” “Nothing really. Just lifting those weights, getting ready for another 70 games.” “Uh, 70 games, Amar’e?” “Yup, plus playoffs.” Last year, Stoudemire averaged 26/9/3 before the All-Star Break and everyone was all a-twitter (and a-Twitter) whispering that he could be MVP. Then March rolled around and he looked kinda surprised that he had to guard the Bucks or Wizards or whatever (he pretended to guard those teams anyway) and ended with 25/8/2. Of the last three months of the season, his career April stats are lower across the board than February and March. So either he thinks the season is a lot shorter than it is, or a superstar scoring machine joined the team right after the All-Star Break last season and took a little of STAT’s stats. Either one.
Season Projections: .515/.795/0 3pt/24 pts/8 rbd/2 ast/1 stl/1 blk/3 tov

17. Al Horford – I find myself always wanting to call Horford “Dominican Al.” Am I allowed to call him that? I know “Big Al” is fine. “Weird Al” is cool. But “Dominican Al?” Am I profiling the guy? I don’t mean to. It sounds nicer than calling him “the Horford Whaler” and also clarifies that the Al I am referring to isn’t Thornton, Jefferson, Harrington or Allen Iverson, whose initials I often mistake for “Al.” I’m not profiling him, please believe me. And now: my 2011 fantasy basketball profile of Al Horford! His PER has increased every season (14.7, 17, 19.4 and 20.7) right along with his scoring (11.6, 12.4, 14.5 and 15.7). Between 2009 and last season, Horford turned the ball over less, assisted more, blocked more, improved his percentages and somehow still managed to have the glossiest lips and heaviest eyeliner in professional basketball. It’s weird. I’m not saying he wears makeup. I’m saying he looks like he’s wearing makeup. And he’s only 25, let the kid experiment with makeup if he wants. (Lawyers note: Mr. Horford does not want.)
Season Projections: .545/.777/0 3pt/16.5 pts/10 rbd/3.5 ast/1 stl/1 blk/2 tov

18. Rudy Gay – I know, I know. This seems a little high to me too. I originally ranked Gay somewhere around 25 and kept creeping him up. Rudy has had a bad rap ever since he ended his third-year campaign with lowered stats across the board. Not significantly lower, mind you. Just low enough to peeve the folks who expected way more from him. Ever since then, the pendulum continues swinging the other way and people have underestimated Rudy just a bit more than they should. It was his third year, he’d improved tremendously the season before, it was the first full season without Pau. The stars were aligning Gay’s way. (Gay’s Way is my favorite bar in San Francisco, bee-tee-dub. That’s a story for another time.) The story for right now is that Rudy bounced back from his down 2008 season in 2009 and a little more so last season. Maybe he snapped from undue pressure in 2008. Maybe he looked at his bench and saw Javaris Crittenton, Darko Milicic, and Darius Miles looking back at him and dude checked out for a season. Who knows? What is clear is that other than 2008, Gay has steadily improved in each of his other four seasons. I’m betting the team dynamics don’t allow for much more growth, but we’re not in for another 2008, either.
Season Projections: .460/.775/1 3pt/19.5 pts/6 rbd/3 ast/1.5 stl/1 blk/2 tov

19. Monta Ellis – Say hello to the top 20, Ellis. Here’s your wine spritzer and your party hat. Enjoy it, look around, but don’t bother taking off your jacket because you might not be staying long. Ellis had his two best statistical seasons last year and the year before. He also averaged 40.3 and 41.4 minutes a game respectively. He’s only 26, so it’s feasible he has a few more 40-minute-per-game seasons in him, but he can’t very well average more than 41 minutes a game, so you have to figure his stats aren’t improving much from their 2009 and 2010 levels. We’re at the pinnacle of Ellis’ loop-de-loop, which is really the fun part. The climb up is nervewracking and the plummet back to Earth always makes me pee a little, but the moment in between is a sweet mixture of the two. There’s no telling how long that pinnacle lasts. I’m guessing one more season and then the decent. Throw your hands up and grab some air before it’s too late.
Season Projections: .445/.770/1 3ptm/24 pts/3.5 rbd/5 ast/2 stl/0 blk/3.5 tov

20. Danny Granger – I’ve been a fan of Granger’s for most of his six-year career. I’ve owned him across most of my teams for at least the last three seasons. That said,  I can’t think of another player more frustrating to own. (Maybe Josh Smith.) It’s hard to project what kind of season Granger owners are in for. The Pacers will be big players in the brief NBA preseason and it seems impossible to think the team won’t improve on its offense one way or another. Like Iguodala and Gerald Wallace, Granger isn’t really the team leading offensive dynamo he’s tried to play these last few years. He’s an outstanding wing with a killer post-up game that would drive teams crazy if they had someone else to focus on besides him. If someone like David West lands in Indy, maybe Granger relaxes, stops chucking up so many sloppy threes, drives to the hoop more and earns another spot in the top 10. Or maybe Indy’s roster filled with potential stars (Collison, George, Hansbrough, Hibbert) develops and Granger fades into the role of sturdy role player. It’s your call. My call is to close out the top 20 with him.
Season Projections: .445/.850/2 3pt/22 pts/5.5 rbd/2.5 ast/1.5 stl/1 blk/2 tov