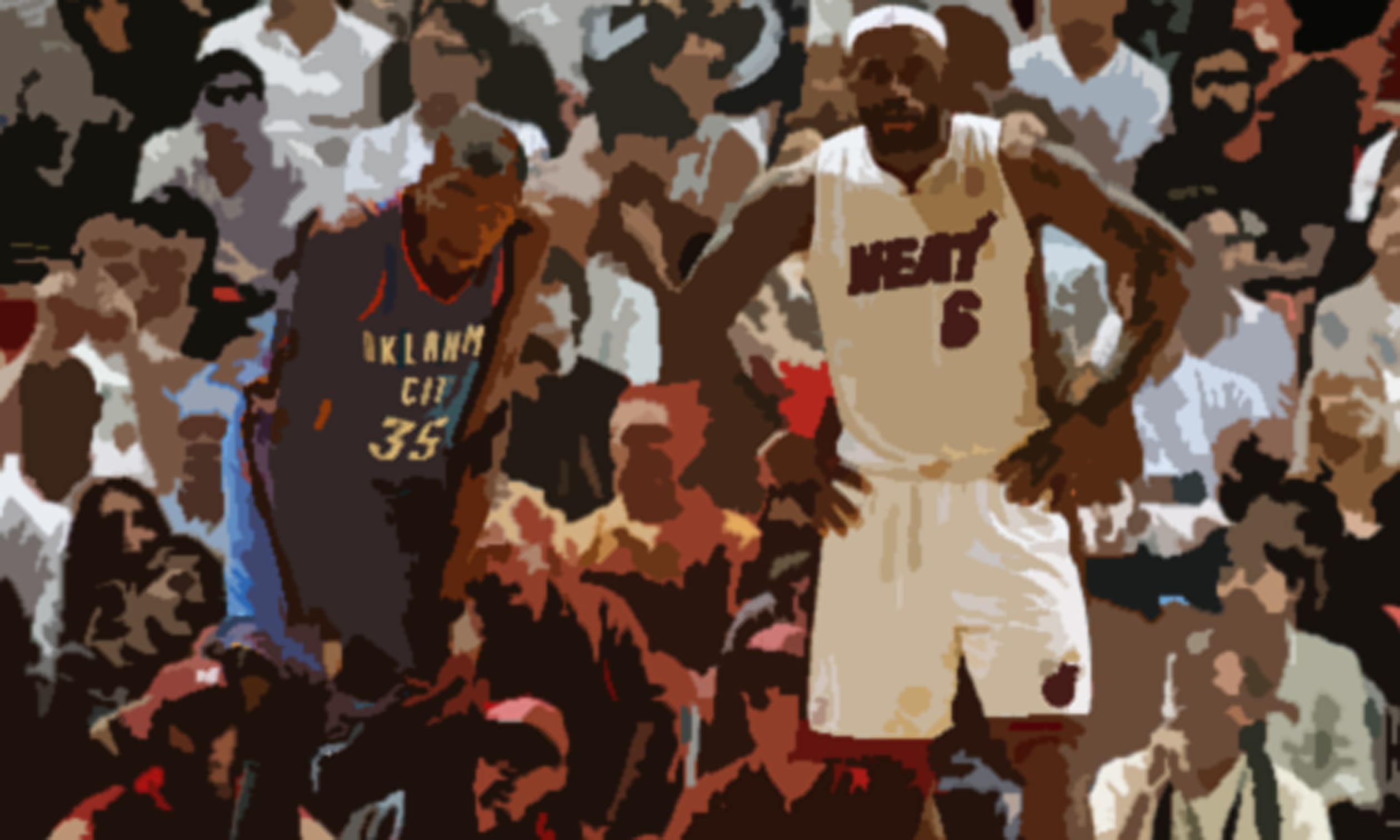 With the top 20,  top 10, top 20 PG and top 20 SG for 2011 fantasy basketball in the can, it’s time to gander at the 20 best fantasy swingmen (“fantasy swingmen” sounds naughty) for 2011. Not be spoil things, but the two best players in basketball play the three-spot. If you have them on your team, you’re off to a good start. If not, be cool. Chillax, recool, breezecalm and any other made-up portmanteau that essentially means “stop shrieking like a small dog.” There are other options. You’ll like them if you get to know them. Let’s go slow. And whatever you do, don’t look Michael Beasley directly in the eyes. As has been the pattern so far, these rankings are a hybrid of both 9-cat roto and H2H leagues.

Here are the top 20 small forwards for 2011 fantasy basketball:

6. Gerald Wallace – No one in the league has better nicknames than Gerald Wallace. For that reason alone, I’m a fan. I’m also a fan because he has a fairly long track record of freak leaking. Remember that season he led the league in steals? What about that season he suddenly averaged 10 boards every game? Awesome, right? Yeah. It WAS awesome. Thank you for silently agreeing with me over the Intertubes. Thing is, Multiplicity has missed at least 11 games in EVERY SEASON except one. I’m sorry for shouting just then, but I wanted a dramatic effect and I didn’t have time to set up black lights in your house. Call me bonkers, but I’m not counting a guy with Crash’s track record as a good bet – especially when he plays for the Frailblazers. You draft this guy, you’re getting a maximum 55 games out of him.
Season Projections: .470/.759/0.5 3pt/15.5 pts/7.5 rbd/2.5 ast/1.5 stl/1 blk/2.5 tov

7. Andre Iguodala – You say boo to a less offensive-minded Iggy, I say huzzah to a more everything-but-offensive-minded Iggy. And I’ll go one further and ask you what you have against being less offensive? “Chris Tucker, Eddie Murphy and Bernie Mac all went the less-offensive route and I’m sure we can all agree their best stuff was produced during these periods!” – a drunk Adam trying to make everyone in the room hate him.
Season Projections: .469/.714/0.5 3pt/14.5 pts/6 rbd/6 ast/1.5 stl/1.5 blk/2 tov

8. Paul Pierce – I haven’t owned Pierce in any league since 2006. That’s not by design, it just hasn’t worked out that way. Sometimes when you don’t own a guy for a year or two, you don’t fully understand his true value. Or maybe you overestimate the guy. I dunno. I think of the Celtics as Rondo and a bunch of hobbled geriatrics counting down the seconds until Judge Judy comes back on. Perhaps that’s why I had Pierce way down this list my first go-round. Then I yanked my skull out of my tuckus and corrected things a bit. He’s still one of the more well-rounded players in the league and he doesn’t have the same mileage as the other 67 percent of the big three. Add that to the fact that this is likely the C’s last run at a title with this roster, you best believe wild horses couldn’t drag Pierce away from going hard to the mothereffing paint (if I may mix my songs and musical genres).
Season Projections: .470/.840/1.5 3pt/19 pts/5.5 rbd/3.5 ast/1 stl/0.5 blk/3 tov

9. Dorell Wright – Dorell the Explorer’s placement here at no. 10 wouldn’t have surprised me back in June or August or October. I mean, sheesh, he played 18 more minutes per game last season than he did the season before on a full-throttle offense. So it doesn’t surprise me that he’s here, I just don’t know if he’s staying long. That’s just me, you may be different. Unless you are my reflection, in which case, I’m tired of telling you to stop looking at me all the time! Anyway, the only way I could have been surprised by not ranking Wright in the top 10 would have been if you drove your Delorean from today back to April and showed me that Wright shot a dusty .406 from the floor over the last three months. Then, maybe I would have been surprised. But my surprise would’ve stemmed mostly from you having a time machine and not telling me about it before now.
Season Projections: .420/.780/2 3pt/15.5 pts/5.5 rbd/3 ast/1.5 stl/0.5 blk/1.5 tov

12. Omri Casspi – Quick! Think of a member of the Cleveland Cavaliers roster! Quick! Who came to your mind after LeBron? Mo Williams? Ron Harper? Brad Daugherty? Yeah, until Irving or Thompson show us something, Casspi is this team’s best fantasy option. Think about THAT.
Season Projections: .445/.700/1.5 3pt/14 pts/6 rbd/2 ast/1 stl/0.5 blk/2 tov

14. Nicolas Batum – Euro stud spends three seasons developing, then has a breakout year as a wing alongside one of the NBA’s best forwards on a playoff-bound team. Pop quiz! Am I talking about Batum next season or Peja Stojakovic in 2000-01? I guess it depends on whether Chris Webber is prepared to un-retire and be one of the league’s best forwards next season for the Blazers.
Season Projections: .470/.830/1.5 3pt/14 pts/5 rbd/2 ast/1 stl/1 blk/1.5 tov

15. Corey Maggette – You have to wonder what Maggette-O’s season with the Bucks would have been like if he hadn’t injured himself early, missed a smattering of games (note: smattering = 14-17) and never really found a way to fit in the Bucks’ system. I suppose you don’t have to wonder, but it might behoove you and I’m pretty sure horses are the only ones not into being behooved. Still, there ain’t much going on in Charlotte, not many guys to take a whole lot of offense away from him and what-not. Fair warning: I’m going to type that last sentence for everyone on the Bobcats. Get used to it.
Season Projections: .455/.830/0 3pt/18 pts/6 rbd/2 ast/1 stl/0 blk/2.5 tov

18. Andrei Kirilenko – From a per-game standpoint, Kirilenko is one of the most well-rounded players in the league. He’s also missed 23 percent of his games throughout his last seven seasons. He’s never missed fewer than 10 games. How lucky do you feel with Miles and Hayward waiting in the wings? Or ON the wings, if we’re standing on a basketball court.
Season Projections: .460/.750/0.5 3pt/11 pts/5 rbd/2.5 ast/1 stl /1 blk /1.5 tov

19. Carlos Delfino – I can’t make heads or tails of Delfino (that joke may have been made too soon after Delfino’s concussion from last November. Go ahead and Google “Delfino+concussion.” The first entry is from November 16, “Delfino out with concussion” and goes on to say he’ll miss two weeks. The next entry says, “Delfino is eyeing return from concussion in two weeks,” dated January 7. I don’t think two weeks means what they think it means.)  Aaaaanyway, Delfino plays 32 minutes a contest, but he only gets noticed when he bricks his fourth consecutive shot and everybody goes, “Whoa. Wait … how did Delfino sink two threes shooting like this? And where did those six rebounds come from? I remember him making, like, two free throws in the second quarter, I think.” So just as you’re getting used to Delfino having produced a fair amount for a post-12th-round pick, you look at his box score and realize he took too many shots, didn’t get to the line much and carried a stinkin’ 13 PER (my box scores are mad detailed, yo!) So then you go back to thinking he’s just an okay role player and you let it go. But then you miss Kirilenko and Maggette in the draft and you’re looking down the barrel at a third Utah forward or some shizz and you totally forgot that Mike Dunleavy was traded to the Bucks, but there are only four seconds left on the draft timer before it autodrafts Jameer Nelson for some damn reason and you realize that 11/4/3, with a peppering of steals and threes will do in a pinch. What I have just described has happened to every Carlos Delfino owner everywhere over the last two seasons.
Season Projections: .400/.760/2 3pt/11 pts/4 rbd/3 ast/1 stl/0 blk/1.5 tov

20. Gordon Hayward – … And baby makes three! RUN ON JAZZ! Actually, if you ask me,  jazz music already runs on quite enough without help from Hayward, thankyouverymuch. Who’s got time for a third upright bass solo, really? I could have put Turkoglu or Derrick Williams or Jan Vesely here. I know, I know. But the former ain’t no fun and the two latter are less proven and more crowded than this Jazz situation here. I’m taking a risk. Celebrate it. Anyway, three top 20 SFs on one team probably means two things: 1) none of them are having breakout seasons without a trade being involved, 2) they won’t all just rotate at the three, and will likely alter the playing time for the Utah two and fours, and 3) I said it meant two things. You have no business looking at no. 3!
Season Prediction: .435/.735/0.5 3pt/11 pts/3 rbd/2 ast/0.5 stl/0.5 blk/1.5 tov