Welcome back to DFS Dunks! Today marks the final regular season Thursday Night DFS Dunks edition and the 23rd for the season.  The NBA play-in tournament begins April 12, so we’ll be looking at either a showdown or very small slate next week.  I’ll have you guys covered through the playoffs as small slates and playoff showdowns are my specialty. The past week has been wild. We’ve seen a few 25-point comebacks, we’ve seen guys off the street play 40+ minutes for the Thunder, and most importantly, we saw the Lakers get eliminated from the playoffs. “We Beat LA” is my go-to Celtics t-shirt.  Some of tonight’s games are meaningless for the standings (only two games left on the schedule) so we may see some silly lineups (Lakers) and players get ruled out before game time so make sure to pay attention to the news. Ok, let’s get it!

If you’re new to this article, I break down tonight’s seven-game NBA slate and give you my starting five for both FanDuel and DraftKings.  These will be my core plays (guys I’ll be playing in my lineups with my money) for hitting the cash line.  Due to all the protocols, injury management, and general rest of players a lot can change from now until tip-off.  There’s a good chance I’ll use a player or two not listed here so make sure to follow me on Twitter for any important player swaps closer to lock.  At the end of the article, I’ll have a pool of three to five players I like that you can use to fill in the rest of your lineups. It’s important to have a process in DFS so let’s review the strategies I use.

Dejounte Murray is out again tonight missing his fourth straight game and Tre Jones has shined in his absence, playing 33 minutes in each of those games, averaging 1.05 FP/M and 37 DraftKings points in that span. The Timberwolves run at the fastest pace in the league and have the second-worst defensive rating over the last five games. Plenty of opportunity for Jones tonight in an uptempo games.

Scary Terry has seen his price drop dramatically since the $8400 tag on March 19. He’s has some so-so games a long the way but I think this is the perfect spot tonight vs the Magic. Orlando is allowing 14 3PM a game over their last 10 and Rozier is averaging 8.2 3PA on the season. Charlotte will want some momentum going into the playoffs and I think Terry get hots tonight.

The Magic have been eliminated from the playoffs and the Hornets have clinched a spot in the play-in tournament but could improve their seeding over these next two games so I fully expect the Magic to get blown out in this game. Ignas has played 36+ minutes in each of the last two games with a 20% usage at .85 FP/M. The Hornets run at a fast pace as know and Orlando is without Wendell Carter Jr., Cole Anthony, and Franz Wagner. Charlotte gives up a lot of fantasy points to big forwards, sixth-most to be exact. This price is too cheap on both sites. Lock him in. 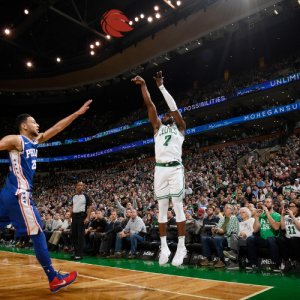 This game’s total is only 227.5 likely because the Celtics have the best defensive rating in the league but let me tell you why Jaylen Brown is going to win the tournaments tonight. Over the past five games Brown has averaged 50.85 DraftKings points. The Bucks surrender 14 3pM a game on the season, worst in the league and run at the fifth fastest pace. Brown is shooting 54% from downtown over his last 10 games and I foresee five or six 3PM tonight. In two of the last three meetings between these two teams, the total went over 230 points, the one that didn’t (220), Giannis did not play in.

The Sixers, Bucks, and Celtics are separated by half a game for the 2-4 seeds in the East. I expect all of them to play for the win tonight but I like Embiid the most tonight. I think he really wants to win MVP. He’s currently ahead of LeBron, Durant, and Giannis by .5 points in the scoring race and I think he’ll put a stamp on that tonight vs the Raptors weak interior who rank 26th vs. versatile bigs.

*LeBron, AD, and Westbrook are all listed questionable tonight and likely will not play so we should have some Lakers value opening up later. Malik Monk, Austin Reeves, and Stanley Johnson should become playable when we get the official news the big three are sitting.

MEM vs DEN – both teams are top-10 in pace over the last five games.