After one week of regular season play, the NBA has started in a less-than-predictable way for most teams. DFS and annual fantasy leagues are humming right along, with many of the usual suspects producing as expected. Just as we thought, the best team in the Western Conference are the Portland Trail Blazers, Utah Jazz, and San Antonio Spurs. Everyone saw that coming.

Similarly, the Eastern Conference has been equally predictable, with both the Philadelphia 76ers and Miami Heat starting 1-3, and the Brooklyn Nets at 1-2. One point of normalcy is the Milwaukee Bucks and Boston Celtics currently sit atop the east.

To no one’s surprise, the Los Angeles Lakers are thus far, as dysfunctional as you would expect. Both LeBron James and Anthony Davis are already banged up. Both injuries are considered minor, but noteworthy considering LeBron’s age and Davis’ injury history. Russell Westbrook is bad. So bad, he left the court, fresh off a 0-for-11 shooting performance, describing his game as “solid.” Delusion comes in all shapes and forms, folks.

Russell Westbrook felt he was "solid" vs. the Clippers Thursday night

The shorthanded Los Angeles Clippers traveled to Oklahoma City. With both Kawhi Leonard and Paul George out, others were given the opportunity to step up.

John Wall: An efficient performance in part-time duty. Wall logged less than twenty minutes, sitting in the fourth quarter with the Clippers down 16 after three quarters. He finished 4-for-9 from the field, connecting on 1-of-3 three-point attempts for 12 points – adding 2 steals, 4 assists, and 3 rebounds. Wall will become an important addition to your DFS lineups as the season matures.

Reggie Jackson: By contrast, Jackson finished 4-of-17 from the field for a brutal 23%. Entering the season, Jackson is ahead of Wall on the depth chart. Jackson’s streakiness is nothing new, but more performances like this will open the door for the 5-time All-Star John Wall to steal minutes from Jackson, and eventually the starting job. As Wall becomes more familiar with the offense and is reacclimated to the NBA pace of play, after an entire year off, he could be the starter at season’s end. For what it’s worth, this game was an improvement over Jackson’s previous game in a miserable showing on Sunday against the Suns.

Luke Kennard: Your favorite white guy was solid. Kennard bucketed 3-of-7 three-point attempts, finishing the game with 15 points and 4 rebounds. Once this team is healthy, the biggest issue for Head Coach, Tyronn Lue, will be getting Kennard on the floor, as his long-distance proficiency will be important. Paul George, Terrance Mann, and Kennard all play the position. Some lineup gymnastics are needed to make this work. A good problem to have. 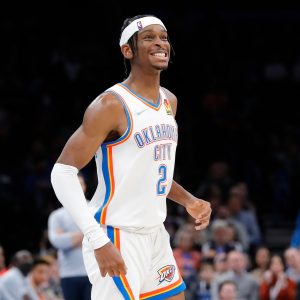 Shai Gilgeous-Alexander: The most underrated offensive player in the NBA, Shai continues to be invisible to defenders, shooting 50% from the field, assisting on 8 buckets, stealing 3 and ripping down 5 boards from the point guard position. Big men play big, actual height need not matter. Sure, the Clippers were shorthanded and Shai did not have to deal with two of the NBA’s best perimeter defenders in Leonard and George, but we cannot discount this performance.

Tre Mann: Tre was just that, the Mann. His 25 points helped pace an easy victory over the Clippers. No Josh Giddey meant more floor time for Mann, and he did not disappoint. A season-high 25 points for Tre.

Like the Clippers, the Pelicans played with their two best players out. A rejuvenated Zion Williamson and Brandon Ingram were both sidelined for the matchup with Dallas. New Orleans escaped victorious on a missed buzzer-beater by Luka Doncic.

C.J. McCollum: C.J. overcame a poor shooting night and found other ways to lead his team to a win and produce on the fantasy side. Despite a 6-for-20 shooting night, McCollum tallied a robust 11 assists to go along with 14 points. 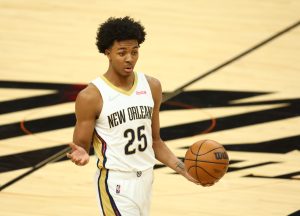 Trey Murphy III: No Herbert Jones? No problem. Is shooting 100% from the field good? Oh, okay cool… How about 8-for-8, including 4-for-4 from long range? Google efficiency – find this stat line. Murphy III swapped bodies with Mark Price – now shooting 60% from three-point land for the 2022-23 season. 5 boards for Murph-dog as well.

Luka Doncic: My name is Luka and I live on the second floor. I live upstairs from you, why don’t you pass anymore? Luka must have the ball in clutch moments, and he did, with a chance to win it. We will not hold the miss at the end of the game against him. One man can only do so much. Besides, the stat line was godly, per usual: 37 points, 11 rebounds and 7 assists.

Spencer Dinwiddie: Dinwiddie was on when called upon. Dallas may be The Luka Show, but Dinwiddie is a great supporting actor. Spencer poured in 24 points, going 8-for-15 from the field, and banging 4-of-8 three-point attempts. Through three games he has yet to shoot less than 46% and is connecting on 60% of his three-point attempts. The sort of production needed to take some pressure off Doncic.

Every year the Wizards come out like the ’96 Chicago Bulls. This season is no different. A fast start has Washington 3-1 after an impressive win over the Detroit Pistons.

Bradley Beal: The Wizards did not need Brad to win this game, and that is important for the team and the Real Deal Beal, as he is nursing a back injury. Back issues are nothing to play with. I may be biased since I am 43 and my back is as reliable as Antonio Brown, but still – Beal being able to play 22 minutes in a lopsided win is nice. Washington only has this luxury because other players have stepped up.

Kyle Kuzma: Kuzma always carries some stigma from his Lakers days. Perceived by some as lazy, not a diligent worker, and a bit of a diva, but he has made great strides to shed that image. The beauty of this for the Wizards and Kuzma fantasy keepers is his versatility and ability to fill a lot of different buckets. He does not need to score heavily to put up fantasy points. Kyle scored 25 points in 27 minutes and added 6 rebounds. Since joining the Wizards and taking on a more assertive role, he has reached career highs in points per game and rebounds. As a former complementary player, he has stepped into a lead role. The longer the Wizards can continue their winning ways, the more flexibility they have with Beal, allowing him more rest. Kuzma will look to be a score-first player.

Will Barton: A great offensive addition, Barton has a wealth of experience, and can be looked to as a leader. Now in his twelfth year, few players can boast they improve year-over-year. He finished yesterday’s game 6-for-9 with 16 points, while converting on 4-of-6 attempts from behind the three-point line. 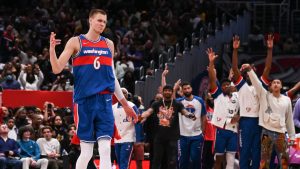 Kristaps Porzingis: Written off and left for dead after his time in New York and Dallas, Porzingis is still as good as he once was. The only questions have been his toughness and durability. So far, so good. 20 points in twenty-seven minutes, adding 7 boards with 4 of those on the offensive end, which opened up second-chance points for the squad. It is early, but the free throw percentage is a bit concerning. His previous career low from the stripe is 78.6%, so I have no doubts the 57% in 2022-23 will be resolved.

Cade Cunningham: Cade is the guy. The Pistons are a young team and counting on a very young Cunningham to lead them. He was effective; however, he is but one man in a five-on-five sport. 7-for-19 from the field with 3 rebounds. The Pistons need more from him to compete.

Bojan Bogdanovic: Bojan has been everything Detroit wanted, and more. The only true veteran on the team that will log major minutes this season, he will be counted on to help steady the team and produce. He is certainly doing that so far. He led the team with 25 points – dropping 4-of-7 three-point shots. A late-round pick in most fantasy drafts that has provided wonderful value for fantasy owners and DFS players alike.

In the fourth quarter, the courtside TNT team said, “this game means more to the Suns than the Warriors.” That is true, and rightfully so.

Klay Thompson: Thompson with a career first. His first ejection came in his tenth season with the Warriors. He was sure to remind Devin Booker he has never won anything as he left the court. Advantage Klay. For a stat line in last night’s game – it was not so hot. Klay finished with 2 points, 2 assists and 1 ejection.

Jordan Poole: Jordan was electric. When he got his opportunity to shine, he did just that. Razzling and dazzling, with an array of moves including step-back threes pointers, off-hand wiggles, and closing near the basket. An efficient 50% from the field for 17 points and 5 helpers. It was just not enough. Phoenix was not going to lose this game. 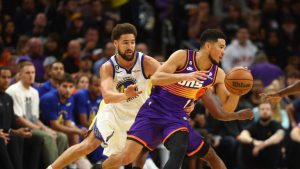 Devin Booker: Another day, another 30 plus point performance from Booker, as he got to the free throw line a lot, hitting 11-of-14 from the stripe. He added 7 assists and 3 steals to go along with 34 points. This is Booker’s third 30-point game in the first four games of the season.

Chris Paul: Old Man River is still the best ball distributer in the league. Paul dished out 9 assists in yesterdays’ game, added 7 rebounds and 16 points, in which 12 of those came from behind the arc, finishing the game 4-for-5 from deep.

Long haul: I like Terry for the season. If he is traded, I go CP3. As rumors go, it may mean nothing, but Rozier with the Lakers does not seem like a great fit for his individual production.