I figure y’all don’t need reminding that these aren’t your father’s Rockets. I don’t even think these are your brother’s Rockets either, especially if you don’t have a brother. That kinda eliminates you out of the metaphor. But the point stands, the Rockets are basically last year’s Rockets in that this is a team still in rebuild mode. But, as one of the dozen or so Padres fans from another ball sport (heehee balls), one can be accustomed to a bad team and still like the parts on it. In this, I guess “mechanic” type metaphor, parts are people and before I start getting too random, yes, the Rockets will be terrible, but that doesn’t mean there won’t be some non-terrible things on it. I guess I could have just said that and saved 250 words of bad metaphors. Hmm.

The Denver Nuggets defeated the Brooklyn Nets 124-104, behind a well-balanced scoring attack and more Nikola Jokic brilliance. Seven Nuggets’ players scored in double figures, led by the Joker, who finished the game with 27 points, 12 rebounds, 10 assists, two steals, and one block. It was Jokic’s 14th triple-double of the season and the 71st of his career. Will Barton added 21 points, six rebounds, four assists, and one block. Aaron Gordon tallied 17 points, nine rebounds, seven assists, and one steal. Monte Morris chipped in with 12 points, five rebounds, and eight assists and Jeff Green finished the game with 12 points, five rebounds, one assist, and one steal. Bryn Forbes (11) and Zeke Nnaji (10) also scored in double figures. Forbes (25), Nnaji (20), Bones Hyland (17), and DeMarcus Cousins (16) played the most minutes off the bench.

I was chilling out with pops the other night. Yes, your Son is actually a son. I know, mind-blowing. Anyways, we were chatting about who the superstars in the league are. Giannis, LeBron, KD, blah blah blah. Then Jayson Tatum came up. My pops shook his head…..which way though? Up and down or side to side? It was side to side with a crooked frown. For full transparency, he is a Lakers fan but he does know his hoops. He has skills, he said. He can score, he said but he’s missing that extra element that vaults him into the upper echelon. My response?

I’ve seen him do fantastic things that make me go, daaayyam. I also remember that he and Kobe would train and converse so Mamba passed down secrets, no? Then I remember those games where I’m left completely underwhelmed. Well, last night, Tatum knocked on our craniums with….

It was the eighth time Tatum has gone for at least 40 points in his career! Now, Tatum is shooting 42% from the field on the season. He has never finished with a mark below 45%. The early-season struggles may be dissipating as he’s been shooting over 50% from the field over the last seven games. Tatum was being drafted at the back end of the first round in most drafts. While he scores a ton of points, the efficiency has improved, and he chips in tres, boards, and some dimes, the defensive stats are lacking at 0.9 steals and 0.7 blocks. Fine, they aren’t exactly lacking but in order to be a first-rounder, he will likely need to be in the 1/1/1 club. Get your act together, Tatum!

After a heartbreaking first-round exit, the Dallas Mavericks made relatively small adjustments over the offseason.  That’s not to say the past few months have been without drama in The Big D.  At the center of the post-season speculation was Kristaps Porzingis, who had a rough series against the Clippers.  While there may have been some talk of shopping him, it likely dissipated when the Mavs realized the extent of the decrease in trade value.  Other trade rumors involved the Mavs making a deal with the Raptors to bring Goran Dragic to Dallas.  That deal hasn’t materialized, but stay tuned.  In the meantime, the Maverick core remains intact, as Porzingis remains on the roster and Dragic is still in Toronto.  With real-world expectations running high for another season, let’s take a look at the roster from a fantasy perspective.

With Luka Doncic sitting one out, Dallas’ offense flowed through Tim Hardaway Jr., and boy did he have himself a night. Hardaway dropped a career-best 42 points on just 23 shots, drilling six of his 10 triple tries and sinking all 10 of his attempts from the stripe. THJ (57 percent owned in Yahoo!) is as streaky as they come, but if Doncic misses any more time the opportunity will be there for oodles of points and treys.

6 turnovers?! Giant stiff. Joker’s dominance is getting laughable, and he’s the current no. 1 overall player in Yahoo! What plaudits can I add? Well, he put the fear of god into Jae Crowder in a game earlier this season, and Crowder’s one of the scariest dudes in the league. You’ll see why I loved that particular moment in, uhh, a moment. Jamal Murray put up 26/6/5 with a strong night that included a step-back, buzzer-beating 3-ball to force OT, but it’s tough to win top spots when Joker is your co-pilot.

I’ve got to admit. I was a D’Angelo Russell hater before he came to the Nets. The incident where he exposed Nick Young as a cheater by filming him, talking about it, and posting it on social media made me think he was kind of a bonehead and a snitch. I also thought he was a guy who would never meet the expectations of being the number two overall draft pick. I also, was not a fan of his game from a fantasy perspective. He turned it over too much and he had poor shooting percentages, both from the field and the line, while contributing almost nothing in the way of D stats. However, since being traded to the Nets I have changed my tune on him, especially this season. He made a huge improvement in his FTs, going from 74% last season to 81.8% this season. He also upped his assists by 1.5 while not adding too many turnovers, and upped his scoring by nearly 5 points. He has also shown the ability to absolutely take over games and last night was one of those nights. D-Loading went 6-40-1-7-2-1-4 on 14-of-31 shooting and 6-for-6 from the line. It was also his 23rd birthday, so as a Nets fan I felt compelled to give him the lede. It’s hard to believe he’s already a four-year veteran, but that’s what happens with these one-and-done guys. They also can take some time to fully download.

There was a huge slate of games last night so let’s dive on in to the daily notes! 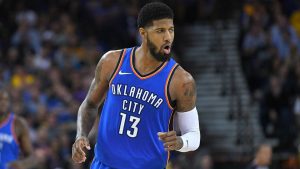