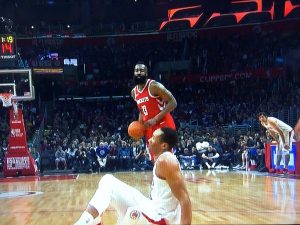 I usually reserve the lede for the best statistical performance of the night, as numbers don’t lie. Neither do hips. I learned that from Shakira and my elementary school basketball coach. Anyways, last night James Harden‘s line was:

For Harden, that’s one half of basketball. No matter, though, because Harden went Cobra Kai on Wes Johnson and put him in a body game. Literally. Figuratively. Twitterively. Spiritually.

Every angle, replay & slow motion zoom on James Harden breaking Wesley Johnsons’ ankles and disrespectfully staring at him before knocking down a three! pic.twitter.com/WaB3TqSqEa 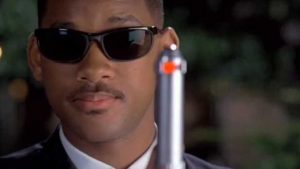 Just playing. I still believe. It’s tough for G having to carry the Bucks every night. Shit ain’t easy. Look at how tired Atlas looks in every picture and sculpture.

Only played 18 minutes, but that was 18 more than I expected. If you own Jabari, that’s a very encouraging sign, as the Bucks let him play on the second of a back-to-back after posting a season-high in minutes the night before.

The Bucks got smoked by the Pistons, 87-110, so dudes like Sean Kilpatrick received 26 minutes of run. It got so bad that DJ Wilson and Xavier Munford both played eight minutes.

How long before it’s an empty Lake in Michigan?

Led the team in scoring and minutes played with 30. Don’t get too happy, though, as this Johnson basically got sloppy seconds.

OG Anunoby left the game after spraining his right ankle.

Only thing he doesn’t do is block shots. So solid across the board. Top 30 player for fantasy.

Played 28 minutes. Like Siakam, won’t get a ton of run, but he’s a blocking fool (1.7 per game). After his playing days are over, someone will hire him to run their Twitter account.

Can’t believe this is his fourth year in the league. Seems just like yesterday. Anyways, I still think he’s going to be a superstar in the league. The guy can literally do it all. Now, for this season, it’s been four games since he returned from injury. He should start getting ramped up again pretty soon here and become the Commissioner that we all know and love.

Like Gordon, Vucevic has now played four games since returning from injury. He’s scored in double digits in every game and stuffed the stat sheet in all but one. I think he’s primed for a big end to the season as well. The Magic stink at defense, so they are going to have to score points.

Only played 19 minutes, but still performed. Tough to trust anyone that only gets 20 minutes of run. With that said, have you seen the Mario speedrunners? I’m all in on Mario now.

If you want BS (boards and steals), TY is your man. You’re welcome.

Played 35 minutes. Plays a ton of minutes and gets plenty of opportunites to shoot. As long as you don’t expect him to stuff the stat sheet, you’ll be fine.

Played 16 minutes. Aiya. He was in some foul trouble, but man…..I was feeling all good in the preseason. Kicking up my feet on the table, listening to some jazz, and dreaming of fantasy goodies delivered from Myles all season long. Now, it’s just pure rage. Before. After. The upside is always there, but just can’t expect any kind of consistency.

Played 34 minutes, primarily due to the fact that something is wrong with the Odometer. I actually have more confidence in Sabonis, as I know that Arvydas always plays hard.

Played 30 minutes. He’s played at least 30 minutes in only two games this month. Usually he languishes in the low-20s. Because of that, you can’t trust him unless someone goes down. Here is Lance in a nutshell:

Commentators perfectly explained Lance Stephenson in one sentence:
“He’s the type of player who keeps both teams in the game”

Played 27 minutes. Should only get better and more productive as the season winds down.

Played a whopping 35 minutes. Prince has really started to play well. Can he be trusted? Probably not, but the minutes will be there, the shot attempts will be plentiful, and he does contribute in everything but blocks.

Outside of the 1 rebound game back in December when he only played five minutes, the three boards last night were a season-low. Looks at scoreboard. Celtics 134. Oh, that probably means they didn’t miss too many shots.

Kemba has scored in single digits just twice this season, and both times he scored nine points. Not bad. Not bad at all. As for the D stats? You don’t get stats for D when you play no D. Forgetting to bring the D is never a good thing. Imagine you get that booty call at 1 am and you forget the D?

Played 22 minutes. In fact, no Celtic played more than 25 minutes and 10 players received at least 20 minutes of run. That’s what happens when the other team forgets the D.

Stevens has been talking up Monroe a bit lately. I’m not buying it. Monroe is too much of a liability on defense to get any significant amount of run.

If Everyone Loved Raymond, what would they do if he brought the D too? Draymond never has to worry about being called Raymond at Razzball. Guy is phenomenal.

Kevin on the other hand? No D stats last night. Kevin U-Rant? Ha! KD is blocking 2.4 shots per game, so I’ll stfu now. With that said, what he should be doing is blocking all his burner accounts on the the Twitter machine.

Played 30 minutes. I wouldn’t make too much of last night’s performance. Shit happens.

I’d like to quote me from yesterday, “Has really stepped up and asserted himself on the offensive end with Wall out. Now has access to a fantasy ceiling.” That was exhilirating. So have the fantasy performances from Otto.

Played 34 minutes. Reminds me of Taurean Prince a bit. Oubre plays on a much better team.

The more I watch Bender play, the more I want to drink. And I haven’t had a drink in years. Yes, he can shoot from downtown, which is nice for a big man. But…..he gets punked down low on defense and he throws up some horrific shots at times.

Played 40 minutes. Take what I wrote about Bender and spin the record backwards. semit ta stohs cifirrioh emos pu sworht ag’sgna’rkgh’arg’sj’asljg’asg’dsjg’algh’asgh’asg’asfjasdkf. Ok, then. That didn’t turn out so well. The more I watch Jackson play, the more impressed I am. He’s draining the outside shot with confidence and attacking the basket when given a chance. JJ is also contributing in the periphery stats. Looks like he’s going to be a good one.

Rib looks okay to me. Still boggles the mind that he didn’t even start on his college team.

Played 39 minutes. The perfect situation for Elf to be in. I can see plenty of messing around down the stretch.

That’s now four straight double-dubs for Green. Points, boards, and a few downtowners. And he’s averaging around 35 minutes per game over the past four.

Last double-dub was back in January. The cure for all fantasy basketball ills: the Phoenix Suns. I feel so bad for Gasol, as the team stinks. With that said, I’ve got a ton of respect for him because he’s still playing and isn’t bitching and whining.

Played 38 minutes. With Tyreke Evans and most of the backcourt options sitting, Harrison is doing his thing. He needs to be owned.

When I see a line like this from Melo, then I know all is right in the world.

Calm down, George. Take it easy. Save some for when you’re in LA.

Just like with Bruce Banner and the Hulk, you take the good with the bad when it comes to Russ.

If we ever get the time machine thing going, I feel very confident that we could send Adams back to the days of the dinosaurs and he would be able to thrive.

He will always be my boo, but shooting 39% from the field and 22% from downtown just ain’t cutting it. Just dunk everything!

Nerlens Noel played 16 minutes, the first time he’s seen action since November. I kind of feel bad for Noel, but then remember that he turned down a four-year, $70 million deal.

For a period there, it looked like it was going to be all R&R for Rondo, but he’s now dished out 12 dimes in three straight games. It’s not just the dimes, though. He’s been grabbing boards and scoring points. Since Boogie went down, the Pelicans are playing at the fastest pace in the league and the D has been bad.

LaMarcus Aldridge left the game due to an ankle injury. Not a laughing matter.

The D and rebounding stats will always be there. It’s all about the J for Murray, and I have the utmost confidence that he’s going to develop one. Chip Engelland is one of the best in the biz.

Played 24 minutes. First time cracking 20 minutes since he returned from injury three games ago. No Kawhi. No LMA. There’s an opportunity here for Gay. I doubt he gets 30 minutes of run a game, though, but he should be more and more involved as the season progresses.

Patty Mills has been starting at shooting guard and played 37 minutes and scored 11 points. Danny Green is now coming off the bench. He played 27 minutes and went 8/5.

Returned from a four-games absence and played 28 minutes. Remember when he was actually grabbing boards and dishing out dimes? Yeah, me neither.

Played 28 minutes. The minutes are erratic, but 4 dimes and 2 3s a game can usually be expected.

Played 29 minutes. The last three games? 29, 25, and 21. I’ve heard that the trend is your friend. We shall see, won’t we? It’s hard to imagine that the minutes stay up near the 30s, as he was routinely getting around 15 minutes a game. Definitely something to monitor, though, as Harrell can score, get his block on, and shot a sky-high percentage from the field.