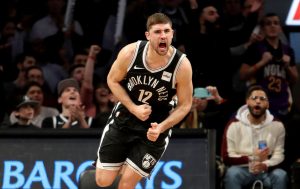 Average. Middle. Meh? I guess it all depends on perception. Someone born into poverty would be praised if he/she achieved average economic status. On the flip side, if you are a one-percenter, I assume that average would prompt seppuku. Average is often associated with boring. He/she was average in the sack. The higher above the line probably correlates well with intensity of orgasm. The flip side? Supplant higher with lower. Why does average get such a bad rap? It ain’t great, but it puts food on the table. It often gives 1.5 children and a white picket fence, if you are so inclined to have either. With that said, we are a “what have you done for me lately” society. We are all about celebrating the highs, while conveniently eschewing the trials and tribulations. Well, yesterday Joe Harris was not your Average Joe.

The CLE defense is atrocious, but let’s not forget about the……REVENGE!!!! Harris was drafted by the Cavaliers back in 2014. He played two seasons there, never averaging more than 10 minutes or scoring 3 points a game. During the 2016 season, though, Joe underwent surgery on his foot and was traded to ORL a week later. Then he was immediately waived. BKN picked him up and the rest, as they say, is history. Two years with the Nets has produced…..wait for it (an homage to HIMYM)…..average results. This season, in particular, Joe is averaging 10.3 points, 3.3 boards, 1.5 dimes, and 1.8 downtowners in 25.1 minutes a game. He’s scored double figures in 41 of 71 games played, but has not eclipsed the 20 point threshold once. Anyways, I clowned him earlier in the season, but even with all the wing players that the Nets have, Joe has been getting consistent playing time for most of the season. He can shoot and is able to drive strong to the rack and finish. An Average Joe on most nights, but yesterday, he was anything but.

LeBron could be the lede everyday, as he’s been playing at such a high level night in and night out. Dare I say that is his average now? Anyways, any day an Average Joe decides not to be so average, that’s an insta lede.

Played 33 minutes. Love is back in the air and on the court. Here’s something to make you go hmmmmm. The first day of Love’s most recent injury stint began on January 31st. He proceeded to miss all of February. As Clark Kent was revealed to be Superman, Kevin Love has been revealed to be Cupid. No wonder his shot has been fine. He’s been shooting arrows all month long.

Played 17 minutes in his second game back from injury. It’s been mentioned that he will be on a minutes restriction. With that said, has the potential to double-dub on any night.

Second game back from injury and has played 15 and 16 minutes. If you need boards, Kardashian to the wire now. His return probably affects the playing time for Nance.

Played 33 minutes. Was also supposed to be on a minutes restriction. Well, when you’re in a dog fight with the Nets, the coaching staff all of a sudden doesn’t speak english. Que? No habla ingles.

Played 28 minutes and is the microwave for the Cavs off the bench. Clarkson channels his inner Kobe every night. Fitting that his first name is Jordan.

I have a sneaky suspicion that I’ll be ranking DM pretty high next year.

G and Middleton are a perfect combo….both in real life and 2k. Their skills complement each other so well. Bledsoe? Yeah, it definitely works. A nasty triumvirate they have in Milwaukee. 2.0 steals! Damn.

I have fantasy blue balls from Jabari. I haven’t been teased this much since my high school crush. Next year, though? It’s on like Donkey Kong.

Jason Terry played 29 minutes. What freaking year is it? I get it that the Bucks need a shooter on the floor, but damn…..

Heat vs Pacers went to OT, so keep that in mind when you see some of the lines.

J-Rich will always be my son, but he’s scored in single digits four of the last seven games. Practice that J, Richardson. Could be a beast if he develops that in the offseason, as the D stats will be there.

Bam Adebayo got the start at center and played 21 minutes.

Say Adebayo to Bam if you own him because you need to be owning Kelly Olynyk instead.

Played 32 minutes. The playing time does fluctutate, but KO just contributes more across the board than Bam.

He is who he is. A tantalizing fantasy asset with a sky-high ceiling….with an equally frustrating consistency.

Played 31 minutes. Almost messed around. That doesn’t mean that you should with CJ.

Played 33 minutes. The game before? 31 minutes. The first time all year that Milos has received at least 30 minutes of run in back-to-back games. With that said, the assist numbers have been a little underwhelming (4.7 for the season). I was told there would be dimes galore.

During the first two months of the season, Lou had five games with fewer than 10 shot attempts in a game. Since? Add 6 to 4 then subract 3. Now multiply by 8. Add 2. Subtract 9. Divide by 0. There’s your answer.

Played 20 minutes. JV had 12 points after the first quarter. Imagine if he received more than 22 minutes per game? To be fair, the Raptors did lose by 11 to the Clippers and Casey does goes small when trailing.

Played 19 minutes. Imagine if he received more than 22 minutes per game?

Kyle Lowry and DeMar DeRozan both scored 11 points. So cute. Did they get matching friendship bracelets after the game?

Got the start at point guard and played 27 minutes. Knicks trying to make that final end-of-season push. This team has no clue. Mudiay was the perfect captain for the SS Tank.

Played 32 minutes. Before the internet, there were times when I would watch a movie, eat at a restaurant, or enter a store without a clue of what to expect. That’s the experience of owning Beasley in fantasy.

THJ, on the other hand…..You know he’s going to crap out, but continue shooting regardless.

Aristotle said, “The whole is greater than the sum of its parts.” The perfect description for Otto Porter.

Remember when the city of Washington D. C. was reverberating with the chants of “We don’t need no Wall?” Well, how quickly things change. Speaking of….

John Wall has returned to practice but there is still no timetable for his return. With fantasy championships this week, I wouldn’t expect much from him even if he does return. With that said, acquire Wall to block your opponent from acquiring him? That’s what walls were designed to do, right?

Played 25 minutes in his first game back from injury. Kawhi 2.0. I’ve said it in the past. I’m saying it in the present. I will continue to say it in the future. Unless he’s not.

Got the start at power forward, as Zach Randolph was declared out, and played 30 minutes. I’m not a fan but acknowledge the potential. Will be interested to see how he develops.

Man, it seems so long ago when BogBog was way ahead of Buddy in the bet between Vivek and Vlade. Now, it’s Buddy in a landslide. USA! USA!

Played 30 minutes. If you could predict the number of minutes that Nurkic would play, I believe that you would unlock the mysteries of the Universe.

A good game, no doubt, but not Dame Dolla worthy.

I love how that can be used for both good and bad situations.

When I acquire my time machine, the only man I’d trust to go visit Dinosaur times would be Steven Adams.

I believe Russ had like 2 points after the first quarter. Like I said a few days ago, OKC needs to hire a “Get Russ angry” guy in order to unleash him Bruce Banner style. Or would that be Hulk style? Whatever. You get what I’m trying to say. Russ has been held to single digits twice this season. The Jazz in the second game of the season and the Magic last month. Ha!

All honeymoons come to an end. Brewer wasn’t going to stuff the stat sheet and shoot 10 times every night. With that said, he should continue getting around 30 minutes due to his defense.

Jerami Grant scored 17 points in 19 minutes, while Raymond Felton scored 11 points in 18 minutes. OKC came out really flat and were down 17 points after one quarter. Grant and Felton were instrumental in giving energy and life back to the squad.

After getting King’d the previous game, Prince bounced back in a big way. Does it matter that the Hawks still lost by 19? Naw. That’s the ideal situation for the process.

With Dennis Schroder sitting due to an ankle injury, Taylor got the start at point guard and played 32 minutes. Plug and play. Will dish out a few dimes, but not much else outside of scoring.

Played 25 minutes. I can’t wait until he starts asserting himself on the offensive side of the ball. He has a nice shot.

Played 29 minutes. The Allen Crabbe of the South.

Only played 30 minutes in the blow out victory. Doesn’t get me Harden excited.

Chris Paul missed his third game in a row, so Harden played the point with Eric Gordon sliding into the starting lineup at shooting guard.

EG PG. Sounds like one of my relatives in the Motherland saying EZ PZ.

Gerald Green played 32 points and scored 25 points. Joe Johnson played 29 minutes and scored 9 points. With CP3 out, everyone on the assembly line moves up a rung. Throw in an atrocious Hawks team and you have 25 and 9 points from Green and JJ.

C’mon Joe! I know you got those triple-dubs inside you. It’s only a matter of time.

Gobert against the team the Warriors put out there last night……No fair.

Quinn Cook got the start at point guard and played 35 minutes.

Led the team in scoring. Only one other player, Andre Iguodala, scored in double digits. Warriors scored 91 points. No more blurbs for you!!!