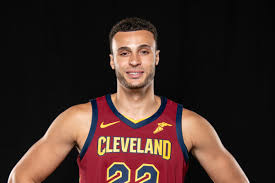 Back when Larry Nance Jr. was a Los Angeles Laker, younger Son had a Nance Romance. I’d watch this 6′ 7″, 245 pound poster maker get busy night in and night out. With his 7′ 1″ wingpan and 37.5″ hops, Nance would Statue of Liberty every dunk. It didn’t matter if there was a defender there or not. It was patriotism at its finest. Unfortunately, he was never able to get more than 22 minutes of run per game, as he was down on the depth chart, suffered an injury when the opportunity finally arrived, and his tweener status gave coaches the heebie jeebies. When he got traded to Cleveland, I was sad to see him go but was curious to see if he could thrive. Beep. Boop. Bop. You know what always thrives? The Stocktonator. Once again, the depth chart was not kind to Nance, but the team signed him to a four-year, $44.8 million extension. He had to play, right? Of course not because it’s the Cavs we are talking about. He could never carve out a significant role and primarily relied on injuries to get run. Well, here we are now. Tristan Thompson is out with a knee injury while Andre Drummond is nursing a calf injury. Last night against the Boston Celtics:

In 39 minutes. Nance has always been a good rebounder due to his athleticism and pursuit, but he’s developed a decent shot from downtown to go along with his handles and passing ability. He’s always been a maven for steals, as he plays the passing lanes well. The one conundrum has been the lack of blocks. He’s never come close to averaging 1 block per game despite receiving around 27 minutes per game during stretches. Probably has to do with overall defensive IQ, as athleticism isn’t the issue. Maybe he and Blake Griffin studied at the same dojo for how not to get blocks. Regardless, in nine games as a starter for the Cavs, Nance has averaged 35.2 minutes, 14.1 points, 1.3 tres, 9.9 boards, 3 dimes, 1.2 steals, and 0.8 blocks while shooting 50% from the field and 81% from the line. That’s equated to top 40 production for fantasy. Wouldn’t he be the perfect player for the Houston Rockets? Anyways, only use Nance when both Thompson and Drummond are out, or if the Cavs come out and say that he’s going to be the starting power forward from now on. Don’t hold your breath.

How confident were the Celtics brass about getting a W in Cleveland? No Kemba Walker. No Gordon Hayward. No Jaylen Brown. They gathered in the conference room and said, “Let’s see just how good JaySON Tatum is.” He’s really good, as he played 40 minutes and led the Celtics to a 112-106 victory.

How can a player be so good and so bad at the same time?

In 30 minutes off the bench. Got the run due to all the players sitting.

In 14 minutes off the bench. Second game back for Time Lord, after missing three months worth of action. He’s played 10 and 14 minutes. The Celtics three-headed center monster has Voltron’d up, so it will be difficult for Time Lord to have fantasy relevance. He just won’t get the minutes. He’s an intriguing streamer if injuries hit and is an exciting dynasty asset for boards and defensive stats.

Love was in the air, not physically of course. His credit card hops won’t allow that. Good things happen when the best players actually play. The Cavs seem to have an issue with that simple concept.

The first 40-burger of his career! I’ve really been impressed with how Sexton has developed. I thought he was an inefficient, one-dimensional player, but he’s shooting 46% on the season. Over the past three games, he’s at 54% and been a top 40 player! Points, tres, dimes, and steals are what he provides. A ton of Sexton is good for everyone.

Kevin Porter Jr. did not start because he forgot his jersey. Then, he suffered a head injury 10 minutes into the game and did not return.

Got the start and played 21 minutes in his first action since January.

Got the start and played 25 minutes. Since returning from injury, Carter has played 18, 23, and 25 minutes. This Carter Administration is slowly getting up to speed, but the trend is going in the right direction.

In 29 minutes off the bench. Over the past 10 games, Young has been a top 20 player. He’s been providing points, tres, boards, and dimes, but it’s been the 3 steals that have really boosted his value. With the Bulls getting healthy, the playing time is going to decrease back down to the low-to-mid 20s.

In 35 minutes off the bench. Talk about things going in the right direction. The usage has spiked to above 30 and the dimes have ticked up. He’s going to get run, as he is the future and current microwave off the bench. It all comes down to the shooting efficiency for White. During the hot streak, he’s been close to 50%, but on the season, he’s been sub-40% for most of it.

It ain’t hard to tell why Naz excels! Only played 25 minutes, which kind of sucks, but he’s still balling the F out. Unless Karl-Anthony Towns, Naz is a must own.

In 22 minutes off the bench. It’s vintage Johnson, as he’s contributing in every category.

In 27 minutes off the bench. If you need dimes and steals, McLaughlin is a viable pickup. He probably won’t get more than 20 minutes on most nights, though.

Get this joueur a wing in the Louvre!! 2nd in field goal percentage, 3rd in boards, 5th in blocks, and 5th in dub-dubs.

Top 50 player for fantasy. Usage rate is over 30. He shoots close to 20 times per game and converts at a 46% clip. He scores over 20 points. Provides tres. Grabs 4 boards and dishes out 4 dimes per game. He gets his 211 on. He shoots 85% from the line. Mitchell is so damn solid. He just doesn’t access the ceiling in order to vault him into the fantasy elite. I attribute that to the system in Utah.

In 30 minutes off the bench. It is no longer the holiday season, so the Jingles go into the garage.

In 32 minutes. Points and boards are what Randle do. He does usually chip in some dimes, though, but rarely does he provide the D. As a result, he’s not a top 100 player for fantasy.

Got the start and played 28 minutes. The prior three games, Elf played 18, 33, and 36 minutes. Elf can mess around on any given night, but he can also struggle and get replaced by Frank Ntilikina. Do you like to live dangerously?

The Grizzlies cut down the Nets, 118-79 in Brooklyn. As a result, there isn’t much to be gleaned here for fantasy relevance. If you insist, though, Tyus Jones led the Grizzlies with 18 points in 21 minutes, while Chris Chiozza was one point off the team lead with 14 points in 24 minutes. I told ya.

It was a battle between Duncan and Terrence. Duncan lost because he grabbed 2 boards and stole 1. Robinson is 11th in the league at 8.1 tres attempts per game. He’s 5th in makes with 3.5 per.

In 31 minutes off the bench. Dragic is the leader of the second unit and garners a 26 usage rate. He won’t provide the D…..ragic it is, but points, tres, boards, and dimes are plentiful. The shooting efficiency can be a concern at times. Old age has decreased his “finishing at the rim” rating.

Malcolm Brogdon only played 11 minutes due to a hip injury. T. J. McConnell entered the game and provided 14 points, 4 boards, 6 dimes, 2 steals, 4 turnovers in 30 minutes of run. He doesn’t just have nice hair. He can actually hoop. If Brogdon misses time, then he should see elevated run.

No other player on the Pacers scored in double figures.

In only 28 minutes. The team is too good! It’s holding him back! Get rid of the team!

In 23 minutes off the bench. DD is averaging around 24 minutes per contest and providing tres, boards, and some steals.

I thought for sure the 4 steals would’ve been a career-high, but nope. He pilfered 5 in a game back in 2011 and he’s had multiple games with 4 steals. You learn something new every day.

Oh, Shai. How I love you so. You do it your way. Using the court, dribbling a masterpiece like you Picasso. Just wait until the dimes start flowing. I’m not from the future. I just be knowing.

In 30 minutes off the bench. Dennis was scorching hot a few months ago, but now he’s back to being a menace, primarly because of the shooting efficiency. He’s still providing points, tres, and dimes though. I thought this was supposed to be a rebuilding year for the Thunder? They are currently 6th in the Western Conference. All hail Sam Presti. And they have 15 picks over the next six years!

Finally. Got the start and played 39 minutes. Sometimes coaches make things out to be more complicated than they are. Wood is a top 20 player who provides points, tres, boards, steals, blocks, and good percentages.

Got the start and played 38 minutes because Derrick Rose will be out for a few weeks with an ankle injury. He can provide pionts, tres, dimes, and steals. The percentages could be painful to endure at times, though. He’s going to get plenty of run for as long as Rose is out.

Was claimed off waivers and made his debut for the Pistons. McRae is a bonafide scorer with efficiency issues, but if he carves out a role as the Pistons microwave, he can make waves.

The Dallas Mavericks outlasted the New Orleans Pelicans, 127-123 in OT.

Words of his demise were greatly exaggerated. Should finish as a top 40 player for fantasy. The environment in New Orleans is just too juicy.

Played 32 minutes, only the seventh time all season with over 30. Favors is a low usage player, so don’t expect many points, but boards, defensive stats, and excellent field goal percentage are provided on the regular. The free throw shooting is poor, like with most big men, but at least the volume is light.

Top 25 player over the past 11 games. Top 10 over the past three! Lonzo can do it all….except shoot. There are times when he does shoot well, but he’s inconsistent and is converting 40% of his attempts on the season. That’s not why you’re rostering him, though. It’s all about the other counting stats. Lonzo be stuffing that stat sheet.

The #2 player over the past 10 games! Boy, was I wrong on Porzingis. I guess my master plan of drafting him at a discount next year doesn’t look so good now. He and Luka are going to be so fun to watch for the forseeable future.

The 23rd time Luka has messed around in his career! He’s played 122 games. The high turnovers, lack of blocks, and poor field goal percentage keep his overall value down, but F it.

All five Blazers scored in double figures, with four going over 20 points.

If you’re counting on Ariza to provide points, you’re doing it wrong. He’s a steals specialist who also provides some tres, boards, and dimes. The shooting efficiency is rough at times, but it’s on low volume so the impact is negated. He’s averaging close to 37 minutes of run per game!

Mt. Whiteside just keeps spewing out the fantasy goodies. Top 10 player on the season. He’s 6th in field goal percentage, 2nd in rebounds, 1st in blocks, and 2nd in dub-dubs.

Returned from injury and played 32 minutes.