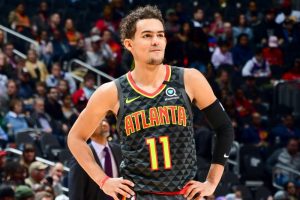 It was six o’clock in the morning. The dream of kissin’ Valentino by the crystal blue Italian stream was interrupted because someone couldn’t be late to work. Wouldn’t get paid if so. Just another manic Monday for the Bangles, who wished it was a Sunday because that was their fun day. At the other end of the spectrum is Dre Day, when Dre would stomp on the Easy-est streets and slap the taste out of his mouth and make him bow down. Sounds like a very enjoyable day for Dre. Which brings me to Trae Day. It’s not wrought with anxiety and regret like Manic Monday and, while it does bring pleasure like Dre Day, it’s not so vicious and raw. Trae Day is a happy day when fantasy goodies spill out from the pinata. Beep. Boop. Bop. You know what alwasy dishes out fantasy goodies? The Stocktonator. The great thing about Trae Day is that it happens so frequently that it’s become sort of ho hum. Last night was but the latest example.

Despite averaging close to 5 turnovers per game and not contributing anything in the blocks department, Trae Young is a top 20 player for fantasy. The usage rate is 35 and he AVERAGES 29.4 points, 3.4 Traes, 4.6 boards, 9.2 dimes, and 1.2 steals. He’s shooting 44% from the field and 84% from the line. Over the last four games, Trae is AVERAGING 15.3 dimes per game! He’s playing at such a high level on most nights that this is the expectation now. Just another Trae Day.

Over the past four games, Lowry has been a top 15 player! Primarily due to the 46% shooting from the field and 2.5 steals. He’s shooting 41% from the field on the season, so expect regression. In addition, the steal number is unsustainable. He’s more like a 1.3 per game thief. Regardless, he should be good for top 30-40 production at season’s end.

The shooting efficiency is always an issue for VanVleet. On the season, he’s shooting 40% from the field, but over the past four games, he’s been at 47%. The usage rate has surprisingly dipped down to 18 from 22. Nothing to be concerned about, though, as he should provide points, tres, dimes, steals, and finish as a top 30-40 player.

Love is writhing in anticipation for the text bubble to disappear and the message to appear. Unfortunately, Love’s current situation is…..

Where will Love end up? Hopefully we find out in the next week.

You know those videos where people place dominos or cards in front of each other? At first it’s in a single file line, then it curves, and finally branches out in multiple directions where a flower-like pattern blooms or some shit? Well, Sexton’s rookie season was when the crazy people were placing all the cards or dominos down. Painful, painful experience. The beginning of this season was when the cards started falling. Nothing too crazy, just in single file line. We are at the stage of orgasm when the flower-like pattern is blooming before our eyes. I never expected Sexton to be playing at this level. Not only has the shooting efficiency been great, but he’s been dishing out dimes. Over the past eight games, he’s been a top 60 player, shooting 48% from the field and dishing out 4 dimes per game. There will likely be regression, but he is shooting 46% from the field on the season, garners a usage rate of 27, is jacking up over 18 shots per game, and is still young, so development isn’t out of the question. In addition, the Cavs could be trading players, which could bring more usage to his basket. I’m not saying it’s real, but I’m not saying it’s not.

In 29 minutes off the bench. Porter is athletic, young, and can get buckets. He was mentioned as possibly being a top five pick before injuries and maturity issues caused his draft stock to fall. Now, he’s getting run and may have carved out a niche in Beilein’s rotation. Points, tres, boards, and steals are what he contributes.

Nice of you to join us again, Joel. It’s been two games since missing nine straight games. It would’ve been swell if you worked on your free throws, though. What were you doing? Tweeting all day? When it’s all working well, Embiid is a top 10 player. Unfortunately, he’s never played more than 64 games in a season.

Hey, Ben. Mark from BasketballNightlyNews. Got any comments for us tonight? Well, Mark, to all the haters and fantasy nerds who said that I can’t shoot and am only viable in punt free throw builds…..Punt this……as he sticks both middle fingers into the air. Over the past 14 games, Simmons has been a top 10 player. He averaged 38.4 minutes, 21.9 points, 9.4 boards, 7.4 dimes, 2.1 steals, and 0.6 blocks. He shot 62% from the field and 68% from the line. He did not drain a tres. Truly impressive stuff. Now, Embiid was out for most of that, so with Joel back, the usage will decrease and Ben should go back to being a top 30-40 player. That is the ceiling, though, and it’s wonderful. Imagine if he does shore up his weaknesses.

Got another start, his third, and played 35 minutes. Over that span, Shake has been rattling and rolling to the tune of 15 points, 2.3 tres, 5 boards, 3.7 dimes, and 1 steal. The usage rate is only 15 and he’s been shooting 65% from the field. Translation: this is not going to continue. Now, he’s been playing because Josh Richardson has been out due to injury, and he’s not expected to return anytime soon, so Shake could continue rattling and rolling for a little while. Don’t expect any 30 for 30s being made, though.

A season high in boards, but not a career high. That number would be 25. Points, boards, and excellent percentages are on the nightly menu. For much of the season, blocks were the nightly special. Many patrons have begun to question if they are a seasonal item.

Got the start and played 26 minutes. Probably a matchup thing with Embiid on the other side. Prior to last night, Jones played 22, 12, 10, and 1 minute. Alex Len and Bruno Fernando were both out as well. Nothing to see here. You’re blocking up traffic.

If you were to plot out Bridges game logs, the result would resemble an EKG reading from a live human. The peaks and valleys are good for humans, as it denotes a heartbeat. For fantasy basketball, not so good.

In 20 minutes off the bench. Willy has played 19 games this season. He has played fewer than 10 minutes in 12 of those games. But, but, but….the last two games, Willy has been “freed” to the tune of 20 and 19 minutes. It looks like he’s overtaken Bismack Biyombo on the depth chart for the backup center role. Willy is swap meet Enes Kanter.

In 27 minutes off the bench. Over the past four games, Monk has played 27, 23, 34, and 22 minutes. Prior to that, he had played 8, 7, and 13 minutes. The Price is Right song is blaring in my head right now. It’s time for the Showcase Showdown! Me thinks Monk is getting showcased for a trade. With that said, I’m not the sharpest tool in the shed so do with that information what you will.

In 23 minutes off the bench. This train has been diverted to a different track, but it’s still chugging along. Maybe Scott Brooks had traumatic experiences with Thomas the Train as a youngster and is acting upon it now. Or maybe Bryant is slowly being ramped up after missing games due to injury. As a great philosopher (so great that I forgot his name) said, “time exposes all things”.

Got the start and played 23 minutes. Yes, pick him up if he’s available. He’s starting, getting run, and we all know the potential. Am I worried about getting fooled by the banana in the tailpipe? Always, but we must live life with no fear. With that said, I’ve seen a rumor of Andre Drummond being traded to the Warriors for D’Angelo Russell. As a recent acquirer of Drummond in the RDA, I would love for that to happen. That would obviously nuke the value of Chriss.

In 24 minutes off the bench. The minutes have been shaved from 29 down to 25 per game. In addition, the shooting efficiency has plummeted, from 40% to 34%. Burks is more than likely getting traded, which will nuke his value even more.

In 27 minutes off the bench. Who said Smart can’t shoot? Looks to the left. Looks to the right. Looks to the guy in front. Checks out behind. If you can’t spot the sucker at the table within a few minutes, then it’s you. Well, I haven’t spotted the sucker. Smart is shooting 37% from the field on the season, but the free throw percentage is 83%. He provides some points and accesses ceiling when he shoots well, tres, boards, dimes, and defensive stats. Top 70 player on the season.

Like the Eiffel Tower, the Stiffel Tower has a foundation that is immovable, consistently provides awe, and represents a community and a nation.

My momma said that there’d be days like this. Don’t worry. Mitchell has been one of the most consistent players all year. Shit happens, like getting beat on the river. Over and over again. Yes, I’m still tilting from my home game.

In 31 minutes off the bench. Mike Conley didn’t play, so extra minutes and usage were available. Plus, Mitchell was terrible. Clarkson can score. How do I know? Because that’s really the only thing he’s done in the past, present, and likely future. I wouldn’t make too much of this performance.

This game just had a bunch of outliers in it. Craig is a low usage player who is on the court because of his defense. He doesn’t shoot often or provide many fantasy goodies. As in the Mitchell blurb, shit happens.

Ain’t no jokin’ about Jokic. #6 player over the past four games and #12 on the season. The ride hasn’t always been smooth, but the end result is usually magnifique. Over the past three seasons, he’s finished as the 13th, 12th, and 18th player.

In 25 minutes off the bench. He’s averaging 24.6 minutes over the past six games and been a top 50 player for fantasy. The shooting efficiency predictably came back down to earth (42% after a torrid start above 50%). Porter is a skilled offensive player. With his length and height, he can shoot over most defenders. That also helps him grab boards. The defensive stats are lacking but he does have range from downtown. The defense is the issue, as the Nuggets are a contending team, so if he’s a liability, he’s not going to play. Right now, there are some injuries, so playing time is there. That may not be the case when all hands are on deck. Something to monitor.

Dedmon has started the last five games and been a top 100 player. Boards, steals, and blocks have been provided. When Richaun Holmes returns, which could be sooner than later, Dedmon will be a fantasy dead man.

Bogdan Bogdanovic got the start at shooting guard and played 25 minutes, scored 15 points, grabbed 6 boards, and dished out 3 dimes. Buddy Hield played 26 minutes off the bench and scored 19 points, grabbed 7 boards, dished out a dime, and stole 1. The Kings defeated the Clippers, 124-103, so this split could be the N. W. O. going forward. Sucky for fantasy. Potential goodness for real life.

Kawhi Leonard did not play due to back tightness.

Returned from injury and played 19 minutes. Not so curiously, George was on a minutes limit and the rust from the long layoff was evident. We know what PG can do when healthy; provide x-rated fantasy stats. Unfortunately, the injury risk is high.