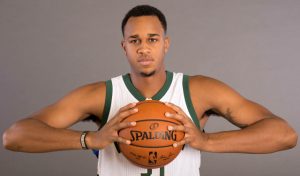 Most are familiar with chapter 3, verse 16 of the Gospel of John: For God so loved the world that he gave his one and only Son <Hey! That’s me!!!>, that whoever believes in him shall not perish but have eternal life. Before storm clouds gather up above and lightning fries my plump physique into a mush of cooking oil, I was just joking God. Ha ha. I’m probably fine because I’m sure he/she/it was overloaded yesterday, but….out of respect and….juuuuust in case. Anyways, because we go next level here at Razzball, I want to mention chapter 3, verses 18-19 of the Gospel of John: Whoever believes in him is not condemned, but whoever does not believe stands condemned already because they have not believed in the name of God’s one and only Son. <Hey! It’s me again!!!!> This is the verdict: Light has come into the world, but people loved darkness instead of light because their deeds were evil. Yesterday, the fervent followers and believers of the NBA were graced with a sermon from the Book of John Henson, chapter 3, verses 18-19.

Granted, it was against the Brooklyn Nets, a team that is atrocious against the center position. With that said, since Jason Kidd was fired as coach of the Bucks (seven games), Henson has averaged 29.4 minutes, 12 points, 7.57 boards, 2.42 dimes, 0.8 steals, and 1.1 blocks. As long as the Bucks do not trade for a center at the deadline, have faith in the Henson. Is it any coincidence that I am Son and John is a Henson? I thinks not. See the light and come out of the darkness. If the Bucks trade for DeAndre Jordan or any other big man, then you can tear the Book of Henson out, get on your knees, and scream to the heavens: Why have you forsaken me?

G left the game early due to spraining his right ankle. The injury does not sound serious, but he is listed as questionable for Tuesday’s matchup against the Knicks.

After missing a few games with an ankle injury himself, Bledsoe bounced back and looks just fine. With Malcolm Brogdon out, the minutes and usage should be plentiful down the stretch. 2.1 steals on the season, good for second in the entire NBA.

Played 31 minutes. Snell stinks. I don’t care that he had a +19 RPM. He may be a decent real-life player, but he’s terrible for fantasy. I’d rather have Sterling Brown.

Played 26 minutes. With Brogdon out, Brown could carve out a nice role for himself. The minutes may not be plentiful, but there’s upside. Open your mouth. Measure the opening with your index finger and thumb. Now, place your thumb on this line. Where does your index finger land? The upside that I speak of is there.

Played 17 minutes. I just don’t see how the Bucks give him more than 20 mpg. Keep in mind that I bet the under last night and took the Pats -4.

Got the start and played 27 minutes. I hope you all went to Jarrett.

Dinwiddie had a stretch of four games two weeks ago when he attempted fewer than 10 shots in each game. The past three games? 11, 19, and 13 shot attempts. He’s also played 29, 32, and 34 minutes. He has his ups and downs shooting, but the usage rate remains high and the dishing of dimes should be plentiful.

Caris LeVert played 23 minutes and scored 15 points, while Joe Harris played 26 minutes and scored 8 points on 3-of-11 shooting. Probably can’t be trusted, especially since Russell won’t be loading forever, but Atkinson loves to give these guys minutes so…..If you’re desperate, could be viable options.

Has played 35 and 28 minutes the past two games. He was averaging 17 mpg all last month. Smells like a Showcase Showdown to me. Lopez is owed $22 million this year then is an UFA next season. I’d be shocked if Lopez isn’t traded at the deadline.

Got the start at point guard and played 39 minutes. What a freaking draft for the Lakers last year. Kuzma and Hart at 27 and 30? Big, strong, experienced, and has a high basketball IQ. Has also developed his J over the past few years. Will have short-term value, but when Lonzo Ball returns, will go back to the bench. At least he seems to have leapfrogged Tyler Ennis on the depth chart.

Played 16 minutes. Needs Julius Randle to get traded and/or Ball to return.

Now that’s the Melo I know and hate.

We haven’t visited the WESTCON in a while. If my memory serves me right, we were at WESTCON 4. Keep in mind that I have a shitty memory. Anyways, with four straight losses in a row, I think we are approaching WESTCON 2 levels.

Don’t over exert yourself, Paul. Save some for when you come to LA.

I have a confession to make. I always draft Harkless in my 2k fantasy drafts. I’m always tantalized by the size and shooting ability, so I always root for him in real life. I know, I’m a weirdo. Anyways, he has potential, but my momma always said potential don’t mean shit. Here’s a look at the minutes for the last six games: 31, 7, 12, 0, 18, and 3. Have fun.

Played 20 minutes. Mr. Ed probably won’t get more than 20 minutes of run per game, but he can score, grab boards, and contribute in D stats.

So bad that I’m actually impressed.

So good. So smooth. So solid.

Played 28 minutes. Marcus Morris did not play. Neither did Greg Monroe. Ojeleye won’t be fantasy relevant when everyone is healthy, but he’s been getting minutes and the team loves him. Someone to keep in mind if opportunity presents itself.

I dated this girl a long time ago. She was cute, but had the most annoying laugh ever. It would literally make me cringe. But….she was cute. Sometimes, you gotta take the bad with the good.

I’m always fascinated when I first walk into a store. How the displays are set up. What are they trying to sell. Where is everything situated. More often than not, things in the front are items that represent a changing of the season, usually the upcoming one. Well, this is the time for…..

The trade deadline is fast approaching and teams are showcasing their assets.

Seems so long ago when NYC was on the verge of creating a new burrough for Porzingis. Both the hype and play have fallen off a bit, but he’s still a fantasy monster. With that said, both Melo and Kobe are like, “Bruh, you need to pass the rock.”

Played 22 minutes. First time he has received 20 minutes since mid-January. We know Willy Hernangomez will never play significant minutes, so there’s potential upside if he or Kanter gets traded. Per 36, O’Quinn is at 14.2 points, 12.2 boards, 4.2 dimes, 0.9 steals, and 2.2 blocks.

Played 27 minutes. Why? No idea, but this is a team that was giving minutes to Ron Baker. The last time McyDs received at least 20 minutes of run was back on January 15th.

Frank Ntilikina left after seven minutes due to a sore right knee. My hopes and dreams for the Frenchise are shattered, like for so many that try and make it big in the Big Apple.

Played 20 minutes. Will probably soak up the Frenchise minutes, but no way he takes over New Jack City.

Played 31 minutes. Has scored in double figures five straight games. Drew is going to play a ton of minutes, put up shots, and dish out dimes. That ain’t bad.

Played 35 minutes. I’m a Selden guy, so I’m biased. With that said, he’s going to play a ton and jack up shots. That ain’t bad.

You know what’s bad? The Memphis Grizzlies. No more blurbs for you!

Played 38 minutes. 12 straight double-dubs for Dwight. Dayam! He’s still 13 behind KAT for the season. DAYAM! He’s blocking 3 shots a game over the past 12. DAYAM!

Played 34 minutes. Has really been playing well over the past week or so. Not just shooting, but contributing across the board. Primed for a big second half.

Played 23 minutes. Probably won’t get more than 25 minutes of run per game and contribute too many D stats. With that said, not a baaaaaaaaaaaad day.

Played 23 minutes. Getting run due to the Marvin Williams injury.

Jay Triano had been going to the bar nightly due to Dragan’s poor play. Last night? “Honey, I’m going to bar for a Bender.” “But Jay! Dragan played well tonight,” said Mrs. Triano. “I know. I need to go celebrate!” That’s back-to-back solid games for Dragan. Keep in mind that Marquese Chriss did not play, but Bender is worth the pickup. He can score, board, dish out some dimes, and shoot from downtown.

Has scored 20 or more points in four straight games. Playing close to 30 mpg, jacking up a ton of shots, grabbing some boards, and getting  some D stats. JJ had a team-high 32.3 usage rate last night.

Played 31 minutes. The move to point guard has been a detriment for his fantasy value. He will dish more dimes, but the shot attempts are down. Also, the emergence of Josh Jackson doesn’t help.

Played 25 minutes. Will be the primary guy off the bench.