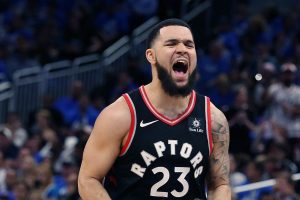 ….More solid than reinforced concrete. Plays lots of tricks and provides plenty of treats. Is not indiscreet when he provides the latent heat. Fills up most of the stat sheet. Is not from the main street. Yet remained upbeat. Put in the time until he became elite. This did not happen in a heartbeat. No conceit. Just a regular athlete who kept all the receipts to make the haters obsolete. Last night, turned the Bucks into mincemeat.

Led the Raptors to a 124-113 victory over the Bucks. On the season, VanVleet is the number 15 player for fantasy. The shooting efficiency is rough at 41% which provides volatility to his production. He’s scored at least 20 points 15 times this season, with four over 30 and one 50-burger. He’s also scored in single digits five times. With that said, he’s averaging 3.2 tres, 4.2 boards, 6.6 dimes, 1.7 steals, two turnovers, and 0.7 blocks. Fred Mutombo in the house! That block number will likely be unsustainable since he has never averaged more than 0.3 blocks in a season before but whatever. I’m not here to be a Negative Nancy. VanVleet is awesome. And it’s no wonder that the two Vs make a W.

This is the player I signed up for. Siakam has been a top 15 player over the past seven games. It’s about time! I got a question for y’all. How come when the internet goes out, the cable company doesn’t prorate my bill? But if I miss a payment then I get charged? That’s some Manute Bolshit. I wish stats were prorated for fantasy too, but it is what it is. Hopefully, this heater keeps continuing until…well, forever.

Returned to the starting lineup after a 10-game absence and played 27 minutes. Prior to going down with a calf injury, OG was posting top 40 production. May the Force be strong with this one.

Lowry injured his ankle in the second quarter. He was able to return but left in the third quarter when it was clear he could no longer play. He finished with 22 minutes.

In 30 minutes off the bench. While Brook Lopez can and has punished defenders down on the block, he primarily is out on the court to space the floor for Giannis. As a result, it was a perfect situation for Boucher. On the season, the Water Boy is a top 40 player despite averaging only 23.3 minutes per game. I still don’t think he will ever be a bonafide starter so I’d trade him in both redraft and dynasty since his value will likely never be higher. But only if you can get good value for him because I wouldn’t mind having him due to his per-minute acumen. Just realize that he won’t play much against centers that can punish down low.

What a G! Over the last four games, he’s been the number one player for fantasy. The free-throw shooting has been at 77% and the counting stats have all been orgasmic. The main reason has been the increase in playing time as he’s averaged 37.5 minutes per game, which is four minutes more than his season average. Play your best players as often as possible. What a novel concept! Budenholzer ain’t a dummy after all.

In 31 minutes off the bench. Look, I like Connaughton. He can shot and has crazy hops but it’s a problem when he’s the second-leading scorer on the night for the Bucks.

Not a career-high. Sad face. For you inquiring minds, Kanter has grabbed 26 boards multiple times before. Impressive.

18 shot attempts. A career-high! Just one of those nights, huh? Dort has attempted double-digit shots in six straight games and 16 in total. He’s scored at least 10 points in four straight. On the season, Dort is a top 200-ish player since the field goal percentage sucks and just contributes in tres, steals, and some boards.

Returned from a four-game absence and played 28 minutes. Prior to going down, he had played 36, 28, 33, and 30 minutes. He should continue getting plenty of run as the season progresses. The shooting efficiency and points will be an issue, but Maledon will provide dimes and steals.

In 24 minutes off the bench. With a Roby, you’re usually punting, but not with this one. Isaiah is a viable option for boards, field goal percentage, and defensive stats. There’s also the added benefit that he will get the occasional start when Al Horford rests and could become the starter if Horford is traded.

LeBron is LeFantastic. Since Dame gets the no words and picture treatment, I’m just going with this for LeBron blurbs in the future because we know what the numbers are going to be. LeAwesome.

Got the start for Anthony Davis and played 26 minutes. K. K. K. Three strikes and he’s out. Oh shit, some dudes in white masks have appeared outside my house with tiki torches. Is that a cross I see? Yo, that’s unnecessary guys. AD is out for a few weeks so Kuzma should see plenty of run. In seven games as a starter, Kuzma has averaged 30.7 minutes, 13.3 points, 1.9 tres, 6.6 boards, 0.9 dimes, and one block while shooting 49% from the field and 66% from the line. Like I kind of get it why big men have difficulty shooting free-throws. It still baffles me but I get it. I have no idea how a player can drain tres from downtown yet can’t hit free-throws. Why??!!!

With Davis off the court, Schroder sees a usage rate of 22.1, which is surprising since I thought he’d get a massive boost. Last night, though, he garnered a 33.7 usage rate. Why you play with my emotions, numbers? I’d imagine this will be the New World Order for as long as AD is out.

At first, I thought the Ant-Man nickname was stupid for Edwards. Like, I got it because ANThony but then I remembered…..

Alright, it works. Edwards is a beast and straight bullies defenders in the paint. The shot selection can be questionable at times, and he doesn’t contribute much in the defensive cats, but he sure as hell can score. With D’Angelo Russell out for four to six weeks after knee surgery, Ant-Man will be the number two option for the Timberwolves. He garnered a 31 usage rate last night.

Meow. Is Ant-Man number one? Tune in for the next Marvel blockbuster: Ant-Man vs. KAT.

Top 10 player over the last eight games. I’m a stupid, stupid man. It was so obvious to so many of you. I shall now flagellate myself like Silas in the Da Vinci Code.

In 14 minutes off the bench. Willy had overtaken Jaxson Hayes for the backup center minutes and averaged 19.1 minutes over the last eight games. He could be getting a lot more in the short term as Steven Adams exited last night’s game in the fourth quarter with a back injury. #FreeWilly.

In 32 minutes off the bench. The second time this season Hart has scored at least 20 points. Don’t expect points on the regular, though, as he’s scored single digits in 17 games. You can count on the boards, though, as he’s grabbed at least 10 in six games and is averaging 7.6 per game on the season. It’s too bad Hart couldn’t deliver on Valentine’s Day. It’s a capitalist manufactured holiday anyway.

Is Morant amazing? Ja. Does Morant rule? Ja. With that said, he’s outside the top 100 on the season. The tres and defensive stats are light. Ja will rise up and rule though someday.

Got the start and played 29 minutes because Paul Millsap was out due to a knee injury. JaMychal did not make anyone Green with envy for starting him. Quite the opposite. Green puke like a Fukushima survivor. Green is a points and boards player. With a 43% field goal percentage, which is often in the 30% range, MC Hammer be singing, “Can’t trust it.”

Got the start and played 40 minutes because Monte Morris was out with a shoulder injury. Campazzo is a passing wizard and can rack up dimes but the shooting efficiency is definitely a concern. He’s shooting 37% from the field. When everyone is healthy, he will return to playing 13 minutes a game.

Top 85 player on the season. More like Jamal Mehray.

I heard a new bagel shop opened up in downtown Denver. MPJ bagels. They sell donuts too. The reviews are in. They taste like shit. MPJ is not endearing himself to the coaching staff with the starting opportunities he’s received due to all the injuries. He will more than likely return to a microwave role when everyone gets healthy.

Got the start and played 28 minutes with Daniel Thies out of commission due to a finger injury. Once Theis Theis Baby returns, Thompson will go back to playing 20 minutes per game. In the meantime, if you need boards with literally nothing else, then TT is your man.

Led the Celtics in scoring, the 12th time this season. Granted, Jayson Tatum missed some games but stats fly forever. The percentages have regressed and the turnovers have increased over the last few games. As a result, he’s been outside the top 100. I wouldn’t trip too much, though, as he will get back to his top 50 ways.

In 20 minutes. A five-finger discount! Another career-high.

In 25 minutes off the bench. Money is Green and Green was money last night. He plays the small-ball center position well for this squad. Defense? What’s that?

When everyone is healthy, Harris has a usage rate in the teens and has single-digit shot attempts often. When one of the Big Three sits, or two as was the case last night, the usage rate spikes up to the mid-20s.

Like a good neighbor, Chris Paul was there last night. Unfortunately, it wasn’t enough as the Hardenets squeaked out a victory, 128-124. On the season, Paul is a top 25 player and has been top 15 over the last four games.

I hate myself Ayton for drafting him in a league. That’s now three straight games he’s had single-digit shot attempts and the 11th time it’s happened on the season.