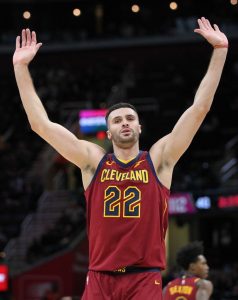 Last. A truly underrated word that gets a bad rap. We often associate the word with the sad events of life: that last kiss, last breath, last meal, last dollar, last call, last game, last day….sniff, sniff. I’m sad. But fret not, because one word can represent emotions at opposite ends of the spectrum. What do you think of when you read last man standing? Or last team left? Last = winner in that context. How about when the last shot goes in for the last score to leave the last team victorious? That’s exactly what Larry Nance Jr. did last night:

Got the start, played 33 minutes, and tipped in the last shot to bring victory to Cleveland. Duh!! Play the man, especially at center, where he beasts. You did pay the man with a four-year, $45 million contract after all. Not talking to you, my much appreciated reader. Cleveland! Do you hear me??!!! I know you like Ante Zizic, but c’mon man! Over the past eight games, Nance has averaged 29.6 minutes, 11.3 points, 0.8 threeecolas, 8.8 boards, 4.5 dimes, 1.8 steals, and 0.9 blocks. He’s shot 58% from the field and 75% from the free throw line. He’s been a top 20 player! Wake up Cleveland! Or you will literally be the last team, but maybe that’s what they want in order to draft LeBron 2.0.

Led the Cavs in scoring. It’s always dangerous venturing into the Hood, but sometimes it’s a place to go if you need a certain thing or things. In this case, threeecolas and points. Over the past four games, Hood has been a top 60 player, as he’s averaged 18 points, 2 threeecolas, and even chipped in 4 boards, 2.3 dimes, and 0.8 steals. He’s been shooting 53%, which is going to come down, but he’s getting minutes and jacking up shots (12.3).

Got the start because Jordan Clarkson was out (back), but only played 14 minutes. I’ve always liked Nwaba since his Lakers days, as he plays hard and contributes in the peripheral cats, but he’s a low usage player on offense and often struggles to score.

Played 23 minutes. Five games ago against Milwaukee, Blossomgame….what an awesome name by the way. Jaron, do you have game? I don’t just got game. I got Blossomgame. Panties are immediately down at the ankles. Oh, we’re not talking about that kind of game? Anyways, before I was rudely interrupted, Blossomgame scored 11 points and grabbed 10 rebounds against the Bucks. Then, the following three games, he received 11, 11, and 9 minutes. The six attempts were a season-high, so he’s not an offensive force, but he does work on the glass and contributes the D. See, there’s reason for the panties to be off.

Over the past seven games, Young has been a top 25 player. He was drafted for the D stats, but he’s been dishing out over 3 dimes, grabbing 9 boards, scoring 18 points, and even shooting 71% from the free throw line. That’s how you know this is Bizarro Young.

No pain, no gain right? Well, that 500 Myles sure was painful, but it was well worth it.

Ictor missed two free throws at the end of the game, which would have put the Pacers up by three points. See what’s missing from his name?

Played 24 minutes. He’s come down from the ridiculous heights he was soaring at earlier in the season, yet he’s still a top 100 player.

Got the start and played 38 minutes in his Wizards debut. Kind of crazy, but over the past five games, he’s been a top 15 player. This TA may be enough of a distraction from the controversial topic of Wall.

Only played 26 minutes due to foul trouble. What an atrocious game, after he’d been dominating. Now, whispers of “maybe we don’t need a Wall” are echoing throughout the streets of DC.

Got the start but only played 25 minutes. Phil is not a happy camper, as he will no longer be the top Collins on a Google search.

Played 27 minutes. Has been a top 50 player over the past six games. Points, rebounds, threeecolas, and D stats are what you get. Definitely not a Dedmon.

Played a team-high 35 minutes. Has been a top 100 player over the past few weeks and is now averaging over 32 minutes per game.

I believe in Trae and, if he doesn’t finish off the season on a serious heater, he could be a nice value for next year. More than likely, though, he’s going to continue improving, finish the season strong, and get overdrafted. We shall see.

Played 21 minutes, the first time surpassing 20 minutes all month. No! But….No! He played 8 minutes the prior game. No means no!

Played 24 minutes. He had played 13 and 17 minutes the prior two games. What don’t you understand? No means no! I miss Linsanity. That may have been the most insane two week period of basketball in forever ever.

When I find that DeLorean on Craigslist, the first place I’m going back to is 2015. I’m bringing some Tony Robbins tapes and giving them to Barnes before that playoff run. I just want to see how things would be if Barnes balls out during that playoffs, the Warriors re-sign him, and Kevin Durant goes somewhere else.

I’m telling y’all. Those triple-dubs are going to start flowing like manna from the heavens.

That free throw percentage is starting to come back down to reality, as he’s shot 58% on 4.3 attempts per game over the past four games. That 73% mark you see for the season? Kayser Soze.

Played 21 minutes. The assists have come down from the lofty levels from earlier in the season, but at least he’s still contributing a handful. Outside of threeecolas, points, and assists, JJ doesn’t offer much.

Continues to start and played 34 minutes. Boards, blocks, and some dimes are what you get.

Top 50 player over the past two weeks. Murray is averaging a whopping 36 minutes and jacking up 16 shots per game. He’s also grabbing 5 boards, dishing out 6 dimes, stealing 1.3, blocking 0.6, and contributing 1 threeecola per. As Borat would say, “Very nice!”

Played 25 minutes. Over the past seven games, it’s been full Monte, as he’s averaged 27.5 minutes, 13.9 points, 2.1 threeecolas, 3.4 boards, 4.6 dimes, and 1.7 steals. AND he’s sporting a ridonkulous assist-to-turnover ratio of 6.21, which leads the league by a significant margin. If that doesn’t get your panties in a bunch, how about the fact that he’s been the #33 player over that span?

Played a team-high 43 minutes. I love what Kuzma has been doing, especially in the peripheral cats. With that said, much of increase in both production and minutes has been due to the Brandon Ingram injury. When he comes back, I can see both coming back down. Over the past eight games, Kuzma has been a top 30 player. I can see him reverting back to top 75 player.

Got the start because JaVale McGee was out (illness), but only played 17 minutes.

Ball-in, Ball-in, Ball-in. The only question I have is, “How much was the hush money for LaVar?” Or did Magic just put his arm around him, squeeze him a little too tightly, and whisper, “Listen here young fella. This is how it’s going down, got it?”

Played 38 minutes. Not your average f’ing Joe at all.

Here we go…..Monday. Tuesday. Wednesday. Thursday. We over the hump. Friday. Saturday. Picking up steam. Sunday. Rondae!!! Top 120 player over the past two weeks. He’s finally averaging over 29 minutes per game. If you need points, rebounds, and steals, wait till Rondae.

Played 34 minutes. I’m in Brooklyn right now, staying at my in-laws. I just did a pod with Craig yesterday, and I had some disparaging things to say about Russell. So, of course he balls out. Did you know the Nets have won six games in a row? By the way, go check out Craig’s pod. Should be up later this week.

Played 24 minutes while Jarrett Allen played 20 minutes. Atkinson continues going to Jared. And why not, as he had some big buckets in crunch time. What a time to be alive when Jared Dudley is making key contributions in an NBA game.

Played 34 minutes. Top 100 player. Won’t contribute much in the D stats, but provides a healthy amount of points, threeecolas, and assists. Has a 24 usage rate on the season, which has ticked up to 28 over the past two weeks.