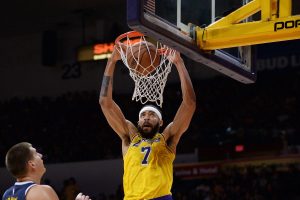 I live in Los Angeles and enjoy skiing and snowboarding. I also like long walks on the beach while strumming tunes on my ukulele. Although there are ski resorts less than two hours drive away, it doesn’t rain often here. Los Angeles averages around 12.8 inches of rain per year. Last year, LA received 4 inches of rain. Only Las Vegas, Phoenix, and San Diego average less. For perspective, New Orleans averages 62.7 inches, while many of the big cities in the U. S. are in the 40-50 range. If it doesn’t rain often, then it doesn’t snow often, which means the slopes are no bueno, even with the artificial snow makers. Now, recently it’s been raining so much that I’ve been Googling ark blueprints. All that rain has been like frozen manna for the local resorts. A picturesque perfection of powder. Which describes the situation for JaVale McGee.

McGee has started the last two games because Ivica Zubac was traded to the Clippers. He’s played 26 and 30 minutes, and averaged 19 points, 10.5 boards, 1 block, and 0.5 steals. Per 36, he’s averaging 18.3 points, 11.2 boards, 1 steal, and 3.4 blocks! He’s probably not going to get 36 minutes of run per night, but with only Tyson Chandler, Moritz Wagner, and Mike Muscala the only threats to playing time, McGee should get close to 30 minutes per night. The conditions are pristine at McGee Mountain. Enjoy your stay.

Lakers got spanked, 120-143 in Philadelphia, so take all the below numbers with a sprinkle of salt.

How different are LeBron and Westbrook right now? Both average a trip-dub, but both turn the ball over at a high rate and shoot poorly from the free throw line. 53% on 3.8 attempts over the past four games for LeBron. Recently, both have been top 60-70 players.

Got the start and played 31 minutes, as Rajon Rondo came off the bench and played 16 minutes. Bullock provides shooting for the Lakers and unleashes point LeBron.

Stories of his demise have been greatly exaggerated. The usage rate has increased from 21 to 24 since arriving in Philly. Now, it’s only been two games, so could be just honeymoon period or small sample size. Regardless, it’s a good sign that he’s been able to assimilate so smoothly. My initial thought is that the fantasy outlook is capped for Harris, but you never know. Something to monitor.

Gave thanks to the Lord for the Lakers playing McGee so many minutes.

Over the past four games, Redick has been a top 35 player, providing points, tres, dimes, and some steals.

The boards have been light lately, but the shooting efficiency has been off the charts. Top 50 player who will contribute in all but tres.

Dame Dolla produces fire both on and off the court. Just outside the top 10 for the season.

Just a few weeks ago, I was writhing in anticipation for the flood of trip-dubs. Now? I’m disappointed when it doesn’t happen. Life came at me fast. From a fantasy perspective, the lack of D stats and poor efficiency keep him down (top 140 over the past five games), but he provides the counting stats and heart palpitations.

Played 32 minutes. I’m a sucker for the Hardaway bets on the table. They aren’t great bets but at least they are not one roll bets like some of the others. With that said, it feels so good when they hit. Hardaway is going to shoot, because shooters shoot. The efficiency isn’t great and he won’t contribute much on D, but the volume is there and he plays next to Luka.

The center minutes are being split evenly. Maxi Kleber (9 points/4 boards/1 steal) got the start and played 26 minutes, while Dwight Powell (13 points/8 boards/2 dimes) played 27 minutes off the bench. They do both play some power forward as well.

Continues to start and played 35 minutes. The floor is so high because he contributes across the board, but there is access to ceiling games when he knocks down shots. Top 50 player over the past six games.

Got the start and played 32 minutes. A rise in value for this Johnson, as he should be the starter going forward. For Johnson owners, consult a doctor if erection lasts longer than four hours.

Played 35 minutes in his return from a two-game absence. Over the past four games played, Booker has been top 20. The uptick in boards and dimes have been a boon, and he’s always a threat to drop a 50-burger. It’s all about health with Booker.

Played 32 minutes off the bench.

Got the start and played 22 minutes.

I love playing Sid Meier’s Civilization. When I attack, I never use my most valuable units in the initial foray. I utilize expendable and/or less valuable pieces to soften the target up, then I finish them with my prized possessions.

Played 27 minutes off the bench. I love BogBog because he contributes across the board. Unfortunately, the Kings roster is littered with wing players now, with the acquisitions of Harrison Barnes and Alec Burks.

Got the start and played 30 minutes. The shooting efficiency isn’t good, and Barnes doesn’t contribute much on D, but he’s playing on a team that is #3 in offensive pace. Not that he accessed his ceiling much before, but he could be limited to 30 minutes per game.

The minutes and scoring have ticked down for earlier in the season, so he’s been more like a top 120 player instead of a top 70 one. Regardless, he rebounds well for a guard and provides dimes. Plus, the Kings are only one of two teams to play 12 games during the fantasy playoffs.

Top 20 player over the past seven games. It’s happened!!! Yeast takes time to rise, water doesn’t boil right away, and it took Jesus three days to rise again. So it is with hype.

Vucevic’s fantasy season has been akin to finding a stack of Playboy magazines in grandpa’s garage. You go into the garage to peruse one every day, and every day you exit satisfied.

I used to hit the clubs in my younger days. Some had a world famous deejay, but more often than not, the deejay was there to basically not F things up. Know the songs that get the crowd dancing and transition from song to song smoothly. That’s Augustin in a nutshell. Top 100 player over the past two weeks.

After a brutal stretch for Fournier, it looks like he’s stabilized. He probably won’t produce the top 60 value from last season, but he will provide points, tres, boards, dimes, and steals.

Top 40 player over the past seven games. You either like Ross or you don’t. There’s no middle ground.

After being a dub-dub machine earlier in the season, he’s slowed down lately, as he hasn’t performed the feat in seven of the last 10 games. It doesn’t help that he’s been receiving almost 2 fewer minutes of run a game. Collins did lead the team in shot attempts, though.

Top 80 player over the past eight games. Points, tres, boards, dimes, and steals. The usage rate is only 15, but he’s been shooting 49% from the field. I’ve like Huerter since the summer but….

Man, the Hawks kind of suck for fantasy. They play at the fastest pace in the league, but the minutes pie is distributed among so many players, that it neuters any upside. No player received 30 minutes of run last night, yet eight played at least 20 minutes, and two played over 15 minutes.

Prior to last night, Winslow was absolutely brutal (like outside the top 300 brutal), as he was shooting 30% from the field. With that said, he does contribute tres, boards, and dimes, but won’t contribute much in the D cats.

My RichardSON!!!! Man, it’s been so long that I don’t know what to do with myself. I never lost faith, though.

Got the start and played a team-high 41 minutes. Second start in a row since Tyler Johnson was traded. The plane boss! The plane! Waiters Island is back, as he’s played 41 and 32 minutes the past two games.

Green is one of the most underrated/overrated/strangest players of all time. It’s so crazy the impact he has on the game without shooting. I think a new category needs to be established for him. There’s superstar, role player, and bench player. Just add Draymond right under superstar.

Stephen Curry scored 25 points while Klay Thompson scored 29 points. Is Klay a max player? He’s a great player who can shoot, but I feel like a max player should be one who I can throw the ball to in an ISO situation and they’d get a bucket. Is Klay that guy? Am I trippin?