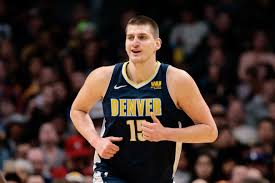 We are all attracted to different things. Some like the boobs, while others prefer the butt. Some like the wit, while others like to laugh. Whatever you’re into, what you consider fine and what blows your mind is totally subjective. Nikola Jokic had his detractors when he came into the league. He was too pudgy. Not athletic enough. Doesn’t play D. He didn’t look like a ball player. That was one perspective. But he shoots and passes. Man, can he pass.

He did that during last night’s game against the Clippers, but that’s not all he did.

Ho hum. Just Nikola messing around in back-to-back games and fifth time this season. I count another nine games in which he just missed as well. Such a Jokic! Anyways, he’s the #12 player on the season, but over the past eight games, he’s been #6. Jokic has averaged 33.8 minutes, 24.9 points, 1.3 threeecolas, 11.8 boards, 8.6 dimes, 1.4 steals, and 1.1 blocks. 55% shooting from the field and 83% from the line on 3.8 attempts puts the cherry on top. Nikola may not have the body of supreme baller, but the way he plays the game and the skill set he possesses makes me googly-eyed, while the plays he makes blow my mind.

LMA-ASGFSDHGADHDFHGSA’SERFTHASOHGIASOGIOSNV’A ;TA’VESHASFRA-O!!!!! There have been 12 games in the history of the NBA in which a player scored at least 50 points without making a threeecola. LMA posted the 13th game in NBA history last night. He coulda and shoulda been the lede, but the game ended too late.

That feeling when you walk out of the cold tub at the sauna and a tripod walks by.

Top 25 player over the past seven games. He’s not going to continue shooting 69% from the field, but the boards, dimes, and steals are legit.

A Marco. A Belinelli. A drain a threeecola.

Over the last six games, the usage rate has been 32.7! He’s literally been contributing in every category except blocks. Without a block in 10 games now. He been hanging out with _lake or something? I hear the regression fairies buzzing in the distance.

Sneakily putting up a top 85 season. Points, boards, and D stats are the bread and butter, but he’ll chip in some threeecoals from time to time.

Only played 38 minutes because of an ankle injury. While he did return to play in overtime, his status is up in the air.

He should be arrested for messing around so much. Outside the top 25 because of the high turnovers, poor free throw shooting, lack of blocks, and limited threeecolas. He’s shooting 23% from downtown!

Talk about staying in yo lane.

Only played 23 minutes, as the Celtics got blown out 115-99 and it was the back end of a back-to-back. The Celtics still haven’t ramped up Horford since returning from injury.

A low usage player, Smart derives much of his value from getting his 211 on and dishing out dimes. Over the past seven games, though, he’s been shooting 48% from the field and has drained 2 threeecolas per game. Top 100 player.

Got the start but only played 20 minutes. JJ is just not getting the minutes, especially in the fourth quarter, to be an asset. A commenter wrote a few weeks ago that, “JJ sucks.” Could be the most succinct and spot-on analysis of the year.

Delivering Justise from the point guard position, Winslow has been adequate filling in for Goran Dragic. The shooting percentages aren’t great (42% from the field and 64% from the line) and he doesn’t provide many blocks, but points, threeecolas, boards, dimes, and steals are produced.

Over the past seven games, the minutes have been split right down the middle at the center position. Whiteside has been a top 150 player, while Bam has been top 50. I’m just the messenger.

The shooting percentage sucks (41%) and the D stats have been lacking, but he’s still my RichardSON. Top 75-ish player who will provide points, threeecolas, boards, dimes, and hopefully the steals and blocks return soon. I miss you guys.

Played 29 minutes after DNP-CD the prior game. Shrug emoji.

Top 25 player. Dude is gonna get paid this offseason. Always bet on yourself. Unless you’re Nerlens Noel.

If you’re rostering Bradley, you may as well start prepping for baseball.

Led the Clippers in scoring while playing 25 minutes off the bench. Top 50 player over the past seven games. Sweet!

Murray is an offensive machine. Defensively, he’s offensive from a fantasy perspective. Regardless, top 100 player.

Got the start and played 30 minutes. Low usage player who will knock down some threeecolas, grab some boards, and get his 211 on. Don’t expect much else.

Got the start because Gary Harris was out (hamstring) and played 31 minutes. Harris should be back soon, so Beasley will go back to a bench role. Regardless, he’s been productive, providing a handful of threeecolas, boards, and dimes. Top 80 player over the past eight games.

Played 20 minutes off the bench, as the Nuggets blew out the Clippers by 21. Blowout run.

A disappointing game, considering _lake Griffin did not play. A top 100 player over the past seven games and top 50 on the season. A far cry from the top 20 production from last season and earlier this year.

Played 16 minutes off the bench. No _lake, Henry Ellenson, or Zaza Pachulia meant…..was supposed to be more minutes for Leuer, but womp, womp, womp.

Played 20 minutes off the bench. Nemanja Bjelica played 25 minutes and went 7/5/5. Bagley will likely get more minutes as the season progresses, which will negatively impact Bjelica. The Nemanja was good while it lasted.

Lol shrinkage from the cold tub! Eyes up people!
Keep up the good and funny work Son!

Trade thoughts? 12 team H2H.
I’m dead last cuz of my Love and Barton picks and prepping for consolation bracket, which decides the first half of next year’s draft. (Winner gets first pick, runner up second, etc.). I have keepers in Boogie who will cost me a 6th rd and Middleton who will cost me an 8th rd.

My KD + Bagley/filler for Butler and either Otto or Hield.

Ha! Thanks for reading!

Would rather have the KD side

Trade question on another top guy.

Whick pair would you rather have ROS in a yahoo H2H pro league?

A) Curry and Carroll

B) Beal and Mitchel

Another awesome week of reading material Son! Along with the Q&A’s you provide!

If you own Taj & Bamba are you swapping either or both with Holmes & Giles.

Pretty sure Taj and Bamba will both get picked up in this league if I drop them.

Hoping Bryant gets it going again after facing Adams/Embiid/Embiid in his last 3..

Missed out on the Huerter claim as I was 11th on waivers. Bummer

I’m good with swapping out Taj for either Holmes or Giles. I’m holding onto Bamba. I’m very intrigued by Giles. It may be nothing or it could be something. I’ve scooped him up to see.

I hear you on Bryant. May have just been a matchup thing. Hopefully the minutes increase for Mahinmi was just a blip. Kind of worrisome though. We shall see

Who would you rather have Spida Mitchell or CJ Macollum? in 9 catg leagues.

@Draco21: Ok. Is there a question or you here for the smile and a handshake?

Might trade ad for beal+jjj. Thinking of ads shutdown risk vs jjjs upside once memphis is out of playoffs

@Draco21: I’m all for exploring trading AD, as his playoff schedule is not appealing, but I’m not with you on shutdown risk. I could see the JJJ scenario, though, but they play at such a slow pace. With all that said, I’d want more for AD but you know your league better than me

Building off yesterday’s quastion, drop Fournier or Schroeder for Giles?

Could wait until the next game but both leagues are fortunately active and have shallow waiver wires. Thank you!

@miles proudfoot: Nit Fournier but I would for Schroderand Willy.

I’ve taken the bait on Giles. Just to see. Floor is super low though

@Son: thanks. I’m going to go for it. Also available are Huerter and Holmes.

@miles proudfoot: You know I’ve been a Huerter guy all along so…..

Good luck on Giles. If it doesn’t work out, it wasn’t me

@Son: haha thank you reggae icon Shaggy. I went with your boy Huerter!

Don’t get mad but I’m contemplating trading our RichardSON to bolster my roster for a great fantasy playoff schedule.

Any other targets with strong schedules you suggest are welcome as well. Thank you as always!

@Jasper: Ha! You are forgiven.

The Kings are a hard team to figure out with so many moving parts plus rumors of their adding another wing. How secure is BogBog’s playing time? I am trying to bolster my playoff schedule roster with four games per week players…..and am considering offering Tristan and Carter Jr. for Javale and BogBog. Thoughts with this roster?

I think his role is pretty secure. While he probably won’t start, he’ll be the main guy off the bench and should get around 28-30 minutes a night. I’m good with the trade.

what are your feeling towards Horford for Lavine. 9 catg 12 team league.

@Son: Im elite in FG,REB,POINTS,BLK, punting ft,not very good at assist and 3s. competitive in to and stls.

@Dave`: Yeah, I hear you. That’s why I’m not the biggest LaVine fan. Are you hurting for big men? What’s the rest of roster look like?

@Dave`: Ok, you’re stacked with big men but I’d look for someone other than LaVine. Outside of the FG% concerns, he only has 9 games during the playoffs

Could you please rank these players for rest of the season ?? H2H, 9cat
-RoCo, DMC, batum, sexton, nance jr, bembry

@Rick: Hmmm, tough because of the injuries. I have to discount for that so…..Batum, Bembry, Sexton, RoCo, Nance Jr., DMC.

My Westbrook and Capella for his Towns and J. Allen? It’s a big hit in assists, steals, and points, but a big benefit in field goal and free throw percentages. I’m doing fine in assists and steals, it’s the percentages that are tight. Is this close, or definitely the Westbrook side?

Does the Towns side win out if Brogdon is added, to make it Towns, J. Allen, and Brogdon?

Tilts when you add Brogdon

@Son: Thanks, and Westbrook and Capella tops just Towns and Brogdon too, right?