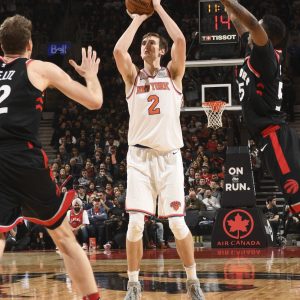 Luke Kornet played four years at Vanderbilt University, where he averaged 13.2 points, 6.2 rebounds, 1.2 assists, 0.5 steals, and 2 blocks on 47% shooting from the field and 32% from beyond the arc his senior year. No wonder he went undrafted in the 2017 NBA draft. But he’s the left-handed pitcher of basketball, in that he’s 7′ 1″, 250 pounds, and can shoot from outside. The New York Knicks took a chance and signed him to a two-way contract in 2017. Kornet spent most of his rookie year down in the G League, but still managed to play 20 games with the big club and exhibited the ability to shoot the threeecola and block shots. To begin this season, Kornet played a total of 12 minutes in the first 29 games, but Coach Fizdale inserted him into the lineup for game 30 against the Hornets and Kornet scored 13 points, grabbed 6 rebounds, blocked 3 shots, stole 2 passes, and shot 3-for-5 from downtown in 24 minutes. Although he continued to get playing time in the next five games, Kornet never received more than 14 minutes in any game. Then, last night happened.

Kornet received the start and played 34 minutes. The start may have been matchup based, as he would have more success defending Brook Lopez on the perimeter and the Bucks defensive philosophy allows teams to beat them from downtown (MIL is dead last in number of opponent three-pointers attempted per game). With that said, Coach Fizdale said that he wanted to change up the lineup to get more shooting on the floor so that Emmanuel Mudiay and Kevin Knox would have more space to operate. In addition, Kornet does protect the rim better than Enes Kanter, which isn’t saying much, but it is what it is. I never understood why the Knicks continued rolling out Kanter, especially since he’s an UFA after this season. Play the young kids and “Try for Zion.” Having a center rotation of Kornet and Mitchell Robinson would make the most sense, as it would be an offense/defense combination, but Coach Fizdale has shown that he will change up the rotation in a heartbeat. With that said, Kornet is worth a pick up, as the reward for threeecolas and blocks far outweighs the risk of…..free.

Boards, blocks, and threeecolas. God trusted Noah, but if you don’t have faith, I understand. You want cold hard numbers. Well, he’s a top 100 player on the season and has been a top 50 player over the past three games. Good enough for you?

Played 14 minutes off the bench, as he got ejected. Prior to the game, Kanter voiced his displeasure with getting demoted. As I mentioned in the lede, I don’t understand why the Knicks are playing Kanter. Fizdale has shown that he’s willing to do anything, so it’s a tough situation to read, but the only ways I see Kanter regaining the starting role back is if injury strikes or the team wants to try and showcase Kanter for trade possibilities.

Played 29 minutes. If you have a minutes played category, then Dotson is a great pickup.

Imagine if the 300 at Thermopylae had the Antetokoumpo clan in the phalanx. They would have sent those hundreds of thousands of Persians back to Asia where they came from.

Played 21 minutes. Wilson has been getting run because Ersan Ilyasova has been out. Not sure how things will shake out when he returns, but Wilson may have carved out a little niche with his play. Threeecolas, rebounds, and blocks are what he provides.

He’s so freaking good. The handles. The shot. The moves. The ease and grace with which he navigates his way to the rack. Kyrie is the #7 player for fantasy on the year. Take that all you round-Earthers.

Over the past five games, Morris has been a top 35 player. On the year, he’s top 70. Don’t expect many D stats, but the points, rebounds, and threeecolas should be there.

It’s not rocket science people! When Chris Paul is off the court, Harden has a 45.6 usage rate!!!

He’s a 3 without the D player, but it’s nice to see him contributing in something other than threeecolas.

Played 33 minutes. Since arriving in Houston, Rivers has played 33 and 31 minutes and scored 10 points in each contest. I think he sucks, but he’s getting minutes and is the primary creator on the second unit. There’s some value in that.

Played 40 minutes. Kuuuuuuuuuuuuuuuuuuuuuuuuuuuuuuuuuuuuz. With LeBron James off the court, Kuzma has a 28.7 usage rate, an increase of 4.8. His growth as a basketball player has been tremendous (can ISO at the top of the key and take defenders off the dribble, perform Harden-esque step back threeecolas, and bully smaller defenders down low), but from a fantasy perspective, the lack of D stats keep him in the top 100 range.

With LeBron off the court, Ingram has a 31.3 usage rate, an increase of 7.3. He is no longer 1A. He’s number 1! He’s number 1! The J still needs work and he needs to get stronger at the rack, but the skill he possesses is mouth-watering at times. He can inside-out dribble, then bring the ball back between the legs….stop….then rise up for a mid-range J. So sweet. With that said, he can make you want to pull out all your hair as well. He gets stripped a lot because he’s so long and the dribble is so high, and that free throw shooting! He missed one with four seconds left, which would have put the Lakers up by 3. Instead, Bogdanovic came down a drilled a game-winning threeecola.

Got the start, but only played 20 minutes. He may not play as much in uptempo games or when Luke wants more perimeter defense from the center position. With that said, Zubac has shown enough to warrant continued playing time. We shall see what Luke decides to do, especially when everyone gets healthy.

Played 21 minutes. Could neuter Zubac. Or could not. Last night seemed to be a matchup thing, but we will find out as more games are played.

Told y’all grasshoppers to be patient. Lonzo has this ceiling and ability. It’s just a matter of doing it on a consistent basis.

Continues to start and played 28 minutes. That will probably change when Marvin Bagley III returns, but until that time, enjoy this potent strain of Nemanja.

Playing uptempo suits WCS, as it accentuates his athleticism. How much of uncle Ben’s money is he going to get in the offseason?

Played 30 minutes off the bench. I love BogBog. Not just because he’s got big balls (drilled the game-winning threeecola). He’s tough as nails and can contribute across the board for fantasy. Won’t win a league, as he’s a top 125 player, but he provides a little something something everywhere.

Played 27 minutes. He sucks. I don’t get why he keeps getting run.

It was a good day in the Simmons household. Top 50 player for fantasy. Imagine if/when he learns how to shoot. Oh Lordy. I believe the line to sex him will be longer than Embiid’s.

Hmmmmph. No blocks but 87% from the free throw line? What kind of shammockery is this?

It’s all about the shooting efficiency for Mitchell. Over the past six games, he was shooting 32% from the field. The peripheral categories are the same, if not better in some, compared to last season. Have no fear Mitchell owners. The usage rate is over 30 and the shooting percentage will improve.

Dante’s Inferno!!! Played 21 minutes, but he’s only been averaging around 17 minutes per game over the past couple of weeks. The 20 points were a season-high, so this was likely an outlier game. I just don’t see him getting the minutes to be fantasy relevant. With that said, someone to keep an eye on.

When you literally need just threeecolas and nothing else.

Plays a shit ton of minutes and provides boards, threeecolas, and steals. Not everyone can be LeBron James.

No threeecolas and the free throw shooting is terrible, but Nurkic provides points, rebounds, assists, steals, and blocks. Top 75-100 player. I have to put a range because he’s so inconsistent.

Played 39 minutes. So cute that he and Lillard were bosom buddies.

Moe always has a place in my heart because I always used to draft him in 2K. Don’t clown. He’s tall, athletic, can play multiple positions, and shoots the ball well. At least in the videogame. For fantasy, he’s kind of a dud, although he will have some productive games from time to time.

There we go Draymond. The peripheral stats will always be there. He just needs to get that swag back to shoot. With that said….

I’m at a loss for words.

It was also a good day for KD. Needed OT, though. Put an asterisk next to another thing for KD.

It’s going to be good times when the Warriors win the title again and we all have to ask, “Wasn’t all the losing and drama they were experiencing early in the season so cute?” I’m honestly beginning to think that we’re getting played.