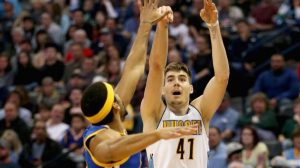 Juan is twenty THREE years old. This is year THREE in the NBA for Juan. Entering last night’s game, Juan had made an average of two point THREE shots and one point THREE THREE-pointers. Juan had attempted THREE minus zero point one THREE-pointers. Last night was start number THREE for Juan. Well, Juan is the lede so he must have done something good.

THREE more points and Juan would have set a new career-high! Before I get internet tomatoes thrown at my internet head, I focus on THREE because the boy can shoot from beyond the arc. He’s a career 38% shooter from downtown, but that mark should be higher because it’s tainted by a 28% mark in a 25 game sample last season. Juan is starting, getting minutes, and should continue providing THREEs and rebounds. When Will Barton returns, Juan will likely return to the bench, but that won’t be for at least a couple more weeks. Ready? Juan, two, THREEE!!!

Well, at least Green got….

Only played 30 minutes due to the blowout. 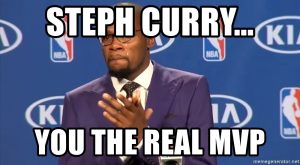 Got the surprise start over Quinn Cook and played 23 minutes. Stop rubbernecking. Nothing to see here, as Kerr wanted to counter the switching-based offense of the Rockets.

Played 33 minutes after playing 34 the prior game. Ennis Hands is the prototypical 3 & D player.

Nothing to get Harden excited about, unless you get a cookie for having the worst field goal percentage.

Played 28 minutes. No Melo means more minutes for Clark. His offensive game primarily consists of corner threeecolas, but he grabs rebounds and contributes the D.

The Hawks got pasted, 93-138. Usually, that’s a NO BLURBS FOR YOU!!!, but that could be a regular occurence for the Hawks so it’s something we need to delve into.

Had two rough games coming into last night, but Spellman bounced back in a big way. The 15 shot attempts and three steals were season-highs. In addition, that was the third game he grabbed 10 boards. It will be interesting to see how the Hawks handle the return of John Collins to the rotation. Will he adversely affect Spellman or Alex Len?

Got the start because Taurean Prince could not play and received 16 minutes. I love the physical tools and effort, but he’s still inconsistent on the offensive end.

Was questionable to play due to an ankle injury, but received the start and only played 13 minutes. As mentioned in the Spellman blurb, who does Collins affect the most?

No uno, dos, Trae last night. It was all about the Juan, two, THREE. In the past two games, Trae has shot 2-for-11 and 2-for-12 from the field for 6 and 4 points respectively. Prior to that, he had scored in double figures 13 straight games. I still believe. He’s still Young.

…Linsane! Lin has been averaging around 20 minutes per game with upside for blowout run, which the Hawks should provide plenty of. He can still score and provide assists, and steals.

The minutes have been all over the place for the Red Mamba, but he has received at least 28 minutes four times in the past six games he’s played. Not a stat sheet stuffer, Red Mamba will grab some boards and get his 211 on. I’d imagine the depth chart clears up down the road to get him in the lineup on a consistent basis.

Small sample size alert, but over the past four games, Millsap has been the 35th player according to Basketball Monster.

The Hawks are a Jokic.

That pass, though! A freaking Jokic!

Got the start and played 29 minutes. The start was because Jamal Murray violated a team rule, so nothing to see here on that front. What we do need to focus on is that Morris has been playing close to 28 minutes per game over the past week or so and has played minutes alongside Murray, rather than just being his backup. He’s been averaging 11.8 points, 3.3 boards, 5 dimes, and 1.3 threeecolas over the past four games. What has most endeared him to Coach Malone is the 8.0 assist-to-turnover ratio, which is #1 in the NBA by a signficant margin.

It was also a uno, dos, Trey day. Just not a uno, dos, Trae one. Lyles played 27 minutes, mostly due to blowout. I’m a fan of Trey, as he can contribute points, boards, dimes, steals, and of course Treys. He just doesn’t get enough minutes per game.

Played 23 minutes. As referenced above, Murray did not start due to a team violation, but should return to the starting lineup for the next game.

I played ball in Chinatown last night (not really) and everyone kept saying, “Derrick is not White. He’s wrong.” Or were they saying Wong?

Played 41 minutes. He had been in a little slump, but DeRozan is still the 17th player according to BM.

Played 25 minutes. He has been dealing with a heel issue, which sucks, because he was balling the F out to start the season.

Played 33 minutes. When Derrick is wrong, then Pop calls upon the General. The Chinese guys I was playing basketball with (not really) asked if that was General Tso.

A rooster crows to signify the beginning of the day. This Rooster will crow when he’s writhing in pain from an injury. I prefer to hear the first rooster.

Pssst, what date does the office pool have?

Played a team-high 39 minutes. Is the Logo going to back up the Brinks truck for Tobias?

He’s a rookie. There will be ups and downs.