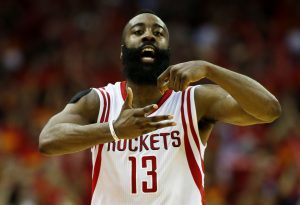 When I first started writing these recaps, Grey imparted into my tiny brain the wisdom of not writing about the same player in the lede. It wasn’t a hard and fast rule, but it made sense and I’ve tried to adhere to it as much as possible. But, but, but….Yes, I’m studdering mother [email protected]#!er. Sometimes a player is so good, so brilliant, so dominant that he moon walks over all the competition and I’m forced to do it. Let’s call it the James Harden fast rule.

That’s four straight games with at least 40 points. According to Jonathan Feigen (@Jonathan_Feigen), Harden joined Michael Jordan and Kobe Bryant as the only players over the last 30 years to score 400 points in 10 games. According to Kevin O’Connor (@KevinOConnorNBA), Harden was the first person in NBA history to score at least 40 points on eight field goal makes. He now has four trip-dubs on the season and 39 for his career. He’s been the #1 player for fantasy over the past seven games. All that is nice and dandy, but do you know what the craziest stat is? With both Chris Paul and Eric Gordon off the court, Harden has a 51.8 usage rate, an increase of 10.3%!!! The Harden Fast Rule is that when Paul and Gordon are off the court, James is gonna eat.

Before I begin, I just wanted to wish everyone a…..

Not so doo doo last night. In fact, over the past four games, Brown has been a top 125 player. That might not seem like a big deal, but he was languishing in the 200 area for much of the season. He won’t dish out too many dimes, but he will provide a little something something in the rest of the categories. His main issue is the shooting efficiency. Over the past week, Brown has been blistering hot shooting 59% from the field. That’s obviously not going to continue, but any improvement on the 43% level should be considered a win.

Has been a top 35 player over the past five games. If you want a big man that can score, rebound, and drain threeecolas, then Morris is your man. Just don’t expect much in the D departments.

Just wait until he has a usage rate over 22. He’ll be an A-lister like his cousin Channing. Currently at 0.7 blocks on the season, Tatum does have an outside shot to be the newest member of the 1/1/1 club.

Played 29 minutes, but missed some time due to getting poked in the eye. I think Patty Mills did the poking, “You really think the world is flat, Kyrie? Poke. How about now? How’s the world look now? Poke poke.” Injury doesn’t sound serious, but if he misses time, fire up those Terry Rozier shares.

O, LMA! What a performance. And he started off shooting 0-for-6! Over the last seven games, he’s been a top 20 player with a usage rate near 30. No laughing matter.

Got the start with Rudy Gay sitting and played 20 minutes. JP stands for just playing, which interestingly enough has multiple meanings. On one hand, Poeltl is literally playing. On the other hand, pick him up. Just playing.

It’s been a roller coaster ride for White owners. He was the Messiah when Dejounte Murray went down for the year. Then he was the guardian of Hades when he actually played. Now, he is General Patton leading his armored cavalry across the plains of Europe. Will White also bring back victory? Well….over the past four games, he’s been the #16 player.

Top 75 player over the past seven games. 3 assists with 3 rebounds with a shade under 3 threeecolas. 3’s are wild! Jackpot! Ding ding ding ding. I love that sound walking through the casino, but be strong like Odysseus sailing by the Sirens, as slots have the worst odds in the casino. Forbes on the other hand? He’s money….of course.

Played 31 minutes off the bench. Saw the biggest boost from the Gay injury. Bertans will provide threeecolas and rebounds.

Over the past eight games, Barnes has been a top 40 player. He’s always going to play a shit ton of minutes and no need to sweat the possibility of an assist, but the increase in threeecolas has been quite dramatic. Over the past four years, he’s never averaged more than 1.5 per game. This season, he’s near 3 per game. HalleLuka!

Played 24 minutes as he fouled out. This is why Steven Adams is escorting me when I travel back to the time of the dinosaurs, and the reason why he is the point man in the welcoming party when the aliens come.

David and his stupid slingshot would’ve had no chance against Adams.

Just Russ messing around again. Over the past seven games, he’s averaging a trip-dub with 3.4 steals per game! Insanity. Yet, he’s only been the #48 player because of the 5.3 turnovers and 62% free throw shooting.

Over the last four games, KAT has been the #2 player. ME-f’ing-OW! It’s helped that Jeff Teague and Derrick Rose have not played due to injury, as he’s had a 31.2 usage rate in that scenario, an increase of 4%.

Got another start in place of Jeff Teague and played 38 minutes. Over the last four games, he’s been a top 20 player. He’s a relatively low usage player, but the assists and steals give him a super-high floor. When he shoots, ceiling outcomes are accessed.

The big news for New Orleans was the last scratch of Anthony Davis from the lineup about one minute before lock. Good times.

When Davis and Nikola Mirotic are off the court, Randle has a 33.9 usage rate, an increase of 6 percent. Over the past four games, he’s been a top 60 player. The increase in threeecolas is a nice addition to his game. Now, he needs to up the production in the defensive categories in order to crack the top 50.

Returned from injury and played 24 minutes. If you need assists, steals, and some boards, sure. He was clocking in around the top 200 when he did play. 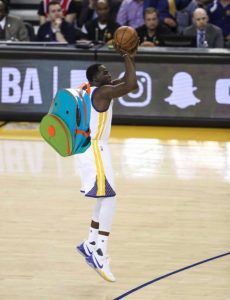 Yo, KD. Why you gotta do your boy like that with the whole backpack thing? That ain’t right.

Top 35 player on the season, as Warren has been a G by contributing in every category, with the biggest boost coming in threeecolas.

Top 5 player over the past seven games. Wait until he learns how to pass and shoot threeecolas!!! I have a feeling that those aspects of his game will come sooner rather than later.

Played 39 minutes. I’ve slowly come around on Mr. Anderson. How could I not? As he’s been a top 25 player over the past six games. He contributes across the board, but the one blemish is the free throw shooting. Someone needs to go into the matrix and fix that line of code.

The quietest top 20 season ever.

Played 20 minutes off the bench. Green is averaging around 21-22 minutes per game, but if you need rebounds, blocks, and some threeecolas from the big man position, then Green can be useful. He’s been a top 135 player over the past six games.

Played 25 minutes and was the main beneficiary of the Gordon injury. Gerald has the Green light from downtown anytime.

Led the team in scoring. Ha! Man, I remember when I used to call him Commissioner Gordon. Those were good times. Now? Not so much.

Only played 23 minutes due to injury (left calf). He got kneed so it doesn’t sound serious, but something to monitor.

Played 18 minutes. Not getting enough minutes to be fantasy relevant, but could get some more run if Vucevic is out for any amount of period. Boards and Blocks for Bamba.

Batum is the beached whale of fantasy basketball. “Throw him back in!”

Played 24 minutes but left the early after breaking his right hand. Free Willy?

Played 14 minutes and should be the guy at center for the Hornets. My emotions are a mess right now, as we’ve been here before.

Phil who? John is a freaking beast…at least on the offensive side of the ball. Needs to contribute the D, but he’s still a top 70 player without it.

Continues to start and played 25 minutes. As long as Dewayne Dedmon is out, Len will get his run.

Played a team-high 40 minutes. Baby, don’t Huerter. This song keeps playing in my head when I think about Huerter.

He’s a top 200 player for fantasy right now, but I think he only gets better as the season progresses. The main bugaboo has been the shooting efficiency.

Only played 23 minutes. Because he’s a boss. Top 10 player over the past seven games.

The D stats and shooting efficiency are down from his top 10 number last season, but he’ll get better, especially since he missed 11 games. With that said, it’ll probably be tough for him to replicate the top 10 performance.