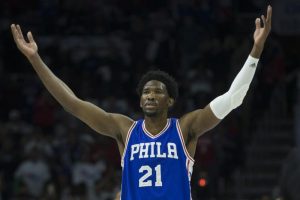 According to our good friends at Wikipedia, the word leprechaun is thought to come from “the Old Irish luchorpan, a compound of the roots lu (small) and corp (body). Looks at depth chart for the Boston Celtics. Nods head. Looks at mascot for the Boston Celtics. Nods head. The glove fits. Looks at OJ nodding his head vociferously from side to side. So, this iteration of the Celtics is perfect for the new-age positionless basketball, but it’s one that makes Celtics old timers cringe. Bill Walton. Dave Cowens. Robert Parish. Bill Russell. All big men that brought the pot of gold to Boston. Now, the 2017 Celtics are 34-12, the second-best record in all of basketball. Brad Stevens for President! But, a huge glaring weakness is facing off against dominant big men. Over the past two weeks, Anthony Davis went 45/16. Karl-Anthony Towns went 25/23. Even Tristan Thompson went 10/11. Tristan Thompson people! Which brings me to Joel Embiid. Last night, Embiid went:

He was a true Sixer: 6 free throws made. 6 assists. 16 boards. 26 points. Nods head vociferously like OJ. Ok, back to reality. You don’t need me to tell you that Embiid is awesome. What would be of interest, though, is that the 76ers may allow Embiid to play in back-to-back games. He’s a top 25 player for fantasy right now. If he starts getting full run, that might get OJ to nod his head vociferously up and down.

Lord Covington has been bad the past few weeks. He’s not hoisting up shots or getting his 211 on. The turnovers have also been plentiful, which would be good if he were a pastry chef. His last four games: 5, 11, 5, and 11 points. Next game 11 points? Anyways, I’m not too worried about the Lord. He has an extensive track record. Plus, one must always have faith in the Lord, right?

He did have 2 offensive rebounds and 5 defensive rebounds. I thought Ben was a Sixer? Looks like Embiid took them all last night. Simmons is really good. I do worry about his lack of J and aggressiveness at times. With that said, he’s going to score, grabs boards, dish out dimes, and get his block and 211 on. The lack of 3s and turnovers keep his fantasy value down, though.

He’s been a favorite of all the Razzball writers this week. And for good reason. That hair is impeccable. I kid. He’s scored in double figues three straight games and 211’d three in three straight games. It’s always the innocent looking ones you have to keep your eye on.

With no Kyrie Irving, Marcus Smart got the start at point guard and played 34 minutes.

Oh, Marcus darling. Only the seventh time he’s shot better than 50% from the field. He’s at 34% for the season.

Since returning from injury, Morris is now consistently getting around 25 minutes of run per game. He’s also hoisted up 9, 13, 13, and 8 shots in the last four games. Morris won’t contribute much in D stats, but he will grab some boards, drain some 3s, and get buckets.

The Commissioner isn’t focused on D. Isn’t it his duty to protect and serve? For Gordon, the best defense is a good offense, as he’s averaging close to 20 shots per game. Unfortunately, he’s been converting at a 35% rate. It’s only a matter of time before he gets hot again.

Since the start of the year, Simmons has scored single digits in four of seven games. At least he’s played 35, 32, and 33 minutes the past three. With that said, he’s so scoring dependent and doesn’t contribute much in the periphery categories.

Always has the potential to mess around, but as my momma used to tell me….potential don’t mean shit. There are so many annoying things with Elfrid. Obviously, his hair, but the free throw shooting. 63%? Seriously? Also, Vogel will sit Elf in favor of DJ Augustin at times. Aiya. Not even a top 100 player for fantasy right now.

Still crazy to think that Hezonja was the fifth overall pick in the 2015 NBA Draft. Mario needs some magic mushrooms. The minutes are all over the place, but when Mario plays he chucks, especially from downtown. He’s averaging 10 shot attempts per game from the field and almost five from downtown since the start of the year (8 games). Has scored double figures in six of the eight games and averaged five boards during that span. Not too shabby, but nothing super.

Since Isaiah Thomas has started playing, Love has had three games with a usage rate below 20%. Prior to IT playing, the usage rate was consistently in the high-20s to low-30s. While Love will still get around 10 shots a game, he probably won’t be getting the 15-20 he was getting pre-IT. Because he doesn’t contribute much in the D stats, it’s going to be difficult for Love to remain a top 25 player for fantasy.

2-for-8 from the charity stripe. LeBrick. I kind of feel like LeBron is playing LePossum right now. Letting IT get into the mix and coast until LeAll-Star break. Get LeCharged up. Then, unleash LeJuggernaught for the stretch run.

Played 30 minutes, which makes back-to-back games with at least 30 minutes of run. The usage rate has been in the 30% range since he’s returned. I didn’t think IT would make an impact this year, but it looks like he’s going to be a vital contributer going forward, unlike most of the IT guys I’ve worked with. Did you turn the power on then off? I kid. The IT guys were always very helpful. So was the Stocktonator, as it liked IT last night.

Played 13 minutes in his return. I love how the Cavs just completely punted defense. Anyways, I have a hard time envisioning Rose carving out a substantial role for the Cavs.

39 double-dubs in 47 games. KAT literally does it all. Scores, rebounds, assists, steals, blocks, shoots 3s, and converts at a high percentage from everywhere on the court. When I say literally, I mean literally because he’s played in all 210 of a possible 210 games in his 2 1/2 year career. Anthony Davis is like, “Why everybody gotta be looking at me?” You know who was all over KAT last night? Stocktonator, that’s who.

Most butlers hate cats, but this Butler is thoroughly enjoy his KAT.

Shit happens. There will be the occassional dud from Teague, but more often than not, you know exactly what you’re going to get.

With Trevor Ariza out, Luc Mbah a Moute got the start and played 32 minutes.

Ariza is out for another game, so Luc will be a viable streaming option against the Warriors.

Returned from injury and played 26 minutes. Was rusty but at least his owners are once again Harden excited.

With both Ariza and Gerald Green suspended, Tucker sucked up most of the minutes. He’s not a scoring threat, but will grab boards and get his 211 on. He’s going to get a minutes boost for another game, so he’s also a viable streaming option.

With Harden back, Gordon slides back to the second unit, where he feasted and will continue to feast. Nom nom nom.

Played 37 minutes after getting 36 minutes of run the game before. The 14 boards were a season-high, as he tallied his second double dub of the year. Young has scored double figures in six straight games.

With Myles Turner still out, Domantas Sabonis got the start and played 33 minutes.

Must’ve been an emotional night for Arvydas returning to Portland. Since Turner has been out, Sabonis has averaged 12.3 points, 11.3 boards, and 2 assists.

Collison does just enough to keep owners from dropping him. Most of the time, though, said owners just walk around aimlessly muttering incoherent words to themselves.

No muttering for owners of Oladipo. They just put their hands in the air and sing….Oladipo Ho! Uh, Oladipo Ho!

Stocktonator was bumping the tune as well. It loved Dipo last night.

Only played 10 minutes due to an illness. Interesting, because his owners got ill as well. Not like Run DMC illin’, though. Just straight puke and vomitting ill.

Will rarely get a ceiling, slate-breaking, week-winning game from Aminu. What you will get is a little something something every game. AAA is always there for you.

Played 32 minutes. This is the kind of game I expect from Nurkic going forward. With that said, he has been very inconsistent this year and last night’s game was against Sabonis, who is terrible defending the position.

The Chinese were very, very happy with Dame’s line. 88888. Anyways, y’all know what time it is:

Played 29 minutes. Coach Stotts said that he wanted to get Napier more run so….