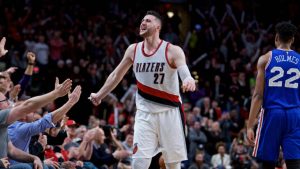 Jusuf Nurkic had a huge afternoon in Brooklyn on Friday. He really took advantage of the Nets’ lack of viable big men. He came to Brooklyn to kick ass and chew bubblegum… and was all out of gum.  29-15-3-1-4-1. He’s got balls of steel! The Nets put up a good fight and it came down to the last shot, but they couldn’t top the Blazers.  This game was played at 12:00 Eastern time, so it could have been a factor in the Nets keeping it close or maybe the Nets are a little better than people think. Either way, they’re still 6-12 on the year, but they’re a very interesting team for low-end fantasy value. Anyway, here’s what else went down on Friday in fantasy hoops:

Damian Lillard – 4-34-4-9-1-1-3. The Omen had another great line. The extra assists are definitely nice, but you’ll have to wait until Lillard can get 10 dimes for my awesome Blazers/Dimebag reference. Skimped dime bag!

C.J. McCollum – 1-26-2-5-1-1-0. The Trailblazers Big 3 all had good games against the Nets. Not surprising if you checked the Stocktonator. It usually likes playing guys against the Nets, as they are one of the fastest-paced teams in the league.  The final score was 127-125, so that’s pretty telling.

DeMarre Carrol – 10-9-3-0-1-1. Christmas Carrol! Not quite yet, and this line came with 2-of-5 FTs, but Carrol’s been such a cheap source of production, even Ebenezer Scrooge would be jealous of your thriftiness.

Kristaps Porzingis – 4-28-4-2-0-2-3. Nothing to complain about from this line, but the Knicks somehow lost to the Hawks. They’re much better at home, but damn…

John Collins – Not his best game, but 13 points on 6-of-10 shooting isn’t bad. Most importantly, he’s starting for the Hawks. If he can learn to avoid foul trouble, look out. I’ll have a John Collins!

Kyrie Irving – 2-30-4-3-1-0-1 .Like Tupac, Kyrie is Still Ballin’. Not too many interesting lines in this one as Boston beat the Magic 118-103 and that’s 14 losses in a row for the Magic in Boston in an Eastern Conference Snoozefest. Terry Rozier got off the schnide with 23 points and five 3’s.

LeBron James – Another huge line: 3-27-16-13-0-3-3 “It was a Good Day” for LeBron as he messed around and got a triple-double. Hopefully, one day, the Lakers will beat the Supersonics again.

Darren Collison – 2-17-3-8-0-0-1. He has been having a great year and I’ve always liked his game for fantasy. His assists are up from 4.6 last year to 6.8 this year and he’s got the Pacers on a Collison Course with a playoff spot in the East. Totally worth it.

Jeff Teague – DNP with a sore Achilles tendon. Tyus Jones picked up the bulk of the PG minutes and went 2-8-6-6-4-0-3. Hopefully, you played him in DFS, as the news of Teague missing the game came kind of late in the day.

Detroit Pistons – Had six players score in double figures and are 12-6 on the year. Stan Van Gundy deserves praise for how he has this team playing and the addition of Avery Bradley might have something to do with it, even if his line last night 1-11-3-3-1-0-5 on 4-of-13 shooting was not very good.

JaMychal Green – 2-21-3-1-0-0-0 on 9-of-9 shooting. The blocks should start to trickle down and I could see owning in 12ers and possibly 10ers.  He’s getting minutes and that’s half the battle in fantasy basketball.

Kenneth Faried – 14-9-1-0-1-1. Got the start for the injured Paul Millsap and had a decent enough game. Might be worth the short term add, but he just never improved his game enough to become a real star. I want to like him, but his opportunities have been coming less and less frequent and he may need a change of scenery to realize his full potential.

Golden State Warriors – Absolutely polished off the Bulls in Oakland.

Draymond Green – DNP Rest. Giannis, Draymond, and Teague all missing games this week. All on my fantasy team. Why God?

Jerian Grant – 3-21-3-3-0-0-2. If you wished for a nice game, Jerian Grant-ed your wish. “You like that!” I dropped him for Doug McDermott… Lesson here is don’t over-manage your fantasy teams. Who could have seen this coming though?

Jordan Bell – 7-6-4-2-6-1 in 26 minutes.  He was the main beneficiary from Draymond’s absence. He had the block party tonight and hopefully, this leads to more games like this going forward, but the Warriors don’t even need much help.

Klay Thompson – My computer autocorrects Klay to Play. So, I’m going to call him Play Thompson. You know Klay gets plenty of play! 5-29-3-1-1-1-4 is a line you’ll definitely take.

That about wraps it up. Hope Friday was good to you and your fantasy teams. Drop a comment or question and I’ll try to answer them promptly.