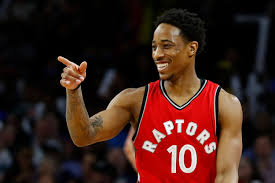 I was very surprised when I Googled Triple D’s. Triple D’s Place, a Jamaican restaurant and Diners, Drive-Ins and Dives. Where were the big, beautiful breasteses? We have truly advanced as a society. Anyways, it’s bad if you get a D in school. Mcy D’s is good when you are hungry. How about for fantasy? Double D, DeMar DeRozan, has been a valuable fantasy player for quite some time. He has averaged over 20 points per game in each of the last five seasons. He has grabbed around 4.5 boards, dished out close to four dimes, 211’d around one, knocked down 82% of his free throws, and shot 45% from the field. The two areas that he lacked in were blocks and threes. Well, last night, DD was lighting it up from three-land.

It’s only appropriate that he shot 6-of-9 from downtown, huh? The Universe is awesome. Now, before you start getting all excited, DD’s season high for threes was only three. On the year, he’s making 0.7 on 2.5 attempts. Well above his career average, but fewer than the 0.8 on 2.7 attempts back in 2013 season. Last night’s game was more than likely an outlier, but we can all dream. I guess that’s the only thing one can do regarding Triple D’s. Unless you like Jamaican food and Guy Fieri.

With how well Lowry rebounds, it always surprises me that he only has 11 career triple dubs. Top 25 player. Hope he stays healthy this year.

Played 21 minutes. Even the Force needs a break from time to time.

Played 16 minutes, as the Amir and Odale Holmes ran circles around him. Can only play JV against slow, lumbering big men.

Since returning from injury, Wright has played 16, 13, 19, and 28 minutes. Prior to the injury, he was getting minutes in the low-to-mid 20s. He’s not the best shooter, but does contribute a little something something across the board and provides versatility.

Played 37 minutes and always gets a usage bump when Embiid sits.

With JJ Redick out, Jerryd Bayless got the start at shooting guard and played 34 minutes.

Odale Holmes. The Amir typically gets the start when Embiid sits, but Holmes is the guy you want.

Man, there’s a lot to hate about Simmons. 55% free throw percentage. No threes. Has no outside shot. And people clown Lonzo. At least he shoots. With that said, he’s still putting up 17 points, 9 boards, 8 assists, 2 211s, and 1 block. Can’t wait till he figures out how to shoot.

The Markkman led the Bulls in scoring and just fell short of defeating the Cavs, 112-115. Now, all we have to wait for is the simulation to get rid of Dirk so Markkanen can get fully unleashed.

Played 36 minutes. If he keeps ballin’ like this, I may have to replace Billy Ray as my favorite Valentine……..Naw, would never happen.

We Dunn got us a point guard in Chicago, boys and girls!

Played 25 minutes, while Bobby Portis played 14 minutes. Hoiberg is playing with fire here. I’m truly frightened that Portis will go all Last Boyscout on someone.

Played 39 minutes. Might as well play him 48 minutes, but then people would get suspicious and start poking around. Eventually, someone would see him plugged into the wall or tightening the bolts on his titanium skeleton or getting the latest software uploaded.

Played 24 minutes. That’s pretty much what we can expect from him this season. The interesting note is that he’s played in all but three games this year. I thought it was more, but hips don’t lie.

There was some concern after he dislocated his right pinkie on Wednesday, but all is good. Tatum could very well join the 1/1/1 club this year. Is Ben the Rookie of the Year for sure?

Top 10 player. Pretty crazy, but so is saying the world is flat. Is Kyrie playing 3D chess while we are tiddlywinking?

Jaylen Brown did not play due to an Achilles injury, so Marcus Smart got the start and played 34 minutes.

The Knicks beat the Celtics 102-93. Shocking, but not terribly so, as the Celtics were playing on the back-to-back. What is insane is that they won with Kristaps Porzingis playing like doo doo.

I think someone has been doing certain activities of a certain kind with a woman that has the initials J and S.

So, who was the savior for the Knicks? Who else? Michael Beasley of course.

Why does Ron Baker play 21 minutes?

The Forrest Gump of fantasy. You never know what you’re going to get.

Played 34 minutes and continues to start at point guard. I’m driving down the highway. The tread of my tire is flat. This is how I feel owning Tyreke. I can still drive at high speeds, but know that at any moment the tire could go…..BOOM!

Tyson Chandler sat so Greg Monroe got the start at center.

Alex Len played 21 minutes and continues to be the reserve center.

No wonder they keep rolling Chriss out there.

Last night, I said that Canaan went prison yard on Mike James. “Yo, Mike. Those minutes look my size.” Well, James was a DNP CD. Dude is a straight gangster.

Played 20 minutes. Me has a feeling that Kawhi will be a tease until February or March. He’s going to rest a few times a week and play around 20 minutes a game. There is no reason for the Spurs to ramp him up until much later in the season.

Pau Gasol sat so Joffrey Lauvergne got the start and played 26 minutes.

King Joffrey is just a name to keep in mind during Spurs Siestas.

With Danny Green sitting, Bryn Forbes got the start and played 24 minutes.

A money line, but always expect more from a Forbes.

Played 38 minutes. ‘Twas a nice bounce back after his pitiful performance in OKC. Just wait till Donovan Mitchell returns from injury.

Played 35 minutes. Hood is awesome when he plays. Unfortunately, he’s always going down. The women must love that. Someone needs to get Hood a Life Alert.