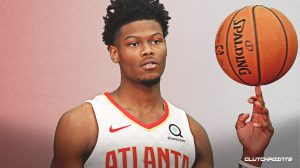 A cam is a rotating piece that transforms rotary motion into linear motion. For example, in automobiles……automobiles??!!……it takes the rotary motion of the engine and morphs it into motion that can operate the intake and exhaust valves of the cylinders. Basically, if the cams aren’t working properly, then the cylinders don’t either, and the end result is the car goes nowhere. But when the cams are working, it’s beautiful harmony. Last night, Cam Reddish was firing on all cylinders.

Got the start and played 36 minutes. Over the past three games, he’s been a top 25 player for fantasy! Varoom varoom! Now to be a party pooper. Cam is shooting 33% from the field on the season. He’s scored at least 20 points only three times this season. He’s scored in single digits 26 times. Yuck. He will get his 211 on but won’t contribute much else. He is the ultimate 3-and-D player. Cam is young, athletic, and does have a nice looking stroke, so there’s optimism that he develops and improves. I’m not buying the current heater, though. I need to see more consistency before I buy in fully. Beep. Boop. Bop. You know what I have complete faith in? The Stocktonator.

Got the start because Wendell Carter Jr. and Daniel Gafford are out with injuries and played 28 minutes. The field goal percentage will be an issue, but Kornet can be sweet and creamy with the tres, boards, and defensive stats. Has value for now, but will go the way of a uniKornet when WCJ and Gafford return.

Markkanen has actually been shooting well, but the playing time has been an issue. The last four games, Markkanen has received 29, 31, 25, and 28 minutes of run. I have no idea what’s going on. What I do know is that he’s eclipsed 20 points just once in the past 10 games. On the season, he has seven 20-point games and two 30-point games. Not the numbers of a Markkanen. I still believe in him and would look to acquire if the price is right.

LaVine has been fantastic recently. If you read me on a daily basis, then you know I’ve laminated my LaVine posters with a special material that makes wiping sticky substances off easier. Over the past seven games, he’s been the #4 player for fantasy. The usage rate has been 32 and he’s been converting 51% of his 21.6 shot attempts! That’s translated to 30.7 points and 3.7 tres. LaVine has also contribued 4.9 boards, 4.6 tres, 1.9 steals, and 0.6 blocks. I better add another coat to those posters.

Got another start for Joel Embiid and played 32 minutes. Al isn’t a sexy fantasy option and is often underappreciated, but he delivers the goods. You may not think so on a night-to-night basis, but at the end of the season, you’re going to get top 40ish production. Now, when Embiid returns, the production will decline, so always be aware of that.

Top 35 player despite bagels in the tres department and the field goal percentage being close to the free throw percentage. Now, if he shot 80% from the field, that would be freaking amazing. Unfortunately, he shoots 56% from the field.

What a Furkan performance by Korkmaz in 27 minutes off the bench. Are you Furkan kidding me? Naw, Son. It really happened. Korkmaz is a tres specialist who only plays around 20 minutes per game. Don’t Furkan chase this performance.

Is this real life? KAT actually played a game? O. M. G. The last time KAT played in a game was back on December 13th. The bastion of health his first three years in the league, KAT has now missed a total of 17 games this season. How many lives has he used? How many does he have left? For fantasy, as long as he’s healthy, he should be a top five player for fantasy. In his return last night, he garnered a usage rate of 40!

Warren continues to regulate the opposition and for fantasy. Top 70 player on the season. Coming into the season, I expected the tres attempts to come down, which they have, but the efficiency has been better. It’s kind of scary how close the numbers are to last season, when he finished as a top 50 player on a per-game basis. He just needs to stay healthy.

The Wizards got destroyed, 111-140 in Toronto. As a result, three of the starters played fewer than 20 minutes and Bradley Beal only played 23 minutes. Isaac Bonga contributed 17 points, 10 boards, and 1 steal in 29 minutes. Troy Brown Jr. contributed 22 points, 8 boards, 1 dime, and 3 steals in 26 minutes. Don’t glean much from this game. When Bonga is the headliner, you know it’s time to move on.

Due to the Wizards sucking, no Raptors starter played more than 29 minutes.

Kyle Lowry only played 22 minutes. He did miss a few minutes going to the locker room after banging knees, but he returned and was fine. With the game in hand, it was wise that Nick Nurse’d him to health, as he was averaging a whopping 38 minutes per game.

Played 24 minutes off the bench. He usually averages 17 minutes, so got an extra seven minutes due to the blowout and Lowry injury. Davis isn’t viable unless injury strikes, and will move further down the depth chart when Fred VanVleet returns.

Top 20 player over the past four games. For the first four years of his career, Powell never averaged more than 19 minutes per game. So far this season, he’s at 29 minutes per game. Over the four games referenced earlier, he’s provided 20 points, 3 tres, and 1 steal. The field goal percentage has been 59% while the free throw shooting has been 90%. Even when VanVleet returns, Powell will be the main scoring option off the bench.

In 26 minutes. Top 50 player over the past six games! Top 15 player over the past three games!!! He’s been shooting over 60% from the field, so the offensive output won’t continue to this degree. He’s usually a 50% shooter and he averages around nine shots per game. Where the Force is the strongest with O. G. is in the boards and defensive categories.

Since returning from injury three games ago, Siakam has been a top 100 player. The 28.3 minutes per game is one reason, but the others have been the lower usage rate, shooting efficiency, and lack of boards. This is another example of why we don’t need to rush to activate guys from the IR. It takes time for them to get back into the groove. P. S. – He will be fine.

In 27 minutes off the bench. On a 10-day contract and is getting run due to the Kevin Porter Jr. injury. Nothing to see here. Stop rubbernecking! You’re causing a traffic jam!

Sexton has been providing plenty of pleasure lately, averaging 23.5 points per game over the past four games. Unfortunately, he needs to expand his repertoire. Kamasutra manual perhaps? Despited the robust scoring, he’s still outside the top 100 because he doesn’t provide much outside of points and tres.

Jaren Jackson Jr. only played 20 minutes because…..class? Foul trouble. Shocker. That and the low rebound numbers are the only things holding him back from stardom.

In 32 minutes. Valanciunas has now played at least 30 minutes in only seven games this season. Such a shame because he’s a monster when he plays. Over the past 14 games, he’s been a top 25 player despite averaging only 26.8 minutes per game!

If you need tres and nothing else, then saunter on down to the Brooks. Memphis is playing at the fourth-fastest offensive pace and Brooks is jacking up around 14 shots per game.

Just another Trae Day. Oh, what a day it is. He’s currently a top 25 player. If he can improve on the 4.7 turnovers, top 10 player isn’t out of the question, as the points, tres, and dimes are elite. He boards well for a player his size and gets his 211 on. The only thing he doesn’t provide are blocks.

In 33 minutes. Only the third time receiving over 30 minutes of run in a game. The last time was back on December 14th. Hopefully, Pop unleashes him now, but I need to see it first. For fantasy, Murray will provide dimes and steals, but his biggest contribution comes from boards. He is one of the better rebound guards in the league and is averaging 6 on the season. Over the past three games, he’s grabbed 8.7 per game.

LMA with the O! Not much else, though. We were enamored at the blocking prowess earlier in the season. It was as if the spirit of Mutombo entered him. Well, over the past seven games, he’s blocked 0.6 per game, way down from the 1.7 on the season. Over the past four seasons, LMA has been in the 1.1 to 1.3 range.

Melo is scoring and grabbing boards. He’s even getting his 211 on, but I’d just rely on him for points and tres. Top 50 player over the past three games and he’s averaging 34.5 minutes per game. As long as he shoots well and gets the run, he’s fantasy viable.

In 40 minutes. The only category Lillard doesn’t contribute in is blocks. Everything else is….

It’s so difficult staying away from the Hardaway bets, especially since when they hit, much joy is delivered. They aren’t the best bets, though, and will disappoint more often than not. THJ provides points, tres, and boards. He’s also averaging 29 minutes per game and jacking up 13 shots per game. When he shoots well, he can deliver top 90 production. When he doesn’t? Seven out!!!

In 29 minutes off the bench. Curry is intriguing because he gets hot and spicy from time to time. The only problem is that the consistency is lacking. The Goldilocks conundrum I guess. Sometimes it’s too cold, while at other times the minutes are lacking. When it’s just right, though, it’s pretty, pretty good.

This is one lucky Butler, as he gets plenty of help on a nightly basis. For fantasy, though, that’s not so great as the usage and shot attempts are lower than most of the other stars. With that said, he’s still a top 15 player on the season, but the value vacillates wildly. For instance, over the past three games, he’s been a top 75 player.

Since 1946, there have been 10 times a player has averaged 20 points, 10 boards, 5 dimes, 1 steal, and 1 block per game in a season: Giannis Antetokounmpo (twice), Larry Bird, Kareem Abdul-Jabbar, Charles Barkley, DeMarcus Cousins, Kevin Garnett (three times), and Chris Webber. Through 41 games this season, Bam is averaging 15.9 points, 10.4 boards, 4.6 dimes, 1.2 steals, and 1.2 blocks. He probably won’t join that club this season, but it’s a definitely possibility going forward. I can’t wait to see what his eventual ceiling is.

Top 25 player over the past seven games. Gallinari provides points, tres, boards, and excellent free throw percentage. He’s been averaging 4.1 tres over that span. What’s the over/under on when he gets hurt? Has the peanut gallery set a date yet?

Got the start because Steven Adams was out due to a knee issue. Noel only played 21 minutes, though, as Mike Muscala played 27 minutes. It doesn’t look like Noel will ever get unleashed, but it doesn’t matter because he’s been very productive in the limited number of minutes he does get. On the season, despite averaging only 18 minutes per game, he’s been a top 65 player due to the boards, steals, blocks, and excellent field goal percentage.