The name Reggie brings a few players to mind. Reggie Jackson, Reggie Smith, and of course, Reggie Miller. That awkward, yet smooth, combo of grace and precision known as a shooting form. Reggie Miller is one of the greatest shooters of all time. 6’ 7″ shooting guard, able to rise up (barely) above the smaller defender to snap the net with a perfect rotation. Anyone who averaged 1.8 3PM for their career before 2008 is basically a champion, especially considering that his 4.7 attempts per game for his career is a joke these days. So what’s in a name? The name Reggie. 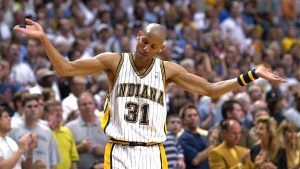 As you all know, Blaaaaaaake was traded to Mo-Town and is now surrounded by just about nothing but Andre Drummond, scraps, and shooters. One of those shooters is named Reggie. Ironic? Yes. As talented? No. But is there opportunity for very useful fantasy lines? Yes again. Reggie Bullock is a four year pro, who has suited up for 3 teams, and has yet to get a real opportunity. Now is that opportunity. Since Avery Bradley has been hurt, and SVG has been toying with different lineups, Bullock has been playing around 30 minutes per game, scoring 10 points and hitting 2.4 threes per game. Those numbers should go up, as Tobias Harris and Bradley have now left for warmer pastures. This Reggie happens to be 6’ 7″ like the Reggie we discussed above, but let’s not get carried away. Between Bullock, Luke Kennard, and Stanley Johnson, the perimeter players are nothing to write home about. Blake is going to have the ball in his hands a lot. Ish Smith is not a threat from the outside. SVG has said that he likes Kennard, but I think Bullock is the primary beneficiary from this trade and the best bet for long term production for fantasy purposes. 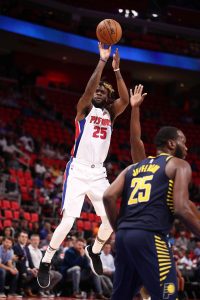 As the trade deadline nears, I hope to highlight a few players who could see an uptick in minutes and in return, a ton of production. Remember, here at Beyond the Glory, we look deeper than the classic pickups that everyone is suggesting, so I hope this can help you win a championship;

Bam Adebayo – If, and that’s a big IF, Hassan Whiteside is dealt, Adebayo will be in line for some massive stat lines. He is a great stash.

Bobby Portis – Mirotic looks more and more like he will be moved at the deadline, which will #FreeBobbyPortis (Updated: Mirotic is reportedly being traded to the Pelicans)

Frank Ntilikina – The Knicks should be sellers, moving Kyle O’Quinn and Courtney Lee most likely. The keys will be handed to Frank.

Nerlens Noel – He is set to be back after the deadline passes, and could be inserted into the lineup, or someone’s lineup, and produce thereafter.

Jonathan Isaac – Not many players have the upside to hit threes, block shots, and steal many balls. Isaac is one of them, and when he comes back and the Magic are tanking, he should get a real chance.

Jarrett Allen – The Nets have four centers, but none possess the upside of Jarrett Allen. He could be huge and is only 19 years old. Why not see what he can do?

Great run down. I totally agree with all your points. I am also kinda high on Bullock, but he comes with a 75% chance of bust. But as a bench stash for the potential to produce he is worth it.

I feel bad for Noel. He passed up his chance to cash in, he bet on himself, and he lost…big time. I really hope he does something this season.

12 team h2h 9 cat keeper league.
Got offered Jrue and an 8th rounder next year for Dejounte and a 13th or Kuzma (drafted in the 9th) and an 8th for dejounte and a 13th. What do you think? Dejounte was’t drafted so he’d be my 13th next year if I keep him. Jrue was drafted in the 5th round so I’d lose my 4th next year if I kept it (not worth imo). I’m currently 10th in the league, 3 games out of the last playoff spot. I’ll be looking to keep lavine (lose 9th round), possibly randle (lose 6th round), and possibly kanter (lose 9th round).
My squad:
* Guards: Lillard, Elfrid, Lavine, Dejounte, Rondo, lamb
* Forwards: Lebron, Bullock
* Bigs: M. gasol, Randle, Kanter, Dirk, Z.bo (stream)

Would you take either trade or just keep dejounte? Thanks

I think Murray might be the better play for next year considering the round value.

@Mel:
That was quick. Tough decisions thanks mel!

I think Murray might be the better play for next year considering the round value.

Ooooo That is very enticing.

Westbrook best player & Dragic a nice piece. Boban is a wildcard as of today.

As for what you give up, Lou is a sell high, CJ coming off a 50 burger is at peak value and Gasol is fantastic, of course, but will lose value when he has no one around him and is shooting 20 shots a game. Normally that’s a good thing, but expect his FG% to dip and TOs to rise.

I think…. and don’t blame me if wrong… I would take Westbrook