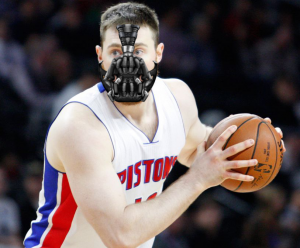 There was no Batman in Boston last night, as Aron Baynes ran roughshod over the team from Tinseltown. 21 points, eight boards, and three dimes in 23 minutes. The 21 points were a team and career-high. Baynes was drilling jumpers from the elbow, dunking over hapless defenders on the baseline, setting screens then pinning smaller defenders onto his buttocks, jump hooking with the right, jump hooking with the left, and skying through the air for putback dunks. It was quite the performance. Thanks Batman. Signed, Lakers fans. Now, Baynes played a prominent role because Al Horford missed the game due to a concussion. Horford missed nine games last season due to a concussion, so there’s a chance that Baynes continues to wreak havoc on the league. Interestingly enough, Charlotte, a team that supposedly has a Superman, is next on the docket. In two games, they travel to New Jersey, which is a hop and a skip from Gotham City. DFSers heeded the signal and played him last night. He’s worth an add for the quickie, as the Celtics are super-thin in the front court.

Jayson Tatum left the game after nine minutes due to an ankle injury. It’s unknown when the injury occurred, but Tatum asked to be taken out. His status is unknown.

Jaylen Brown did not shoot the ball well, 3-of-11 from the field, but he grabbed 11 boards, dished out two dimes, and pilfered one. It’s super duper early, but is Brown going to be the league’s next Kawhi?

Brandon Ingram scored 18 points, grabbed seven boards, dished out one dime, and pilfered two in 37 minutes. I can’t wait to see the player Ingram develops into.

Kyle Kuzma scored 10 points, grabbed six boards, and dished out one dime in 34 minutes. The Celtics are a very good defensive team, with length all over and the ability to switch. I’m not worried about Kuz, but he isn’t contributing in defensive stats. Stocktonator ain’t worried, as it likes Kuzma’s next matchup against the Wizards.

Julius Randle scored 16 points, grabbed 12 boards, dished out two dimes, and pilfered one in only 21 minutes. Randle has only played more than 20 minutes in a game three times this season. He can play all the front court positions and stuff the stat sheet. Hopefully, he gets more run as the season progresses. His ceiling is too high to let go.

Myles Turner scored eight points, grabbed six boards, dished out one dime, pilfered two, and blocked one. I just found out today on Twitter that his nickname is The Odometer. I love you Twitter.

Al Jefferson scored 19 points, grabbed six boards, dished out two dimes, and pilfered one in 22 minutes. What year is it?

Thaddeus Young scored 16 points, grabbed six boards, dished out four dimes, and pilfered one in 35 minutes. He’s a top 30 player. He’s averaging almost 38 minutes per game this month. There is the possibility that he loses minutes when both Myles and Sabonis are healthy, but let’s deal with that when the need arises.

Andre Drummond scored 14 points, grabbed 21 boards, dished out four dimes, and blocked one in 34 minutes. He went 0-of-7 from the charity stripe. All is right in the world. Hallelujah!

Kristaps Porzingis did not start due to an elbow injury. He’s considered day-to-day. Michael Beasley got the start and played 20 minutes, while scoring four points, grabbing four boards, dishing out three dimes, and blocking one. Isn’t Beasley the left-handed Melo?

Tim Hardaway scored 26 points, grabbed 11 boards, dished out one dime, and pilfered one in 38 minutes. The dice were his and he was shooting. Good thing I kept betting the Hardaways.

Doug McDermott scored 13 points, grabbed two boards, and dished out a dime in 30 minutes. The boy can shoot, I’m not sure the 54% from the field and 43% from downtown are sustainable, but just keep pressing and parlaying.

Frank Ntilikina scored six points, grabbed four boards, dished out nine dimes, pilfered one, and blocked one in 23 minutes. It’s only a matter of time. I fronted on him coming into the season, but he’s impressed me. He has a decent stroke from outside and is a good facilitator. The defense was never a question. My one issue is his ability to break defenders off the dribble. I saw him struggle a bit. With that said, he’s young and is going to get better. He’s going to start at some point and looks to be a good complement for the Lord and Savior Kristaps.

Enes Kanter played 20 minutes, Kyle O’Quinn played 20 minutes, and Willy Hernangomez played eight minutes. I’ve gone through so many theories to try and explain this shituation. The newest one is another one from Marketing. Any of you been to a carnival and played the Guess Your Weight game? Someone better be getting a raise in Marketing because they have been putting in work.

The Heat had an eight man rotation.

No biggie, as they were playing the Suns and it was Goran Dragic REVENGE narrative night. 29 points, nine boards, and four dimes in 38 minutes.

Dion Waiters returned to action and scored 16 points, grabbed three boards, and dished out three dimes in 26 minutes. The plane boss! The plane!

Josh Richardson scored four points, grabbed six boards, dished out one dime, and pilfered one in 29 minutes. He’s getting minutes and contributing in the ancillary stats. He just won’t be a consistent scorer, at least not yet.

Marquese Chriss scored 9 points, grabbed 9 boards, and hoisted 9 shots. Turn that frown upside down. Either do a handstand or grab your monitor and turn it 180 degrees. What do you see? Chinese is not the correct answer. 666, which is what Chriss has been to fantasy owners. To make matter worse, which is a tough task considering we just incorporated the Devil, but Jared Dudley played 23 minutes and was productive. 13 points, five boards, four dimes, and one steal.

Tyson Chandler did not play due to a back issue, so Alex Len got the start. 19 minutes, six points, three boards, and four turnovers. Dragan Bender scored five points, grabbed one board, and dished out one dime in 27 minutes.

The one takeaway from the 125-101 loss for the Timberpuppies is…Thibs is going to give his guys minutes. And frankly, that’s all we give a shit about. He had his starters in the game, down 20, with like five minutes to go. WWPD. What Would Pop Do?

Kevin Durant did not play due to a bruised thigh. Omri Casspi got the start and scored 13 points, grabbed three boards, dished out a dime, pilfered two, and blocked three. Now they are just showing off.