The Writer’s League is supposed to be for the Razzball writers. With Son being a dummy and not password protecting the league, we were infiltrated by a fan. But with that mishap, sweet lemonade was squeezed from the lemons because Kelder23 has graciously written about his experience. Enjoy!

Brian Kelder here, been playing fantasy hoops since the 90s when I would compile the stats by hand. I
had a league fold and decided, regardless of my talent level and prognosticating ability, to join a
writers’ league. I have no idea what I’m doing, but here are my basic rules:

First Round: Draft a safe guy who will play a lot of games with elite production.

Second-Third Rounds: Find breakout guys who will be in the first round next season.

Rest of Draft: Get guys I like to watch who also fill categories.

First Round: I’ve been tooting Jayson Tatum’s horn since he was at Duke. The guy just has it. I always get a bit
excited about picking him in the first round. Actually, the entire first round was good here. I shy away from guys over 30, so no Lillard, Durant, Curry, or LeBron.

Second Round: I was completely surprised by the run of Lillard-Kyrie-AD-KAT-LaMelo. I didn’t think any of those guys would go this early due to their obvious question marks. I was happy to go with Anthony Edwards as my guy who I predict will be in the first round next year. Much more upside than the guys ahead of him. Why do people think LaMelo’s shooting is going to improve when he’s on a bottom-5 team? I probably should have gone big here but I thought someone would slip to me the next round. Happy to draft the next big thing in the NBA.

Third Round: Scottie Barnes!!!! My first bad pick!!!!! I failed to notice how many great bigs and point
guards were flying off the board while I took three wings. Doing it over, I should have grabbed one of
these big guys, especially in a 2-Center league, over Edwards and grabbed Barnes here along with them. My team is too similar and doesn’t dominate in any category, which is an issue in head-to-head leagues. This boxed me in in the next rounds, needing size and assists/steals desperately.

Rounds 4 and 5: Vooooooooooch and Jalen Brunson: I needed a big, so I took Nikola Vucevic, who doesn’t block shots and isn’t an elite percentage guy. Thought about Mobley, but risky in that he might not actually be that good yet, or Jarett Allen, but went for a guy who maybe, maybe, please, maybe might be a good center for my beloved Bulls. Jalen Brunson was the last point guard that I thought was a legit number one, so I took him and his unflashy self and hope Thibs gets one year out of him before the 42 minutes per game break him. Looking back, they both have a high floor and a low ceiling. More than likely they will just be solid stat stuffers, the unsexy guys who can help you win without bragging about them.

Rounds 6 and 7: Big drop in talent at this point, both in the draft and on my team.
I drafted Ben Simmons and rookie Paolo Banchero. This is why I should have paid more attention to positions earlier instead of taking guys that I like, but oops. Banchero I guess could be good and if
Simmons plays………….WHY DID I TAKE A NET? THAT TEAM IS A TRAINWRECK AND……………………I guess if he’s 12-7-7 this year we could make this work. I looked at my rebounds and assists, which were low, and am praying and lighting incense that Simmons can at least provide that, kinda the Draymond role. Hahahahaha I said that out loud! I almost believed it!!!!!!!!

Rounds 8 and 9: The hunt for categories continues. So I needed blocks and fg% so reached a bit to get Mitchell Robinson. Could win a couple categories, unless of course he plays 20 minutes which could happen. Then I took the Alex Caruso. The Carushow is my favorite player and I love him and want to steal his headband and frame it over my work desk. Not my bed, you sickos.

Depth picks were depth picks. Whatever you guys don’t care. Monte Morris was the highlight here.

Final Analysis: This was probably the most talented group I’ve ever drafted against. Some of them get
paid to play fantasy basketball! What was I thinking joining this league! Why did I draft all wings!!!!!
Why did the Bulls build their team all around Zach LaVine!!!!! All unanswerable questions. I think I have a well balanced team, and some plausible upside, but this group looks tough. One guy is so confident that he drafted all guards, including Kyrie, and has Olynyk as his center! How can I compete with such hubris?

It should be fun, and looking forward to challenging myself against top level dudes.

Here’s the draft board: 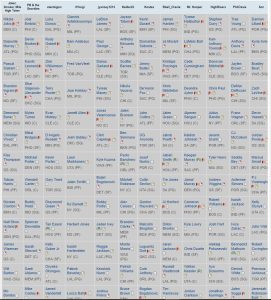 Go ahead and shred my team in here, what do I need to fix?

Draft my final team for the season and unless it’s me, I don’t think I’ve ever drafted a better team.

I think aside from Blocks I’m good

Last edited 3 months ago by TarmanGotHim
0

1. Overall impression?
2. Any swaps from the wire?
3. Pick one guy to drop as a streaming spot please.

Thanks for your help.

strengths are points, dimes and ft
weakest in turnovers, blocks, rebounds and fg%

First, Dodgers!!!! What the heck? That payroll gives you that bullpen and outfield? Sad.

Sorry if this is a dupe. Thought I had posted it earlier.
12 teamer, 9 cats.
Best on the WW: A Gordon, Issac, BogBog, Onyeka, Olynyk.

1. General impressions on this squad below?
2. Any swaps off the wire?
3. Any sleeper you are rostering on your teams?
Thank you

It’s okay. It’s baseball. The goal is the get to the playoffs because anything can happen in the playoffs. Doyers have made the playoffs in 10 straight years with 3 WS appearances and 1 chip. Should’ve been 2. Squad is built for long term.

As for squad, looks like strengths are points, treys and ft%.

Weakest in boards and steals.

Tons of sleepers but they are probably too deep for your league.

Hey Son, I had my 14 team dynasty auction draft last night. What are your thoughts on the squad? 9 cat, H2H

That’s a really good team for a 14 team dynasty