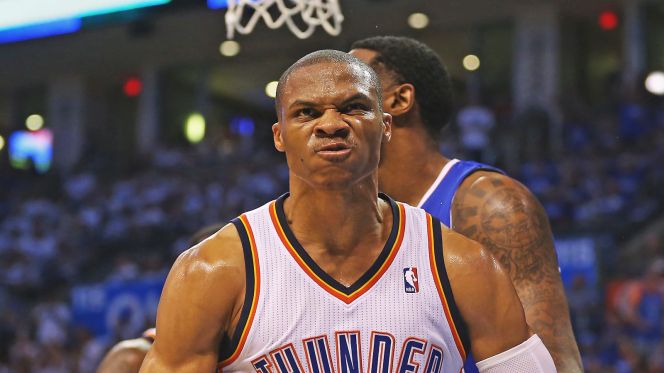 I imagine this a good representation of the frustration Westbrook feels inside… I am currently writing this article during halftime of the Thunder/Warriors game, and frankly I don’t think I have the heart to watch the second half.  OKC came out of the gate in a strong fashion, but a Jerami Grant posterization of KD led to a Slim Reaper onslaught that buried the Thunder.  More on that below…

It’s now time for my debut on the daily notes! I’m going to format it a bit differently, so feel free to give feedback on whether it’s better, worse, or if you don’t care at all.

This game was rather ugly for the Kings, but that’s par for the course.  The Magic looked played like a cohesive unit, and they showed a lot of grit.  With this level of play, this Magic squad will be playoff bound. On the other hand, Sactown is the same set of talented players that can’t work together.  Frankly, they looked better as a team when Cousins wasn’t on the floor, despite Cousins’ impressive line.

The Pacers frankly looked lethargic in this one.  Giannis and Jabari simply out-hustled the Hoosier squad.  If Middleton were healthy, this could be a contending team.  I bet they still make the playoffs without him though.

Probably the most entertaining game of the night.  Bjelica missed the game tying three at the buzzer, but the game was back and forth most of the time.  The big standouts were Jameer and Nemanja, who weren’t getting huge minutes prior to this game.  Both played down the stretch in a close game.

The Cavs toyed with the Celtics all game, and while it was close at points, the final score was not a great indicator of the Cavs overall domination. The normal suspects contributed for both sides, with one exception.  The big news in this game was Jaylen Brown bursting onto the scene with Crowder down for a few weeks.  Run to the wire and stream him if you can!

It is now the 4th quarter of this game, and it looks like the starters have been taken out for both sides… It is 74 to 102 with 9 minutes left.  This game simply didn’t lead to much happiness from a fantasy or reality perspective.  These scores are from the time of writing, but I doubt they’ll change much.

That’s it for me today everyone!  My notes after this week won’t be so long, but I figured I’d go all out for my first one.  Let me know what you all think of formatting it by game!  Have yourselves a Razzy day!  Damn that was cheesy..