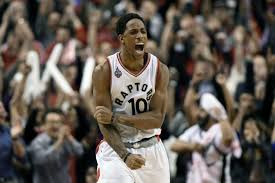 A little over a week ago, I had DeMar DeRozan as the lede, which you can conveniently read HERE. I got no shame in my game for clickbait. As I’ve mentioned in the past, I try not to write about the same players, but sometimes it’s an inevitability. Especially on a four game slate. Now, last week DeRozan scored 45 points and went 6-of-9 from downtown. Due to the three-point shooting prowess, I labeled DeRozan Triple D and proceeded to do what any normal human being would do….Google it. To my surprise, I did not see big breasteses, but instead saw links for a Jamaican restaurant and Diners, Drive-Ins, and Dives. At the time, I was kind of disappointed, but like with most things in life, it takes time for things to come together. Last night against the Bucks, Triple D dropped a 50-burger. Nom nom nom. Guy Fieri was so impressed that he got DeRozan’s face tattoed onto his forehead.

I still don’t think the shot from downtown is a staple in DeRozan’s game just yet. Including the two nine-shot attempt games, DDD is only averaging 2.9 a game. Let me take away one of those D’s. Granted, that number is well above his career 1.5 mark, but he did have a season back in 2013 when you attempted 2.7 threes a game. Currently, DD is a top 40 player for fantasy. If he can incorporate that three-point shot into his arsenal on a consistent basis, it’s going to open up the rest of his game and have him shooting up the rankings. 52 and 45 points scored the last two games he’s attempted nine downtowners. Seems like a logical path to take.

Iblocka!!! Unfortunately, I remember when he was IBLOCKa, swatting away 3.7 shots per game. For shits and giggles, I looked up who had the most blocks per game in a season. Mark Eaton with 5.56. Ha!

A very impressive game for OG. Zero shot attempts in 35 minutes. Is this part of Jedi training?

Played 16 minutes, as the Raptors went small with Serge at the 5. Send him to the JV squad.

EB will score, rebound, and chip in some dimes, but he’s best known for his steals. Not too different from walking into an EB Games store.

Can’t wait until he gets the downtowner into his arsenal. I’m still going to continue advocating that Jason Kidd looks through some Olympic handball tape and draw up plays for G from them. He could jump from behind the line and finger roll it in for three points.

Played 41 minutes in another OT game. Geez, calendar flips to 2018 and everything starts bugging out. Anyways, Aminu must’ve had a really good New Year’s Eve. Hmmm, now that I think about it, it was probably shitty and he ended up getting blue balls, which he alleviated against the Bulls. Aminu is a fine fantasy asset, as he will provide a little something something across the board. Just don’t expect ceiling games lik…..I can’t even say it’s a ceiling game. More like outlier game like the one last night often.

The important number is 38 minutes played. Since coming back from injury, he had not played 30 minutes in a game, a stretch that spanned eight games.

Damian Lillard sat again so Shabazz Napier got the start and played 41 minutes.

Shabazz!!! Remember Shaq’s Kazaam? Well, for those that don’t, you are a blessed group. For those in Colorado and California, go get that wacky tobacky and bring in the new year on a……depends on how much you consume…..note. He’s an obvious start when Dame is out, but he’s actually been productive in the 20 or so minutes he’s received when Dame plays.

When Dame sits, CJ sees a usage bump of over 6%.

He’s not fantasy relevant, but he has played in the low-20s for the past five games and scored in double figures in two of those games. It’s the new year and I’m hoping my good deeds shall be rewarded. Damn it. Good deeds should be good deeds without selfish reasons. I know how to jinx the jinx, but I’ve already written that I want my good deed rewarded. Any of y’all have any suggestions?

He had a 34% usage rate, which looks to be the real deal Holyfield. Were there a bunch of fake Holyfields roaming the Earth at one time? Like an army of Elvis impersonators?

Played 19 minutes. Kind of baffling that he doesn’t get more run. Per 36, he’s at 25.5 points, 9.9 rebounds, 2 assists, and 4.3-of-8.9 downtowners. Fred Hoiberg is a smarter man than I realized, as he has to give Bobby Portis run. Don’t want a Last Boy Scout incident happening.

Since returning from injury, the Commissioner has logged 30, 36, and 41 minutes. He’s scored 14, 39, and 20 points respectively. Prior to the injury, Gordon was top 25 player for fantasy. No reason to think that he won’t be able to maintain that level, health permitting.

Played 30 minutes, which is good. Had a usage rate of 12.1, though. Not good. Over the last nine games, Dinwiddie’s usage rate has been above 20% only three times.

Played 27 minutes, but only rarely gets above 30 minutes a game. Free KRS!!!

Played 20 minutes. Why the Nets continue to trot out Tyler Zeller is beyond me. Allen could see an uptick in minutes going forward, but Jahlil Okafor may start getting some minutes soon. If Okafor isn’t a POS, he and Allen could make a nice little tandem at center. My optimism with Okafor has definitely subsided with the recent play of Allen, as I doubt he gets a full allotment of minutes.

The Lakers were playing a back-to-back in Minnesota after going…not one, but two OTs against Houston the night before. It was understandable that many struggled,

Received the start at center again and played 28 minutes. Back-to-back double dubs for Julius. Has Luke Walton been listening to some Kendrick Lamar lately?

Only played 18 minutes, as the game was a blowout and Kuzma tweaked his quad. It doesn’t sound serious, but they may want to give the rookie some much needed rest after his torrid 10 game streak.

With Lonzo Ball and KCP out, Tyler Ennis and Josh Hart got the starts in the backcourt again. Ennis played 23 and scored seven points, while Hart played 21 minutes and scored 10 points.

Ok, sorry guys for the abbreviated post. I’m sick and started deteriorating as the night went on. What a way to start the new year. I don’t think it will require a DL stint, so should be good to go very soon.