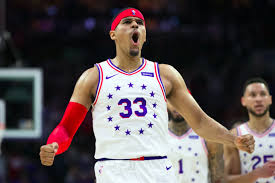 Every time I think about Randle, my mind thinks about Terminator. Randle is the T-800. Not the first Terminator model, but a good one that can score, board, and dish out some dimes. But there’s a new model in the NBA world, and that is Zion Williamson, akin to the T-X. Zion can do it all, but is still calibrating the arsenal. Once he’s up to speed, it’s game over. With that said, Randle, like the T-800, will continue to battle, but at the end of the day, he is just outgunned. On the season, Randle is a top 170 player. The free throw shooting isn’t great and the defensive contributions are minimal.

Played 36 minutes in his second start after returning from injury. Elf boards well for a guard and provides those precious dimes. He even gets his 211 on, although the police presence must’ve been intense last night. With that said, he doesn’t provide the tres and the shooting efficiency is usually poor.

Bobby Portis got the start at center, but Mister Robinson’s neighborhood was open for 32 minutes last night. I still don’t understand why he’s not starting, but whatever. As long as he gets the minutes. Over the past four games, he’s averaged 26.1 minutes, 9 points, 10 boards, 1 steal, and 3.8 boards while shooting 80% from the field on 5 attempts. The big bugaboo has been the free throw shooting: 44% on 2.3 attempts. On the season, it’s at 57% on 2.3 attempts.

With Joel Embiid out, Horford got the start and played 34 minutes. He has the ability to contribute across the board and should get plenty of run with both Ben Simmons and Embiid out.

Shake, rattle, and score. Milton got the start for Simmons and played 32 minutes. He’s been a top 30 player over the past four games, averaging 29.3 minutes, 15.8 points, 3.8 tres, 3 boards, 4 dimes, 0.5 steals, and 1 block on 59% shooting from the field. Now, the shooting efficiency is going to come down hard, and don’t expect him to get his Mutombo on nightly, but points, tres, and dimes should be.

In 14 minutes off the bench. So strange because Norvel Pelle had overtaken him on the depth chart earlier. Now, Pelle was a DNP-CD. Not sure how things will shake out going forward, but KOQ could be a viable big man who contributes boards and blocks if he is indeed the backup big man.

Is Whiteside the fantasy MVP? In Yahoo leagues, he was drafted as the #75 player. Over at ESPN, he was the 57th player selected. He’s only been the #9 player on the season.

No Dame, then Urkel comes out to play. I kid, I kid. You know the drill. Usage rate spikes when Dame is off the floor for C. J.

Got the start and played 41 minutes. The shooting efficiency is an issue for Trent, but he will jack up shots with Dame out and provide some tres and steals.

Ho hum, just another dub-dub for Sabonis. He now has 45, two behind Giannis for the league lead. He’s dishing out 4.9 dimes on the season, and there are stretches when that number is above 7. The 4.9 on the season places him 39th in all of basketball.

Seriously, which universe is this? Melo isn’t jacking up tres and contributing the D, while Turner grabs 10 boards in a game? What?! Fine, he’s gone back-to-back games with 10 boards, but he’s reached that number only seven times all season!

He’s been bad for a while now. The main culprit has been the shooting efficiency. The boards, dimes, steals, and low turnovers have been there. It’s too bad he got injured earlier in the year, as it seems like it’s hampered him all year.

This is why I’m hesistant to stash injured players. It takes them a while to get back up to speed and there’s a heightened risk of re-injury. Since returning to action, nine games worth, Dipo has been a top 400 player.

Continues to start and played 24 minutes. He looks good out there. Giles can score, grab boards, and is an excellent passer. The free throw shooting is poor, but the field goal percentage is excellent. The defensive stats are lacking, though. The Kings probably won’t give him more than 26 minutes per game, so he’s capped. Plus, if Holmes returns, then it’s game over.

Got the start and played 35 minutes because De’Aaron Fox was out due to an abdomen injury. Joseph provides dimes and steals when he plays, but normally only plays around 20 minutes when Fox is healthy.

Mehrrison will always suck, no matter how many points he scores.

In 21 minutes off the bench. As long as Holmes is out, Len is going to get run. Boards and blocks will be his primary contributions, but he does have range from downtown if the Kings utilize the skill. If Holmes returns, it will be interesting to see how the center rotation shakes out.

Points, tres, boards, and excellent free throw percentage are provided on the regular. The only question regarding Gallinari is when he will get hurt.

In 20 minutes off the bench. He’s now played 20 minutes in back-to-back games. Whew. I was getting worried for a sec when he played 8 and 11 minutes five games ago. Boards, steals, and blocks should be delivered on the regular now. If he gets a consistent 20 minutes per game, top 60 production should be expected.

No LeBron James in this one, so Davis got a taste of what life will be like in a few years. The game was close for a half, then a 40-17 run in the third quarter blew the game wide open. As a result, AD only played 25 minutes. Thank the Warriors for being pacifists.

JaVale McGee, Rajon Rondo (who got the start), and Avery Bradley all scored 12 points. 12 is my favorite number and I enjoy symmetry.

Impressively terrible. Or maybe Green is an another level, sending messages to the aliens through his stat lines. Any coders out there able to decipher the message?

In 29 minutes off the bench. He was decisive and breaking defenders down off the dribble. He can score, but doesn’t contribute much in the other cats.

In 24 minutes off the bench. Like I said, a strange night in the NBA last night. You really know it’s crazy when Dwight stuffs the stat sheet AND makes his free throws. He’s averaging less than 20 minutes per game on the season and is primarily a boards and blocks guy.

Only played 10 minutes due to getting ejected. Draymond had enough and didn’t appreciate Steph and Klay sitting on the bench, looking all nice, with their smug little faces enjoying themselves. What happened to all for one and one for all?

In 27 minutes off the bench. Paschall is a points and boards player. He has been averaging 33 minutes per game over the past three, but he’s likely to settle in the 28 minute per game range.

Andrew Wiggins was a late scratch due to back spasms, so Dragan Bender got the start and played 22 minutes. Before you ask, no.