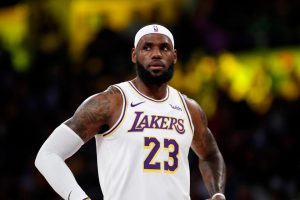 The Lyndon Baines Johnson presidency was a misunderstood one. Beep. Boop. Bop. You know what’s never misunderstood? The Stocktonator. Most view the administration unfavorably due to the Vietnam War, but LBJ did much to improve the domestic situation in the United States. He passed the Civil Rights Act of 1964, the Voting Rights Act of 1965, created Medicare and Medicaid, increased funding for education, and declared a “War on Poverty.” Historians rank him as an above-average president. The people, though, gave him two thumbs down. The NBA LBJ administration, on the other hand, hasn’t been an administration at all. It’s been more a reign, as LeBron James aka The King has ruled over The League….not one….not two…..not three….not four…..not five…..but 15 seasons. It should be 16, but many viewed him as #TheWashedKing last year as he missed many games due to injury. As his play this season has shown, LBJ didn’t go anywhere. He continues to dominate and reign over the NBA. Last night was but the latest example:

LeBron is the #12 player for fantasy on the season. He’s leading the freaking league in dimes with 10.8 per game. The usage rate is 32.4 and he’s taking 20.1 field goal atttempts per game. The 34.6 minutes per game seem like a lot, right? Well, that’s a career low!!! Which is a good thing because health and Father Time are the only things that will stop this reign.

Look up at LBJ’s line. Now look at AD’s. Now LBJ’s. AD’s. LBJ’s. AD’s. These guys are taking being on the same page too literally.

Continues to start, but since Avery Bradley returned from injury, his minutes the last three games have been 31, 30, and 27 minutes. Now, I initially thought that KCP would go back to the bench when Bradley returned, but Coach Vogel is no dummy. Could the switch happen at some point? Sure, but for now, KCP is going to get significant run as his defense has been solid, but the offensive upside is higher than Bradley’s. For fantasy, he’s a 3-and-D player and only viable for those in the deepest of leagues.

Played 26 minutes in his return from injury. Rondo’s range of outcomes is wide, as he could just as well mess around or drop a turd on any given night. He’s mainly a dimes and steals guy, but he boards well for a guard. The field goal percentage usually isn’t great, but he’s converting 47% of his shots from downtown!!! Crazy.

Over the last four games, Trae has been shooting 34% from the field. You have to embrace these days to experience the Trae Days. Do not fret, as the usage rate is still sky-high, and things should open up when John Collins returns to the mix.

Scroll up re-read the second sentence of the Rondo blurb. Replace Rondo’s with Gordon’s.

I’m naming my next kid Jonathan Isaac Son. I don’t care if it’s a boy or girl. I don’t care if my wife said no more kids. It’s happening. Isaac is a top 20 player for fantasy on the season. The floor is high due to his defensive contributions, but the offense comes and goes. If he gets consistent in that aspect of his game and continues to develop, are we looking at the next superstar in the league? Do I hyperbole much? Yes and yes.

Played 29 minutes in his first game back from injury. After watching Tesla sit on the Nikola throne, and Jokic trying to creep, Vucevic was itching to get back on the court to re-claim the throne and sit atop the Nikola pantheon once again.

Shit happens can have both a negative and positive connotation. Markelle Fultz is the starter for the Magic, so don’t jump up and down about this D. J. spinning the tunes last night.

Played 40 minutes and led the team in points. The Pelicans are third in offensive pace and 27th in defensive efficiency. Not good for real life, but a great environment for fantasy. On the season, Jrue is a top 40 player, but over the past seven games, he’s been taking a Holiday and been outside the top 100. The main culprit has been the 40% shooting from the line. How is that even possible? Anyways, he does contribute across the board and is even blocking close to 1 shot per game.

Got the start and played 20 minutes. Since he returned two games ago, he’s played 15 and 20 minutes. He should slowly get ramped up and be a nice contributor of boards and blocks. Hopefully he can stay healthy because the environment doesn’t get much better for fantasy production.

Only played 27 minutes due to foul trouble. Top 20 player for fantasy on the season. Everything I wished from Ingram has come to fruition. But I made those wishes when he was still a Laker. Regardless, it’s nice to see how much he’s blossomed. I love the increase in defensive stats, but I’m most impressed with the improvement in free throw shooting, from 67% to 83%.

Played 31 minutes off the bench. The second time scoring at least 20 points for Hart on the season, so points are not his forte, but he does access the ceiling once in a while. Hart is more about tres, boards, and steals. The field goal percentage isn’t great, though.

Got the start and played 29 minutes. The most minutes played since mid-November. Now, P. J. Washington did not play and the matchup with Domantas Sabonis and Myles Turner afforded Zeller more run, so this doesn’t seem to be the N. W. O. With that said, even in limited time, Zeller has been a decent producer of points, boards, and excellent field goal percentage.

Over the past four games, Rozier has been shooting 28% from the field. Twenty. Eight. He provides tres, dimes, and steals, but man….the tax rate is high.

When keeping it real goes wrong. Remember when I said that it’s cute that LeBron and AD are on the same page? Well, this is the opposite of cute. At least Graham contributes more in the counting stats than Rozier. Top 60 player on the season for fantasy.

Played 25 minutes off the bench. Monk normally gets fewer than 20 minutes of run per game, but the Hornets got buzzed in Indianapolis last night, 85-107.

In 21 minutes off the bench. The Pacers love him and, when he’s on the court, he sports a decent usage rate of 22-23. He’s the future, but the playing time won’t be there to be fantasy relevant. Only good when injury strikes or the opposition sucks like the Hornets.

The blocks have been the only consistent thing for Turner this year. As a result, he’s just outside the top 100 for fantasy. Was last night the genesis of a turnaround? Naw, the Hornets suck, especially against bigs.

Played 22 minutes off the bench. It’s only a matter of time before he starts getting full run. When that happens, points, boards, and defensive stats should be plentiful.

In 29 minutes off the bench. He had been struggling, as he was recovering from an injury, so it was good to see our BogBog bounce back. Points, tres, dimes, and steals are what he provides. The shooting efficiency will oscillate wildly at times, though.

Got the start and played 30 minutes, a season high. WCS is a good source of defensive stats, but the board numbers are so disappointing for a player of his height and athleticism. Regardless, I can’t trust anyone or anything regarding the Warriors. WCS will likely play around 23 minutes per game.

Got his first start and led the team in shot attempts and minutes with 35. Eric Paschall did not play due to a hip injury, so Lee will most likely be affected when Paschall returns.

Got the start at center and played 27 minutes because Joel Embiid did not play. Al is not sexy and always underappreciated, but you can count on him for top 30 production at season’s end.

In only 29 minutes, as the Sixers got their Declaration of Independence snatched from them by the Nets, 89-109. On the season, Simmons is a top 40 player, which is impressive considering the usage rate is under 20, he shoots sub-60% from the line, and doesn’t contribute tres.

Continues to ball the F out while Kyrie contemplates the the space/time continuum. Dinwiddie is a top 40 player when he starts, and a top 65 player when he comes off the bench. The usage rate is higher as a bench player, but he plays six fewer minutes. So, even when Kyrie returns, Dinwiddie will be a valuable fantasy player. Now, when both Kyrie AND Caris LeVert return, that could be an issue.

In 22 minutes off the bench. The Atkinson Diet has incorporated more of Allen lately, so Jordan is but a side dish now. With that said, Jordan has been productive in the 21 minutes he normally sees, so he could be an option if you need boards.

What if he isn’t a sell high?

He’s likely getting traded. And when he does, there’s no way he’s jacking up 14 shots per game. With that said, he’s on the Knicks, so would you be surprised if they gave him an extension?

Continues to start and played 24 minutes. If you need steals….like if you really, really, for really really need steals, then Ntilikina is an option, but just know that the gratuity is high.

Played 25 minutes and continues to come off the bench. Re-read the Marcus Morris Sr. blurb then come back. See what I mean?

Played 25 minutes off the bench. Elf is probably the best option at point guard for the Knicks, and I won’t be surprised if he messes around a few times soon. He does have 16 career trip-dubs. With that said, it’s the Knicks so…..

In 34 minutes, a season high. Coming into last night, Plumlee had played 13, 18, 15, 14, and 17 minutes. With Paul Millsap out, Jerami Grant go the start and played 27 minutes and Plumlee got more run. When he gets run, Plumlee can provide boards, some defensive stats, and is an excellent passer. The free throw shooting sucks, though.