If you go to Lawry’s and order the prime rib, there are five cuts to choose from: The California Cut (for lighter appetites), the English Cut (three thin slices), the Diamond Jim Brady Cut (an extra thick portion, bone in), the Beef Bowl Double Cut (celebratory Rose Bowl cut), and the Lawry Cut (the traditional and most popular). Because I’m a fat ass, it’s all about the Beef Bowl Double Cut, 22 ounces of heaven. 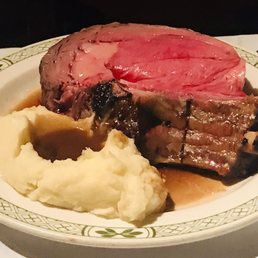 Heaven ain’t no place in the sky. It’s right down here on Earth….at Lawry’s. There are not many things better looking than that. But since we are fantasy nerds, seeing your player mess around and drop a triple-double in the stat box has got to be up there. Last night, Kyle Lowry expertly cooked the Triple-Double Cut:

Mmmm, mmmm, mmm. So delicious. Since returning from injury, Lowry has AVERAGED 38.6 minutes per game! For the season, he’s second with 37.3, right behind James Harden. That is great for fantasy, as the counting stats have been abundant: 2.3 trees, 5.8 boards, 8 dimes, and 1.4 steals. The shooting has been atrocious, though, as he’s been shooting 31% from the field. For the season, he’s at 40%. As a result, he’s putting up top 45 production and will likely finish in the top 35-40 range when all is said and done. Outside of the poor shooting, the other main concern is health. He’s already missed games this season and, with the elevated run per night, can he hold up for the entire season? If he can, there should be more cooking of the Triple-Double Cut this season, as Lowry has now messed around 15 times in his career. Beep. Boop. Bop. You know what never messes around? The Stocktonator.

The Force is strong with this one. Top 60 player for fantasy. Known as a defensive player, O. G. has been able to up his offensive game this season. The only thing he doesn’t do is dish out dimes.

Marc Gasol only played 8 minutes due to a hamstring injury. Chris Boucher could be a viable pickup, but he only played 6 minutes last night. The main beneficiary will be….

Played 31 minutes off the bench. Serge is not the Iblocka from his youth, but he will still get his Mutombo on. In addition, points, boards, some tres, and good percentages should be expected.

Got the start because Fred VanVleet could not go again and played 33 minutes, but unfortunately left in the fourth quarter due to a shoulder injury. If both VanVleet and Powell are out, then Patrick McCaw will be the next man up.

Another underwhelming game, but IDC, IDC, IDC! He got his block on!!!

We celebrate things that happen infrequently, like a birthday happens once a year. That’s about right for Blake blocking a shot.

The boards, steals, blocks, and field goal percentage are all elite. The bugaboos are no tres, poor free throw shooting, and high turnovers. Regardless, still a top 10 player.

In 25 minutes off the bench. Looks like a star in the making. For most of the season, he was only getting around 21 minutes of run per game. Over the past three games, that number has jumped up to 25. As a result, he’s been a top 50 player. Crazy. Clarke provides points, boards, blocks, and a tres here and there. The low turnovers and excellent percentages (64% from the field and 80% from the line) boost his overall value.

In 39 minutes. A great line, and one we all expect from Gilgeous-Alexander the Great. The matchup was ideal, though, so don’t take too much from last night’s game. I’ll get excited when he starts doing this against teams that slow it down and force him to utilize his entire repertoire.

Dennis is not always a menace. Sometimes he does plenty of good. Key word being sometimes. Dennis can break through the glass ceiling. Most of the time, though, he just gazes lovingly through it.

In 21 minutes. Slowly, but surely, like Atlas carrying the world on his back up the mountain, Favors is getting up to speed. The boards and blocks will be plentiful once he does. Shoot, they already are.

Ingram has to be the fantasy MVP so far, right? Maybe Devonte’ Graham is in the mix?

Got the start and played 24 minutes because Karl-Anthony Towns was out. Dieng it!!! Provides boards and blocks, but only viable when KAT sits.

Played 30 minutes but came off the bench. Word is that he was late to a team function, so nothing to worry about. There have been trade rumblings, though, so be aware of that. Treveon Graham got the start and played 22 minutes, but he will fade back into the shadows.

In 21 minutes off the bench. Jarrett Culver did not play due to illness, so Napier got some run. He’s someone to remember when injury strikes because he’s not shy about hucking and chucking.

In the battle of the Nikolas, the Nuggets made the Magic disappear, 113-104.

Played 33 minutes. It’s been three games since Vucevic returned from injury. He’s been a top 125 player over that span. Don’t worry. Just getting ramped back up and should return to providing top 20-ish value soon.

But he’s only 24 years old. What is the cutoff for when I can use his youth as a reason for optimism? 27?

This D. J. is still spinning the tunes….

Enjoy it while it lasts…because it’s not going to last.

Returned from injury and played 26 minutes. Millsap can provide across-the-board production. The issues are the minutes and playing time.

Aaaaaaaaaaaaalllllllllllllllmmmmmmmmmmmmooooooooooooooooosssssssssttttttttttt messed around. Such a Jokic that many were jumping off the train earlier. Over the past seven games, Jokic has been a top 15 player. He will likely end the season in the top 10.

Murray has 40-burger ceiling. He’s just so inconsistent. He provides everything but blocks, but the shooting efficiency is where the troubles lie. On the season, he’s converting 42% of his shots, but he goes through streaks where he shoots in the mid-30s.

Bam! Damn! Bam! Damn, Bam! I’ve liked Bam ever since I saw him Euro-stepping defenders in transition during the Summer League before his rookie season. I liked him coming into this season but…..

Top 10 player over the past seven games. The free throw shooting has been better, but it’s still sub-70%. He also doesn’t provide tres, but everything else?

Played 41 minutes. How much have I believed in Kendrick? Nunn. Do you think he will continue this heater? Nunn ya business. I kid. He’s been doing much of this while Goran Dragic has been out, but can’t deny what he’s been doing. Nunn has been providing points, tres, boards, dimes, and some steals. The shooting has been a respectable 45% from the field. When Dragic returns, the playing time will decrease some, but he should still get around 26-28 minutes of run per game.

Played 32 minutes off the bench, as the Heat only played eight players last night. When Justise Winslow and Dragic return, the playing time will likely go back to the low-to-mid 20s, but he’s carved out a niche to be fantasy viable. DJJ will primarily provide boards and defensive stats.

The freaking guy does it all. If he gets the steals up, Embiid will be a 1/1/1 member.

Played 37 minutes. My RichardSON is back!!! Since returning from the hamstring injury, last night was the first time getting over 30 minutes of run. Woo hoo! Now, he’s been underwhelming for fantasy, but should start picking it up and providing a little something something in every cat.

Rozier is the cute chick with flaws, like say an annoying laugh. Every once in a while, though, she shows us her tits, and we get sucked right back in.

In 29 minutes off the bench.

The Hornets are playing Showcase Showdown, with Marvin Williams being showcased. Will anyone bid?

Played 32 minutes. When the Cavs don’t get blown out, Love will play and produce. Which by my calculations will be 16.8 games. Owners of Love are hoping for a trade and to not get their hearts broken.

Cedi was kind of Osman last night. Well, that was his ceiling game so….not so Osman. Brent is thinking that Cedi will blossom into a star after the Cavs trade Love and others. I’m of the belief that he will continue being not-so-Osman.

In 37 minutes. Geez, I’ve written up three Cavs. My only thought is…..how bad are the Hornets? Thompson will provide boards, blocks, and dub-dub more than a few times. The field goal percentage is excellent as well, but the free throw shooting can be worse than awful. Over the past eight games, he’s converting 33% from the line on 2.3 attempts per game.

Another Cav. Man, now that Cedi line looks way worse than it was. Anyways, as for Sexton, he’s a score first, score second, and score third guard.

Top 35 player for fantasy. Tatum does it all, even provide defensive stats. His main issue is the the shooting efficiency, as he’s coverting 40% from the field. If he can improve in that area, you’re looking at a top 25 player.

Top 20 player for fantasy. Kemba is an excellent source of points and tres. In addition, he boards well for a guard and dishes out a handful of dimes. He gets his 211 on, but the most impressive aspect of his game is the 2.1 turnovers while garnering a 29 usage rate.

Brown has improved a lot, especially in the shooting percentages. The points, tres, and boards have all increased, primarily because he’s playing more. With that said, the dimes still remain low. Stop being so selfish!! As it stands, Brown is a top 50 player for fantasy. He will probably end up as a top 75 player, but let’s remember where he was coming from. The last three seasons, Brown finished as the 329th, 160th, and 187th player.

Played 21 minutes off the bench. With no Robert Williams, Kanter should get around 20 minutes of run per game. That’s nothing to call mom and yell yippeee about, but Kanter can still provide points and boards if those are what you need.

Played 38 minutes. Without Luka, Porzingis garnered a 29.1 usage rate last night. This is what he can do. When he and Luka figure out how to play with each other….ewwww, not like that pervert…..then this Mavs team is  going to much better than they already are. Scary thought.

Continues to start and played 31 minutes. An excellent source of dimes while Doncic is out.

Over the past eight games, Markkanen has been a top 25 player. Remember when he was shooting in the mid-30s from the field? I have a short term memory problem, so no. He’s been shooting 50% over the past eight games, so the pendulum has swung completely the other way. He will likely settle in the low-40s when it’s all said and done. Markkanen provides points, tres, boards, and a microscopic amount of defensive stats.

Got the start and played 37 minutes.

Top 10 player over the past 15 games. He’s AVERAGING 18.9 points, 4.7 tres, and 5.1 boards over that span. He’s even contributed some defensive stats. The shooting percentage will come down, but the floor is relatively high because he truly is an amazing shooter.

Russell is playing over 30 minutes and dishing out 6 dimes per game. But, but, but….he’s not contributing much of anything else outside of points and tres. The shooting efficiency has been a real issue, as he’s been converting 35% of this shots lately. Still loading…..

We are so close to a Mt. Whiteside eruption. I can feel it in my bones.

Let’s go to highlights of C. J. running circles around the Warriors….

McCollum is usually meh in a good way. Hmmm, can meh be used in a positive connotation? I will have to ponder that. Anyways, I say that he is meh because, while he produces, it never excites the loins. He does access the ceiling, though, more than a few times a year. Without fail. Every season.