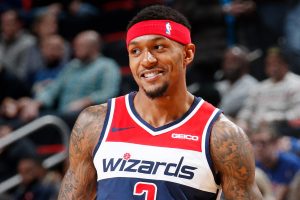 My buddy was talking about his girl a week or so ago and mentioned that he loved taking her out to eat now. She doesn’t eat sushi, which is healthy on the wallet. He no longer needs to take her to fancy steakhouses now because the last time he took her to one, she ordered her meat well done. “Woman,” he said, “if you want your meat cooked well done, I could’ve just taken you to Fatburger!” Meat should be cooked on the rare side so that it’s extra tender and juicy. Veal is no different. Beal on the other hand? Well done, all day and all night, especially when cooked into a 50-burger.

A career-high and the second 50-burger of Beal’s career!!! Mmmmmm, delicious! Beep. Boop. Bop. You know what provides deliciousness every day? The Stocktonator. Over the past four games, Beal has garnered a usage rate of 40% and averaged 34.8 points, 2.8 tres, 3.5 boards, 3.8 dimes, and 2 steals, while shooting 46% from the field and 85% from the line. He’s been a top 40 player. On the season, he’s averaging 6 dimes per game, which accounts for the lower overall value. When the dimes are getting cashed, Beal is a top 25 player for fantasy.

A career high for Channing’s brother from another mother! For the first two years of his career, JaySON was a top 60-ish player for fantasy. In his third year, he’s broken out to be a fringe top 10 player! The points, tres, boards, dimes, steals, and blocks have all improved every season. Man, the turnovers are low at 2.2 per game and the free throw shooting is excellent at 82%. The only bugaboo to his game is the field goal percentage, but even that 44% mark isn’t too shabby.

Smart continues to start for the injured Kemba Walker. The field goal percentage is usually ugly, but the contributions in tres, boards, dimes, and steals make up for it.

Brown had been outside the top 100 for the past month or so, but over the past three games, he’s been a top 60-ish player. The shooting efficiency has returned and he’s been getting his Mutombo on. 21.3 points, 3 tres, 5.7 boards, 1 dime, 1.7 steals, and 1 block over that span. The free throw shooting woes are back, though, as he’s been converting only 55% of the 3 attempts per game. I still don’t understand how a professional basketball player cannot make a free throw! Can someone explain that to me? Would it be akin to a doctor trying to collect blood and missing the vein with the needle? Because I don’t know many who miss.

The #2 player for fantasy on the season. On a per-game basis. He’s played 48 out of the possible 55 games this season. That ain’t bad, yo. KAT is the new AD! Whoever made the deal with the devil and had them swap bodies has my heartfelt thanks and appreciation.

Still leading the league in dimes. And still can’t shoot free throws. Seriously, I need answers people. I. Just. Don’t. Get. It. Anyways, LeBron is a top 20 player for fantasy. The free throw shooting and turnovers keep his overall value down.

No starter for the Spurs played more than 23 minutes. The bench had seven players who played double digit minutes. No blurbs for you!!!

Top 10 player over the past three games! Ha! Small sample size, but it’s something. The dimes have continued to be there for Adams all season long, but the steals, blocks, and free throw shooting have been exemplary lately. The free throw shooting won’t stay high for long, so expect regression in that department, but Adams looks rejuvenated after that awful start to the season. Points, boards, defensive stats, and excellent field goal percentage are what he offers.

Aaaaaaaaaaaaaaaaallmost messed around. Thanks for being so shitty, Spurs. Entering the season, many were clowing Paul as if he were Ru Paul, but the jokes on everyone that passed on him at draft time. The #11 player for fantasy on the season.

Oh, Shai. You are so damn Gilgeous-Alexander. He’s one of the better rebounding guards in the league and contributes in every category. Once he gets the dimes up, it’s game over, and the one who put the quarter up on the machine first gets to experience the fury next.

Yawn. Just another dub-dub for Domantas, his 44th on the season, which puts him one behind Giannis and Drummond for the league lead. Sabonis is a top 50-ish player for fantasy. In order to make that next leap, he needs to contribute the D and tres.

Got the start and played 32 minutes because Victor Oladipo was out due to back spasms. Holiday can provide tres dimes, and steals, but the shooting efficiency isn’t great. He may get more run even when Oladipo returns because Jeremy Lamb limped off the court and will get an MRI on his knee.

In 27 minutes off the bench. If the Lamb injury is serious, both Holidays could see an increase in playing time. Justin is a 3-and-D player who also has shooting efficiency problems. It runs in the family?

Continues to start with Gasol still out with the hamstring injury. Points, tres, boards, and blocks. Unfortunately, we no longer are blessed with Iblocka, but at least we get enough to reminisce and get that tingly feeling inside again.

Dayam. That’s a freaking line. The coke snorters of the world all just collectively flailed their arms into the air. My bad, coke heads. That’s a freaking fantasy line, but it’s not an outlier. Over the past 12 games, Lowry has averaged 17.8 points, 2.6 tres, 5.7 boards, 8.3 dimes, 1.8 steals, and 0.4 blocks. Good enough to be a top 15 player for fantasy.

In 17 minutes off the bench. In garbage time. He averages around 13 minutes per game, so…..he chills with his brother Bobby on the bench and fills the water cups.

Continues to start and played 27 minutes. Smith isn’t sexy, but he’s been a top 70 player over the past four games, contributing tres, boards, dimes, and steals. The points won’t be there playing alongside Beal, but multi-cat production should be expected. The most important development has been Shabazz Napier not being much of a factor anymore, as he played 17 minutes last night.

Bertans is 8th in tres attempts and 6th in tres makes. He also grabs some boards and contributes in both the steal and block categories. As a result, he’s a top 50-ish player for fantasy.

Continues to be Forever Young and ball the F out. Top 15 player over the past four games. 17 points, 3 tres, 6.8 boards, 3 steals, and 1.3 blocks! Will be viable until Lauri Markkanen returns.

Played 39 minutes. The minutes fluctuate, so we are at the mercy of Boylen. What a scary thought. Anyways, Sato is a tres, dimes, and steals player aaaaaaaaaaaaaaaand……he’s going to mess around soon. I can feel it in my bones!

In 34 minutes off the bench. With the injuries, White has been playing over 30 minutes per game. The usage rate has also ticked up from 23 to close to 30. It’s all about the shooting efficiency for White. He can just as easily shoot 30% from the field or close to 50%. When he’s hot, he accesses ceiling games like last night. Don’t expect that on the regular though.

If Julius Randle is a bull in a china shop, then Zion is a herd of wilderbeest. With that said, Zion is primarily a points, boards, and excellent field goal percentage player for fantasy. He’s barely a top 200 player on the season. The free throw shooting is going to be poor and the tres will be non-existent, but the defensive stats should come, which will boost his overall value.

At least the eldest Holiday doesn’t have shooting efficiency issues. Why he no teach the young ones? Holiday is a top 40 player for fantasy. The only numbers that are different from his top 20 seasons have been the decrease in dimes and shooting percentages. Everything else is the same.

There’s the Wiggins I know and hate. With that said, I have been impressed with Wiggins as a Warrior, especially in the defensive department. The offensive system and coaching will also likely do wonders for his game. I’m very curious to see how this shakes out, but Wiggins has a chance to be a 1/1/1 player and finish within the top 100 for the first time in his career.

In 28 minutes off the bench. His teammates have been raving about him and the coaching staff has taken notice as well. He’s played 28 and 25 minutes the past two games and provided across-the-board contributions.

In 32 minutes off the bench. Will be Bye Bowman when Steph Curry returns to action.

He’s starting, playing a ton of minutes, and jacking up double-digit shots per game. Points, tres, steals, with some boards and dimes are on the menu. Now, the shooting efficiency isn’t great, as he’s shooting 41% from the field on the season and sometimes dips into the 30s, but he’s on the court and has the trust of the coaches.

Draymond Green did not play due to a pelvic contusion, while Marquese Chriss did not play because of a calf injury. As a result, Eric Paschall started, played 31 minutes, and contributed 13 points, 5 boards, and 1 steal.

Got his second start of the season because D’Angelo Russell did not play due to resting on a back-to-back. In two starts, McLaughlin has averaged 35.4 minutes, 19.5 points, 2 tres, 4 boards, 10.5 dimes, and 0.5 steals. He’s shot 66% on 12 attempts from the field and hasn’t missed a free throw.

Got the start but only played 22 minutes due to foul trouble. It ain’t hard to tell that Naz is good. The only question is how much will he play going forward, as much of that is dependent on the health of Karl-Anthony Towns.

In 27 minutes off the bench. The shooting efficiency has been piss poor since arriving in Minnesota, but he’s contributing across the board like in his younger days. Top 90 player over the past four games.

Since returning from injury, Millsap has played 18, 19, 20, 27, and 26 minutes. It looks like he will settle into the mid-20 minute range. Now, he’s not going to shooting 81% from the field every night, but he does contribute across the board on most occasions. Top 45 player over the past five games.

The #1 player in fantasy over the past 13 games. On the season, he’s #9. He will probably settle in the 5-7 range me thinks. Such a Jokic how good he is at basketball.

In 31 minutes off the bench. With Malik Beasley out of town, Morris is the guy off the bench. He’s usually not a scorer per se, providing mostly dimes and steals, but keep an eye if the shot attempts average over 10 per game.

In 10 minutes off the bench. He’s still not 100% healthy from the ankle injury and Malone was questioning some of his shot selection. When the Nuggets are healthy, I don’t see MPJ getting more than 20 minutes of run per game, if that. The lack of defense will probably hinder his playing time as well. With that said, he is a very skilled offensive player so he could ball his way into playing time. There’s ceiling there for sure. I just don’t view it as the probable outcome.

In 31 minutes off the bench. He’s not starting, but whatever. He’s playing 30 minutes a game, and that’s all that matters. Is it a surprise that a Christian Wood rose on a Sunday? Top 40 player for fantasy.

In 20 minutes off the bench. What the flying f#@! is Dwayne Casey doing?

In 33 minutes off the bench. Brown is the main guy off the bench. Well, technically Wood is but he should be a starter. Whatever. Brown is playing over 30 minutes and will provide boards, dimes, and steals.

I was beginning to think that the Melo was going to have to be thrown into the trash, but it looks like the Melo is still jiggling. Points, tres, and boards.