We are only seven games into the season and already two of the most promising young players in the league have been suspended. DeAndre Ayton and John Collins both received a 25 game suspension due to violations of the NBA’s Anti-Drug program and, although they will appeal the decision, chances are they will have to sit out the entirety of those 25 games.

I will not voice my personal opinion as we rarely get to know the full story but in both cases it’s a huge blow for their respective teams, but simultaneously, more opportunity for other players to contribute in fantasy and real life.

What’s up fellow Razzball readers and fantasy basketball enthusiasts! After recharging our batteries over the summer, it’s time to start preparing for the upcoming NBA season. These can range from checking the names of the players from this year’s draft and/or casually checking all the offseason transactions, which can escalate to frantically searching for recorded games of Limoges to scouting the strengths and weaknesses of Sekou Doumbouya’s fantasy game. It’s all about how each and everyone enjoys the fantasy basketball game.

Now, I have to admit I can relate more to the latter example and, as such, I am preparing my top 155 projections for roto leagues, which will be published in the upcoming weeks and mark my third straight year on this fine site.

Last year, I decided to grade my projections from the year before, in an attempt to judge myself and try and make them more accurate in the future. Go me, for hating myself I guess, but it’s a fun little project before I dive into the actual projections every summer. If you are curious and ready for some math, check last year’s article for a full explanation on the method used. If you prefer the “too long, didn’t read” approach, know that the main metric is the difference between the projected and the actual overall per game value for each player. 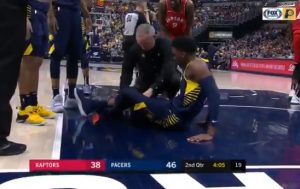 Victor Oladipo missed 11 games due to a right knee injury two months ago. Since returning from that injury, he’s been a top 65 player (19 games), averaging 17.3 points, 1.9 threeecolas, 4.9 boards, 5.8 dimes, 1.8 steals, and 0.2 blocks. The shooting efficiency was a putrid 40%. A far cry from the 47% efficiency and top 10 production from last season. His owners were not happy. Our very own “I Just Wanna Kawhi” couldn’t take it anymore and shipped him away last week. I need to hit him up for the upcoming Powerball numbers because his owners will no longer have to worry due to the injury Oladipo suffered yesterday. Defending a full court pass, Oladipo jumped and his knee gave out, the same knee that caused him to miss those 11 games. The trainers draped a towel over his leg and he was taken to the locker room via stretcher. Prayers up for Oladipo and his family. Since this is a fantasy website, we need to discuss who replaces him and how it affects the Pacers rotations. The most obvious replacement is Tyreke Evans, who was scooped right away in a few of the RCLs I’m in. Y’all are too sharp and fast on the draw. In 715 minutes without Oladipo on the floor, Evans has a 29.3% usage rate and produces 1.05 fantasy points per minute. The player that saw the biggest increase in usage with Oladipo off the floor, though, was Bojan Bogdanovic, with an increase of 2.1% to a 23.2% usage rate. Domantas Sabonis is the Pacer that scores the most fantasy points per minute at 1.39 with Oladipo off the floor. If you want to do a little speculating, Aaron Holiday could be a nice pickup. He’s played 275 minutes without Oladipo on the court and has garnered a 24.1% usage rate and scored 1.06 fantasy points per minute. Granted, most of that run came earlier in the year, as he hasn’t received 10 minutes of run in any game this month, but someone to keep an eye on. Anyways, hate to see injuries and let’s all send good vibes towards the Oladipo family. Oladipo Ho! Oladipo Ho! Oladipo Ho!

I know people are supposed to learn from their mistakes, reflect on past decisions, and try to improve. Remember last year, when Jahlil Okafor was traded to the Brooklyn Nets and I was quick to label him “must-own” and feature him as the main Buy suggestion? I hope you don’t, as we all know how that worked out. I hope I’m not replicating the same mistake by suggesting him again today, due to Antony Davis’ latest injury. More discussion on him coming up on him on his respective blurb. I just hope that with this introduction I can finally combat my Achilles heel, my kryptonite, this man right here… 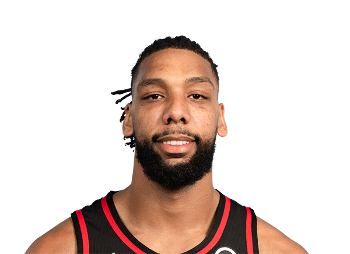 Taking a look at last week’s suggestions, Victor Oladipo is gaining some momentum again after a 21 point performance, but the buy-low window is still there. Alec Burks and Richaun Holmes were not helpful for different reasons, as the former flat out underperformed while the latter got injured. Finally, Donovan Mitchell continued his scoring tear, but Ricky Rubio has returned so this might be the last chance to sell really high on him. Special shout-out to Corey Brewer who played a team-high 32 minutes against the Rockets and did everything in his power to annoy James Harden with his “unorthodox” defense… 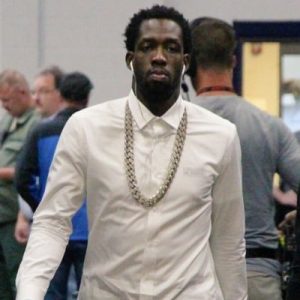 If your fantasy team had the misfortune of facing James Harden this week, my condolences. Thoughts and prayers go out to you and you family. You ran into the buzzsaw. I would know, I was one of them. Last night Harden went 8-48-8-6-4-1-6 on 14-of-30 shooting and 12-of-15 from the line in his worst scoring performance of the week. In three games this past week, he went 19-163-27-14-7-3-15. To be fair, there were two overtime games so his numbers got a slight boost, but this is probably the greatest three-game scoring performance in recent memory. RIP to my fantasy team. On a lighter note, here’s what else went down in the NBA last night: