I can not wait for the Cleveland Lebrons to start the season. There is going to be so much pettiness, so much drama, so much F U-ness, and….so many wins. The Lebrons went 35-47 his rookie year. The next year they improved to 42-40. Those were the only years the Lebrons did not make the playoffs. Including those two years, the Lebrons went 349-225 (61% win percentage) with two 60+ win seasons and two 50 win seasons. Then, the Decision happened. The Cavaliers proceeded to go 97-215 (31% win percentage) with only one season above 30 wins. When Lebron returned, 161-85 (65% win percentage) with three seasons above 50 wins and the team’s first NBA Championship. I truly believe that this is Lebron’s last season in Cleveland. Remember this? I remember Lebron saying, “Even my wife was like, my momma and my wife was like, ‘I’m not with that.’ My mom was definitely like, ‘[expletive] that, we ain’t going back.“As I said on the pod, the only way Lebron returns to Cleveland is if Dan Gilbert sells him the team. As a result, he’s going balls to the wall this season. That Brooklyn pick? Lebron is going to use that to get someone. He’s pushing all the chips into the middle of the table to make one final last run. Even if management doesn’t sign off trading the pick, Lebron will morph into Kayser Soze….

…comin’ for to carry me OUT of my fantasy playoffs!  Brutal news yesterday that Kyle Lowry has to undergo surgery on his right wrist – his shooting wrist – to remove some loose bodies.  Should’ve kept those bodies in a well, like Buffalo Bill!  “It puts the lotion on the skin!”  Without an IL spot, you’re cutting him in your redraft leagues, even with the prospect he gets a couple games in right before the playoffs.  The timeline is “hopeful to return in 4-5 weeks”, which would put us in early April.  Plus he’s a shooter, and gonna have a rusty wrist.  Hah, that sounds like a sex thing…  Moving on!

In his place, it’s time for the Cojo mojo!  11/1/6/3/0 then 14/1/6/1/0 over the weekend for Cory Joseph, with only 2 combined TO, showing what kind of sexy roto-asset he could be.  But thennnnn, struggled last night – as did the Raps as a while – to knock off the Poppycockers in a 1-point win, going 6/3/4/2/0 with 2 TO.  Still got 33:30 minutes, but he’s more in the fringy starting PG class (your Brogdon, McConnell, et ceteras) than in the most-own zone.  You could say he’s in the friendzone.  Although dudes don’t really have a friendzone, it’s only chicks that apply that logic.  The friendzone is a very sexist area!  After this dunk in the 2014 Western Conference Finals (back when he was on my REL team), Cojo could have his way with me any time he wanted!

Here’s what else went down last night in fantasy basketball action:

I was incredibly lazy with the title today, but honestly, no performances stuck out to me last night. Westbrook and Harden did their thing, but they basically hit their averages.  The Cavaliers were completely gassed heading into OKC.  The Mavs beat the Jazz in OT, but come on, Dallas isn’t exactly relevant at the moment… The wunderkind Yogi Ferrell, didn’t exactly make a huge splash this game either.  Overall, it was a pretty chill night in the association.  That being said, let’s have some notes!

Happy 2017 to everyone!  Hopefully, you all had a good holiday break and enjoyed a great slate of games.  As for this segment, it’s a new year but it’s somewhat of the same old.  We continue where we left off.  In the last installment, we took a look at the best teams to target for marksmen shooting guards.  Let’s hop on over to a very similar and often tagged with the same position eligibility–the SF or the wingmen.  Small forwards tend to be the defender against the opposing teams best back court player during key parts of a game.  Think Kawhi Leonard and Lebron James.  For most of us, the term wingman has a very different meaning but whether it’s used for social events or basketball, they tend to have the backs of their teammate(s).

So I’m not a basketball historian, and I’m still a young pup. I barely remember the Bulls glory years – I was in elementary school when they won titles 4-6 (yikes, aging the crap outta myself), but I do vividly remember the Byron Russell push-off and I cherished my Michael Jordan cards. I still have a bunch of em! This one is still in a nice case and one of my favorites… Anyway, when I saw Jimmy Butler go off for 52/12/6/3/1 last night, I was about to make all sorts of tongue-and-cheek MJ parallels…

Got the same reverse layup and everything! But then it dawned on me… Butler is more like Scottie Pippen if there was no Jordan. Pippen’s best season was 93-94, unsurprisingly the year without MJ, and went 22.0/8.7/5.6/2.9/0.8 on 49% shooting with 0.9 treys. So far this year, J Buckets is 25.3/6.8/4.4/1.7/0.3 on 46% shooting with 1.1 treys. While Pippen was obviously one of the best defensive players of his generation, Butler is a much better FT shooter and gets to the line more. But the rest is really close, and I thought kinda interesting food for thought. So the answer for the Bulls is simple – find a Michael Jordan for Buckets to play next to! I’m a problem-solver – if only every team’s issue in the NBA was this easy! Hah! Here’s what else went down last night in fantasy basketball action: 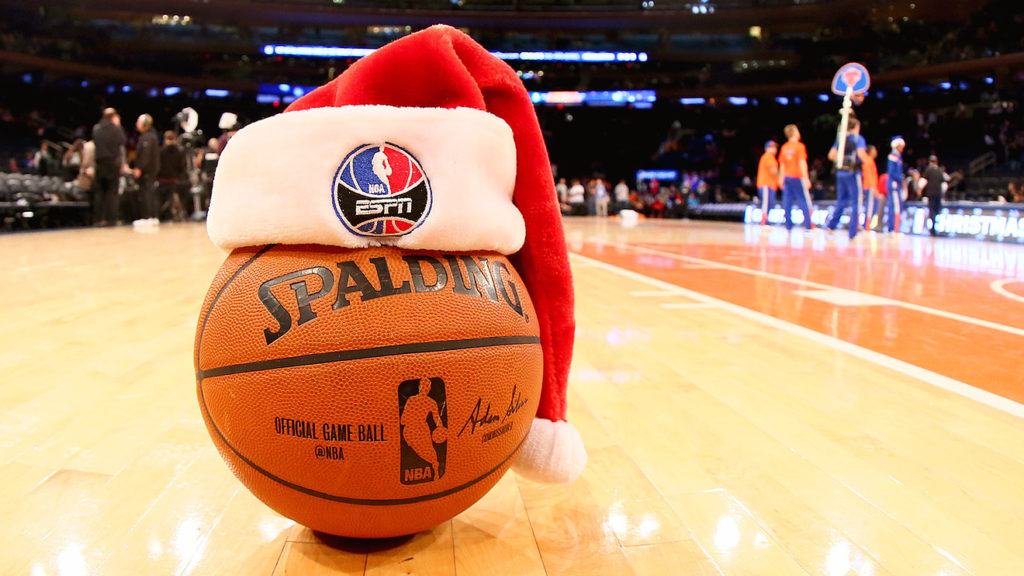 Happy Belated Holidays everyone!  Not a lot has changed on the waiver wire this week, but here is the updated list, and I’d love to answer your pickup/drop questions below!  Just for the record, the Xmas day games were fabulous this year, and the Richard Jefferson poster made my day.  Ok, without further ado, the updated waiver pickups for the week!

Whether you celebrate Christmas or not, Christmas Day is a great day for basketball fans. With the exception of the shortened 1998 lockout season, games have been played on Christmas Day every year since 1947 and often feature the best of the best. And this year was no exception.

We saw a rematch of the NBA Finals, a battle for Los Angeles, and a matchup of exciting young players between Minnesota and OKC. 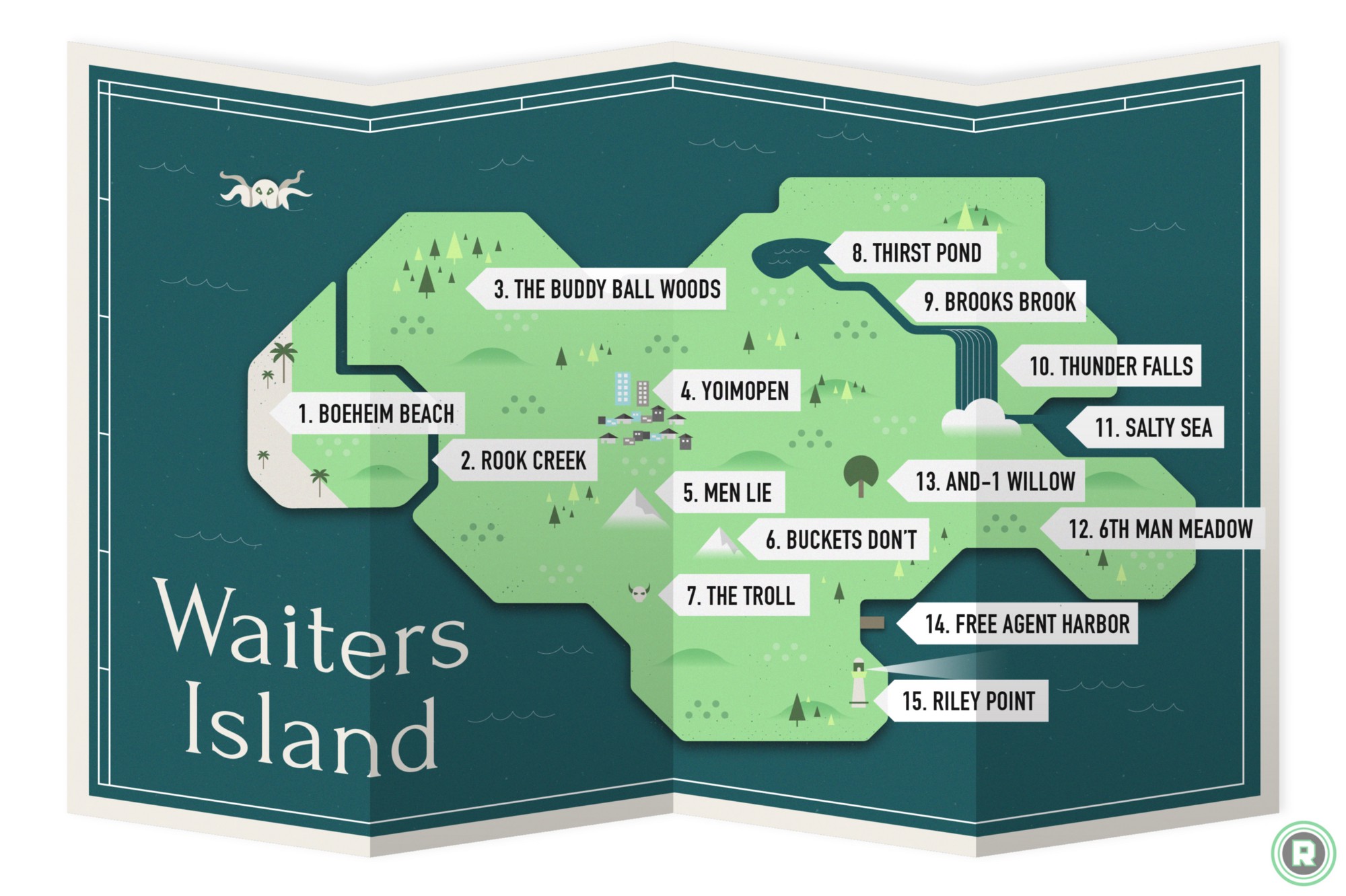 I remember last summer hearing Zach Lowe of ESPN talk about Dion Waiters like he was the missing ingredient in making a delectable dish, like the blueberries needed in blueberry cobbler. Ok, not the blueberry, but making the baking powder? ‘Waiters Island’ was the term, and he was fully on board.

I thought he was crazy. And I love what Zach Lowe does.

Fast forward to the 2016-2017 season and Waiters was essentially an afterthought as he joined his new team in South Beach. I won’t say that he took his talents there, like the rest of the world has at some point, but let’s not forget that this guy was the 4th overall pick in the NBA Draft; dude can hoop. His ‘hero ball’ mentality and lack of interest in playing defense, you know, half of the entire game, makes him hard to watch sometimes, and is a large reason why he’s now on his third team in six years. That’s a rare feat for a #4 pick that’s averaging 12.9/2.6/2.5 for his career. We’re not talking Chris Paul here, but we’re also not talking Marcus Fizer. Yet he seems to be settling in nicely for the Miami Rileys.

And now he gets four games this week…but let’s be clear, with the way he’s playing he deserves more than just a streamer nod. This dude should be owned at a much higher rate than 34%. GO GET HIM!

Coming off of Cleveland’s championship, LeBron James has led the Cavaliers to a 9-1 start. It looks like there hasn’t been a championship lay-off at all. James finished one rebound shy of a triple-double with 28 points, 14 assists, 9 rebounds. He’s off to an incredible start. He may be rested down the stretch, if the Cavs continue their winning ways, but for now enjoy the ride.

It was a short slate of games on Tuesday so let’s get right to it: