The Wicked Witch from the West, Phil Jackson, is gone! Oompa loompa doompety doo! The one thing that he did well was to draft Kristaps Porzingis with the fourth overall pick in the 2015 NBA Draft. Of course, the Knicks figured out a way to make KP a spot up, three-point shooter. Such a Knicks thing to do. Anyways, he gave Joakim Noah a four-year, $72 million contract and re-upped Melo for five years, $124 million, with a no-trade clause. Brilliant! Let’s not forget about trading away Tim Hardaway Jr. to the Hawks, which the new regime just re-acquired for four years, $71 million. He also signed Derrick Fisher and Kurt Rambis to be head coaches. Someone explain to me why Rambis has been a head coach in the NBA for three different teams? His career win percentage wouldn’t even make him a good baseball player. He must suck….I better stop there. It is said that the success of an organization always start at the top. Well, James Dolan is the man up top and his team is #1 on Forbes’ team value list. Grandmaster Flash knew what was up….

Your left eyebrow is connected to the…  right eyebrow!

Damn, teams who took the plunge and drafted Anthony Davis are getting rewarded for their brazenness, that’s for sure!  My only RCL team left standing is my Brow squad, and I actually somehow think it’s the first time I’ve ever owned Brow…  Maybe I had a share or two his rookie year, but despite always championing him, never got him anywhere with early picks.  Anywho, monster 36/17/3/3/3 line for a 1.5 rainbow, giving him 3 straight 30/15 games.  Who wants a unibrow ride?!  They should totally make a “Unibrow Ride, $0.25” shirt.  Screw that, I’m gonna!  Razzball store, it’s time for me to make some new products! 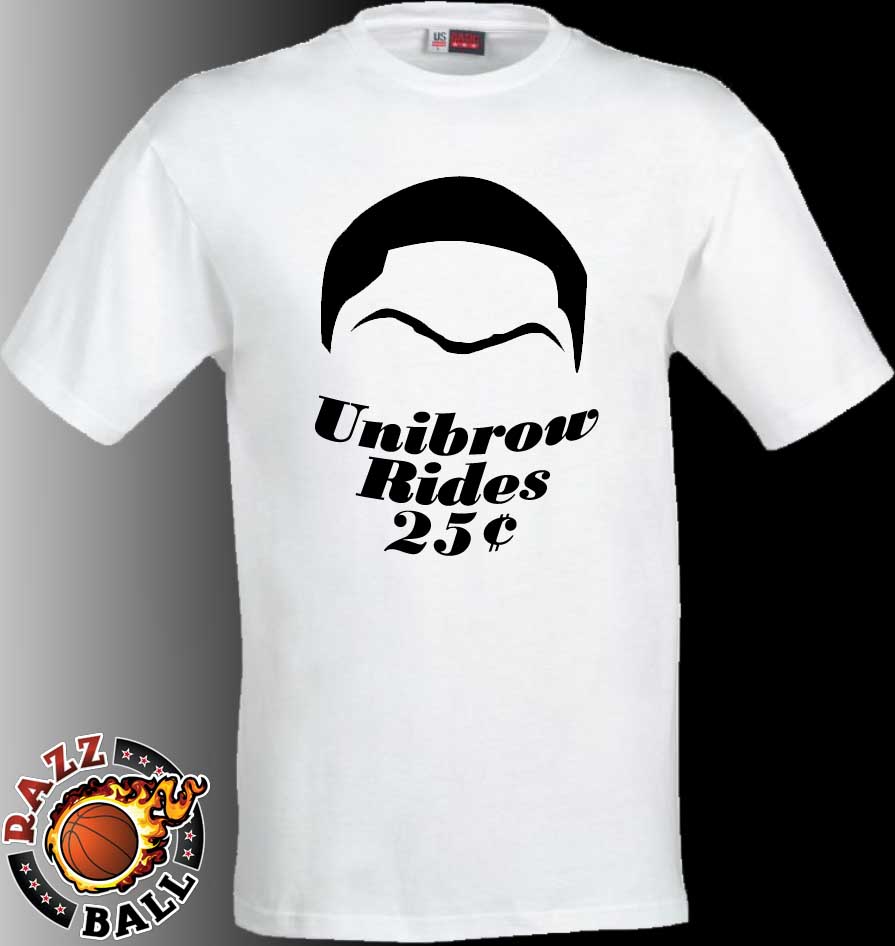 Who’s with me and wants to buy those?!  Let’s launch a kickstrarter!  Here’s what else went down last night in fantasy basketball action:

Ah, the fountain of youth. Something Arizona certainly doesn’t have! The retirement haven of America – just ask Tyson Chandler – oddly boasts the most ridiculously young team. Last Thursday, they had a younger starting 5 than all but 1 of the 8 college teams playing in the Sweet Sixteen that night, and not surprisingly, the youngest starting 5 in NBA history. The retirees in Phoenix love to watch em young!

Despite being a god awful team, there still is a lot of promise with the draft picks they made, highlighted by the absolute insanity that Devin Booker dropped 70 points on the Celtics last Friday night. Insanity that he was the youngest player to break 70, that he set a franchise record, OR THAT THE SUNS STILL LOST?! Hah, take your pick.

On that layup there to kick off the GIF, Marcus Smart is like, “meh, whatever, we up 20.” 21-40 FG (4-11 3PTM 24-26 FT) for 70/8/6/3/1 in the craziest line of the year. I mentioned on our last Pod that the Suns are kinda like random number generators right now, so who knows what you’ll get next?! Well, next was 23/4/5/0/1 with 4 TO in a blah encore for Dbook. His shooting arm was tired! He did get another 7-7 FT yesterday though against the Hornets (nice to see the volume staying high), but they yet again lost, and he’s doing this without Eric Bledsoe, instead with a group of similarly young pups. It might vault him to be drafted a little too high for my liking for next year, but maybe he can turn into DeMar DeRozan with 3s. Which hurts the FG%, but I’m all optimism right now! “Never Seen So Many Guys Happy After An L!” huh?! Well, Jae Crowder – aka Party Pooper – it’s the end of March and I’m in super depressed mode after I had 3 of my 4 alive teams lose in semis this week! Why you gotta harsh my buzz!  Here’s what else went down in fantasy basketball action over the weekend:

Ya know, playing a typical “bad” team can help cure all ills, but then there’s playing a New York team that goes full Poppycock… To kick off MLK day, the Knicks continued their epic collapse, by being forced to start doofy Ron Baker and Mind Games Koozie Mints. I’m kinda guessing at that second guy, I don’t know why Razzball isn’t linking to his name though! It’s about right! Baker got 22 minutes of 12/3/1/2/0 and was OK, and I guess Mindaugas Kuzminskas was OK too for 14/5/2/2/0 in 38 minutes, and well, the Hawks only beat this make-shift roster by 1, so there’s that! But the big thing to watch in this game (for me) was Dennis Schroder, who is off two horrid games where he got out-minutesed by Malcolm Delaney. Fortunately Das German broke out of his funk, and went 28/3/3 on a mad hot 13-16 shooting with a trey.

The trey being the game winner! Still got 2 TO and no D stats, but hey, at least he kept another split-PG situation from developing. Already have seen to much of that in the NBA! It was an action-packed, holiday-filled day of basketball last night, so let’s daily notes it up!

A lot of people were mad at 2016. Thought it was a year without morality. Without decency. Without justice… So I’m watching the Thunder/Hornets last night, and in the 3rd quarter, Dell Curry is like, “I just had some terrible news cross my desk – Justise Winslow is going to be out for the year.” Whoa, way to be a news breaker, Dell! He also broke the news that his wife was in the crowd and circled her on the teleprompter when the camera showed her, so there’s that… Awk-ward! Anyway, Winslow’s injured shoulder ended up being a labrum tear, after it was reported it was only a tweak and he didn’t anticipate it being a long-term issue. Doctor G, how come major tears only feel like tweaks sometimes?! He’s going to have corrective surgery today and will likely miss the rest of the season, ya know, unless the Heat make the playoffs! Hahahahaha, sorry Slim, had to do it… This is definitely a bummer, because we saw this with Michael Kidd-Gilchrist and he ended up tearing it a second time after only a few games back, so I’m going to be very leery about ranking Winslow decently next year. Well, the injury, and the fact he’s going to end the year shooting 35.4% from the field. Yeesh. So with Miami lacking any Justise, it would appear James Johnson is going to get all the minutes he can handle, and is must own for me ROS. Really everywhere. I raved about him as the lead to the notes earlier in the week, Adam led with him for RazzWired, and he shouldn’t have any issue getting 30ish MPG the rest of the way. I was initially surprised to only see 25 minutes last night in a 5-point win, but yeah, he fouled out (game was on too late for grandpa JB!). 14/6/6/0/3 for JJ on an awesomely efficient night, shooting 4-8 FG, knocking down 2 treys, and hitting 4-4 FT. Only black eye was the 3 TO, which look like will be an issue for him as he takes on a big role on the offense. So be sure Johnson is owned in all your leagues, and hopefully by the 17-18 season, we’ll see a return of Justise in the world! Here’s what else went down last night in fantasy basketball action:

Derek Fisher’s Mind – he really thinks he can play again?!

“They’re saying us and Golden State are the super teams…”  WHO?!??!  Hilarious.

Despite that kind of absolute lunacy, the Knicks did vastly improve.  While the Knicks weren’t necessarily “bad” on defense, they add Lee and Noah to bolster the holes Melo and Rose pose on the defensive end.  And not like they need another scorer with Rose and Melo…  With all these one-syllable names for their starters, we have to just call Porzingis “Goose”!  Rose, Lee, Melo (I guess that’s two syllables, dammit!), Goose, and Noah (dammit that’s two again!).  This super intro is going nowhere.  Here’s how the Knicks have assembled their super team: