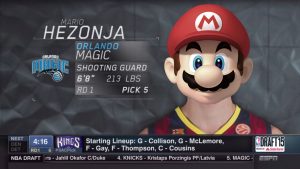 I’ve always been infatuated with the “zone,” that state of consciousness when one has Neo’d the Matrix. Mental steroids and practice can induce it, but often it’s a state that transcends reality. Life progresses frame by frame, as if someone pressed the slow motion button on the VCR. My fault, I mean DVR. In the real world, a shooter believes that every shot will go in, while understanding that it’s a mathematical impossibility. In the “zone,” screw math. Everyone morphs into a video game Dion Waiters on rookie mode. Well, last night, Mario Hezonja of the Orlando Magic gobbled the mushroom, morphed into Super Mario, and entered the “zone.”

Now, Aaron Gordon and Evan Fournier did not play yesterday, so Mario was afforded an opportunity to showcase. When those two return, Super Mario will shrink back to the bench. Just file it away for the future that Mario has the ability to enter the “zone” when called upon.

Vuc has double-dubbed in six straight games, with one of those being a triple-dub. During that stretch, he’s posted at least one assist, steal, block, and made at least one three-pointer in five of the games. Vuc has definitely been in the “zone.” Magic mushrooms? I think Rudy and the Stocktonator have been in the “zone” as well. They had Vuc as the number two play yesterday.

Simmons continues to thrive in the starting role. The Juice is Loose!!! As long as he’s not driving a white Ford Bronco, we should be good.

Returned to action and played 17 minutes. I’m not a big Isaac guy, as I think he’s too raw. With that said, he does have potential, especially on the defensive end.

Reggie Bullock got the start at small forward and played 31 minutes.

I think SVG thinks Reggie’s name is Bollocks because a Johnson needs them to be a productive member.

With Avery Bradley out, Luke Kennard got the start and played 15 minutes.

I didn’t think it would be worth it to give him a stat line, but it’s the holiday season and I ain’t no Scrooge.

Played 24 minutes and could get the occasional start, depending on the matchup. I’ll believe it when I see it, but if you need a big man that shoots 3s, then Tolliver could be of service.

It was a good day for the Stocktonator as well. Had LeBron as the number one play yesterday.

Played 29 minutes. Is he as real as Bitcoin? Do we need to call him CM Green? Cash Money Green? He’s been getting consistent minutes in the mid-20s and can score and grab a few boards.

Tristan Thompson played 15 minutes. He should slowly start getting ramped up to play in the 20s, so if you need boards and a connection to a Kardashian, then Tristan’s your guy.

Played 32 minutes, which is two more than the prior game, and four more than the game before that. Two, four, six, eight! Who do we appreciate? Wall! Wall! Sounds a little too much like a Trump rally. My apologies.

Great Scott! Mike has been en fuego lately. He’s shot 8-for-14, 9-for-10, 4-for-7, 4-for-7, and 9-for-11 his last five games. He’s also grabbed some boards and liberated a few. Now, he did play 33 minutes, but some of the increase was due to an injury to Markieff Morris. This is probably just a hot streak, but keep an eye on his minutes and production, like “a gazelle drinking from a watering hole looking for predators” kind of eye.

Only played 16 minutes. When he plays, he’s productive but his minutes are all over the place. One game he’ll get 16, while the very next night he will get 30. Lance is valuable to those that are Born Ready.

Played 30 minutes off the bench. If you thought Lance was volatile, then you’d need Life Alert for Joseph. The game before yesterday, Joseph played 25 minutes and shot 0-for-5.

Jahlil Okafor did not play. It’s been mentioned that the pace is too fast for Okafor and that he needs to get in shape. Isn’t that like a prerequisite for being a professional athlete? Like if I was an accountant, it’d be weird if I didn’t know how to add, right? Anyways, I do think he will get incorporated into the mix, but it may take some time for that to happen. In the meantime, Tyler Zeller played 21 minutes and Jarrett Allen played 17 minutes at center for the Nets.

It was not a good shooting night for many of the Nets. DeMarre Carroll shot 1-for-6, Rondae Hollis-Jefferson shot 2-for-10, and Spencer Dinwiddie shot 1-for-6.

Played 29 minutes. Crabbe gets minutes and shoots 3s, but many owners have been frustrated with his performance. I’d recommend that you go to the local Asian grocery market and free one of the crabs in the bin a day.

After an impressive Brooklyn debut, Stauskas played 15 minutes, which was probably 15 too many. Nik, an encore is not supposed to be the exact opposite of the good thing you did in the debut.

Played 23 minutes. Why did I mention Acy? Why did I mention the whole Nets team? Because I’m currently at my in-laws in Brooklyn, so maybe out of respect. Maybe there’s some BK vibe that permeated into my brain. Whatever it is, being on the Wrong Coast has discombobulated me.

Willie Cauley-Stein got the start at center and played 33 minutes.

Free Willie! Why he doesn’t start and play 30 minutes a game is beyond me. Oh, it’s the Kings.

Vince Carter got the start and played 25 minutes. Ok, Kings. That was pretty cool, as the game was in Toronto.

Bogdan has played 29, 33, 33, and 30 minutes the past four games. It’s happening! Bogdan can shoot from downtown, grab boards, dish out dimes, and liberate. Let me see. Bogdan is Serbian. Vlade Divac is Serbian. Hmmmmmmmm.

Got the start at power forward, as Serge Ibaka was out, and played 29 minute. Such a versatile player. I think he’s going to be a good one. How could he not when his name sounds like Obi-Wan Kenobi.

Since I crapped on him last week, JV has posted three double-dubs in four games. Good job, Son! Pascal Siakam and Jakob Poeltl played 19 and 21 minutes respectively, so his job looks to be secure. With that said, be wary of matchups against teams that go small or have big men that can shoot from downtown.