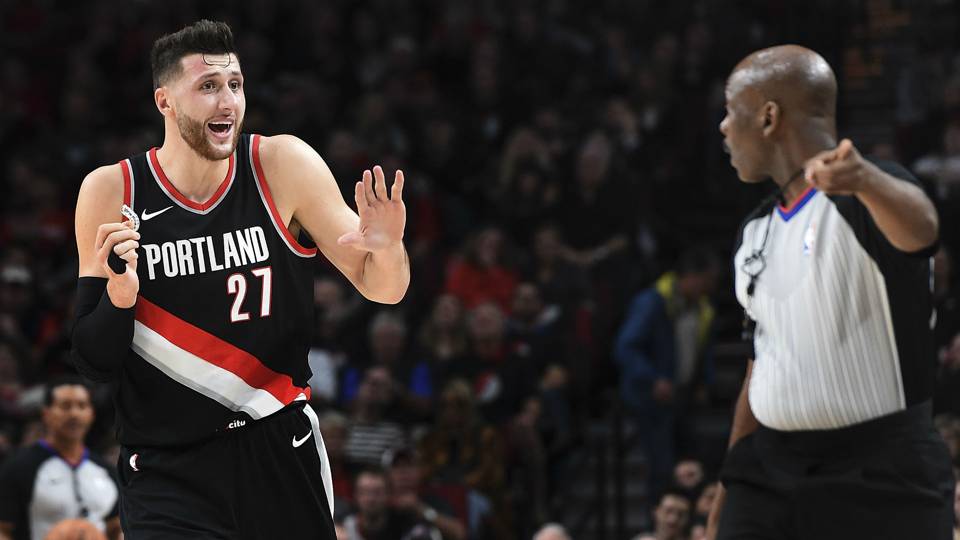 Damian Lillard: 7/32/5/10/0/0 – Great Dame nearly made the lead for this recap because he was absolutely awesome. 7-of-14 from three and an excellent point guard line…EXCEPT…no steals. A couple of steals would have put him in the lead, but it was not meant to be.

CJ McCollum: 2/17/2/5/1/1 – Another nice point guard line from a shooting guard. The Blazers dominated the Heat from the start and CJ, Dame, and Nurkic did the majority of the damage.

Evan Turner: 1/13/4/3/2/0 – Turner keeps trying to get off the waiver wire. Every few games he throws on a skirt and wig and some red lipstick and tries to pull a Bugs Bunny, but instead of seducing Elmer Fudd, he is trying to seduce fantasy owners. Don’t be an Elmer Fudd.

Zach Collins: 2/10/4/0/0/1 – Another guy who is just begging me to pick him up. I love Collins and I think he is going to be a fantasy stud…next season. Deep leaguers may want to keep a close eye on him, however, or just grab him and hope he is a better version of Davis Bertans and a much better version of Dragan Bender.

Tyler Johnson: 4/17/3/2/0/0 – I get a lot of questions about TyJo and I tell everyone, I am not a fan. He just doesn’t hit multiple threes consistently enough to win my THRAGNOF! heart. I would rather have this next guy:

Giannis Antetokounmpo: 1/20/6/4/0/1 – You would think I could spell the Greek Freak’s name by now, but nope, I still need to look it up. I would like to find out what the Bucks’ record is when Giannis hits a three. I’m sure it’s good, but I’m too lazy to look it up, I mean, I couldn’t even do this recap the same night as the games.

Brandon Jennings: 3/16/8/12/0/0 – BJ is going to be very popular. Get your mind out of the gutter, I mean the basketball BJ. You should definitely pick him up if someone hasn’t already, but this line may be his ceiling. You’ve been warned.

Eric Bledsoe: 2/14/6/5/2/0 – This is the first time in history that a man may be hurt by a BJ, but Bledsoe may be hurt by the basketball BJ. Bledsoe is still a strong fantasy point guard, don’t be too worried.

Marc Gasol: 0/17/7/3/1/1 – The Grizzlies are in full-on tank mode and I would like to take a minute to tell Son that he wins, he was right. The Grizzlies didn’t just lower Tyreke Evans’ minutes in order to tank, they completely benched him with an “injury.” Good Game Son, that’s why you’re the boss. Watch out for Gasol sitting a lot.

JaMychal Green: 0/11/7/1/2/0 – No blocks kind of sucks, but Green has been a very consistent fantasy center when healthy.

Paul George: 4/21/6/5/0/0 – The Thunder will be scary in the playoffs and Thunder players will be scary on fantasy teams in the fantasy playoffs. George is having a great final season on the Thunder.

Bogdan Bogdanovic: 3/19/8/3/0/0 – Majorly inconsistent, but too good to be on waivers. That is the definition of frustrating in fantasy.

James Harden: 2/28/6/6/0/0 – Houston dominated this game and Harden only needed to play 28 minutes. On a side note: I really think the Spurs may not even make the playoffs, wow.

Rudy Gay: 1/13/5/0/0/0 – This was the best line on the Spurs, really. This is why I could see them not even making the playoffs. Are the Spurs better than the Jazz? Than the Pelicans? I don’t think so.