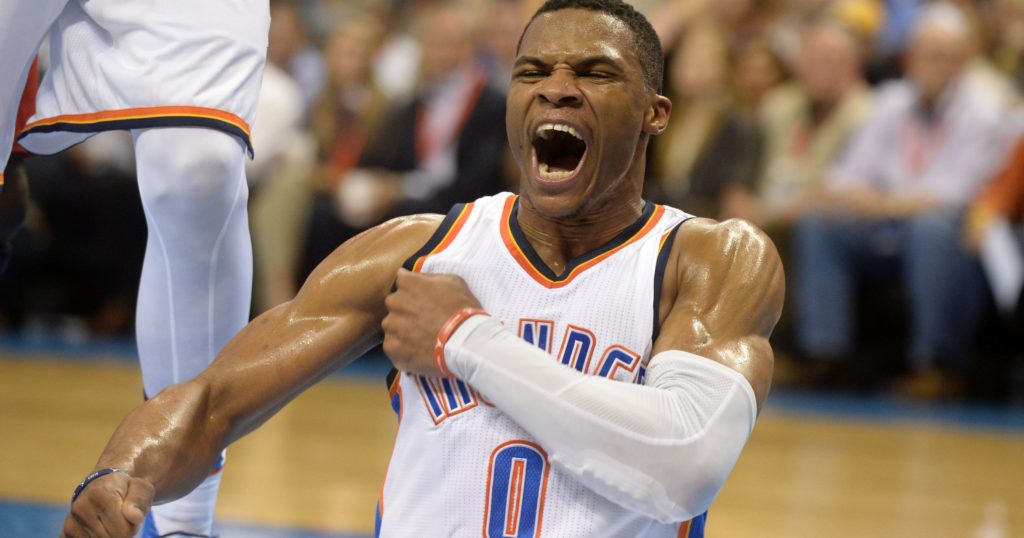 Half man, all amazing.  Or something like that. 49 points, 8 boards, 5 assists, and 2 steals.  Oh yeah, he also went 8-15 from deep.  He had 5 TOs, but I feel like we can forgive him with all of the extra 3s tonight.  The assists and boards have been off his triple double place, but man can this guy ball.

That’s it for today folks!  (I’m not staying up to recap the Lakers-Trailblazers game, so I’m afraid you’ll have to check out those highlights yourself.)

Are you TRYING to jinx Eric Gordon?

Thoughts on the Korver trade?

@Blue: I don’t think his value changes much, but like I said, the wings on Atlanta get a solid boost. In real life, it was a huge score for the Cavs.

I have numerous PG’s and have a huge lead in AST and ATO but need a F to help in PTS, REB, BLK, and %’s. What trade, if any, would you make? Dragic for Harrison Barnes or Teague for Ibaka

@Dimitri Vasilopoulos: Probably Teague for Ibaka after this big night. I don’t see him maintaining that pace with all of the weapons in Indy.

@BILL BLAST: Sounds good to me!

if the important categories are FG%, assists, steals, blocks, and points should I start James Johnson (@LAL) or Ryan Anderson (@ORL) tonight? thanks

I stopped reading your post after I read your comments on Justin Hamilton.

@Brook: I apologize, I meant to say best nets player of the night. That’s just lazy writing at midnight haha.

now that Korver is out of Atlanta and they’re looking to possibly trade Millsap and Thabo, does D12 become more or less valuable?

@Space Jam: I think his value holds – It possibly goes up with Millsap gone, but honestly, I’m not sure he ever be an elite scorer again.

Boban Marjanovic in 22 minutes 15 points, 19 rbs and a block. The only reason the Pistons won. He looks like he could of played 30 minutes. Pistons PG’s and forwards play terrible defense. Baines should stay on the bench. I would like to see Boban and Drummond play some minutes together.

@OldNavy: I doubt that happens with how much Stan Van likes his stretch 4s. Agreed that he should get minutes over Baynes, but honestly, Boban is not good defensively against quicker players, so it’s tough to match him up.

Do any of these guys stand out to you for upside later this year? Thanks!

@JJ: I’d say Simmons and Chriss, although I couldn’t tell you how much value they’ll have. I could see some of the others, but there are no guarantees.

What do you think about my IT for Lamarcus Aldridge and Harrison Barnes?

@Eoisin: I don’t mind it if you’re fine in assists, but I’d rather have the IT side if it’s not a crazy deep league.

Who will the better Miami player ROS?
JRich, JJ, or TJ?

@Ball Junkie: I like the order you have them in. It’s really tough to say though, especially when Waiters joins the mix.

Trade questions for you, two of them.

#1
Giannis and Korver
for
A Davis and Wayne Ellington

@Chris: Trade 1 the Giannis side and trade 2 the CP3 side.

Author
Adam
Reply to  your mom

@your mom: IT – the free throw percentage and volume are too good.

who should I drop for PG in my 9 cat roto 12 team league
Michael Carter Williams or Seth Curry? I want to keep Cater Williams cuz I think he will get it going soon and pad on the stats after Rondo leaves but, his freaking inefficiency is what I am concerned in roto. Seth CUrry is actually quite well but his PT will likely fluctuate.

I need another PG, I have Damian Lillard, Chris Paul, Michael Carter Williams and Seth Curry

@Michael: I hate MCW, but I’m probably dropping Seth there. MCW will get you those PG stats.

I got Jokic 4 weeks ago before he went off so I am thrilled. Now is he a sell high guy?
I think I could get one of these deals done.
1. Jokic and Leuer for Lowry
2. Jokic and G Harris for Lowry
3. Jokic and Sergio for Lowry

If that owner balks, my other option is D’Angelo.

1. D’angelo for Sergio and G Harris
2. D’Angelo for G Harris and Leuer

My team is solid I think in a 12 teamer, h2h, 9 cats so I could hold to. But kinda concerned with assists, threes.

Thanks for your thoughts

I wouldn’t mind D’Angelo, but I’m not sure he’s any better than Harris.

Honestly, with the assists from Jokic, and Simmons later on, you’re probably fine. 3 pt volume is a little more concerning, but Goose should help a lot. You really just need a healthy CP3

Turned out he was a DeRo fan. I sent him DeRo and Monta for Lowry.

Would you trade Lowry and Vucevic for Westbrook? I feel like i would need a sweetener along with Westbrook to make it more fair.

Author
Adam
Reply to  ThE sHiT

@ThE sHiT: Yeah, I’d hold the Lowry side. I really don’t want Westy in 9 cat. 8 cat is another story.

@Ken Dean: Either one can be dropped for a hot streamer. I really have a hard time picking up Parsons… He could be good, but he really looks like a bust for this year.

@Kennneth Dean: I feel like there has to be a better option – It doesn’t really look like you’re lacking threes.

Thanks that puts things in perspective, first year playing fantasy basketball!!! Played football n baseball for years tho!!! I appreciate the advice!!!

Hey man, Would you trade Kevin Love for K Leonard?
Trade analyzer rated love at 24.92 and 27.97 for Leonard.
Considering everything, like Kawhi possibly being rested more than Love do you think itll be worth it?

Also how do you feel about my avery brdaley for Marc Gasol.
I appreciate your time and prompt replies. Thanks in advance.

Currently sitting in first place but ill probbaly be second at the end of this week due to all the injuries.

Again, thank you so much. Id greatly appreciate any help

@Peter: I want the Kawhi side – He won’t sit as much as the older guys, and he makes up for it anyway.

I definitely like the Gasol side in that, but you might need to move Kanter for a shooter if you do that.

thanks for the reply. Its appreciated.
Should i drop anyone for D collison?
Levert is also on the wire

@Peter: I think I’d hold for now – Just keep an eye on the minutes consistency with both of them.