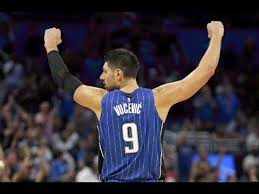 We all have “our” places. The doughnuts taste better at Primo’s, so I’ll always go there instead of Winchell’s. The barber at the place down the street knew when to talk and when to just chill. Plus, the trim and and after-cut wash were fantastic. It’s easy to understand why I chose those places. Now, I used to play volleyball and basketball competitively back in the day. It’s been so long ago that I can’t even Al Bundy it. Regardless, there were always certain places I enjoyed playing at more than others. Sometimes I could point to the reason: the lighting was better at one gym or the floor was “springier” at another. Other times, I’d have no clue. Maybe the air was crisper or the girls were prettier. Maybe the travel time was shorter or the food at the local joints tasted better. Or, maybe the teams just sucked at the places I enjoyed playing. Whatever the reasons may have been, there’s no denying that I played better at certain places. Which brings me to Nikola Vucevic. His first visit to NYC (Brooklyn), Vucevic scored 41 points and grabbed 12 rebounds. One could dismiss the performance as the Nets just sucking. No argument here. Last night, though, Vucevic replicated the Brooklyn performace at MSG:

Granted, Enes Kanter sucks at defense but there could be something about NYC that just jives with Vucevic. Is there a big Montenegrin population in New York? I have a feeling there is and probably some dope Montenegrin eating establishments. So, there’s been one change that Vucevic has made to his game this year. He’s attempting 4.1 three-pointers and making 1.5 per game, after never hoisting up more than one per game. A byproduct of this has been a dip in his rebounding numbers from 10.4 to 8.3. Has he been texting with Brook Lopez? Regardless, Vucevic is a top 40 player right now and should continue to be one the rest of the year.

Kristaps Porzingis did not play due to illness and ankle injury. He’s not travelling for Monday’s game in Indiana, but could be ready for the home game against the Grizzlies on Wednesday. In his place, Michael Beasley got the start and played 28 minutes.

Beasley has always had the ability to score. Unfortunately, he doesn’t do much else. I’m guessing the three boards found him like metal to a magnet. The one assist? Probably lost control of the ball that went to a teammate who put the ball through the basket. The one block? Only explanation is scoring error.

His defense sucks. Feel comfortable streaming against him. With that said, he’s a double-dub machine. As long as he doesn’t get cozy with the coach’s daughter, Kanter should continue to do what he does.

Tim Hardaway Jr. did not play due to a leg injury. Every shooter craps out at some point. In his place, Damyean Dotson got the start and played 22 minutes.

There was a time when I was hairless. Granted, I’m Asian so my story may or may not be relatable. Anyways, when I was blessed with the knowledge that hair would grow under my arms and between my legs, I’d check everyday to see if it was there. Every day….nothing. Then, BAM! There it was. That’s how I think of Green as a fantasy asset. You watch the game. You check the box score. Doesn’t seem like much, then BAM! Top 30 fantasy player.

With Hassan Whiteside out, Bam Adebayo got another start and played 20 minutes.

With the Heat needing more offense in this game, Kelly Olynyk played 28 minutes.

The last two games, Wesley has shot 1-for-10 and 2-for-8. Don’t fret, though, because it’s not like you were relying on him for scoring. You weren’t, right? He’s going to get a ton of minutes, opportunities, and will contribute across the board. Like any Johnson, there will be ups and downs.

Jamil Wilson got the start at power forward for the Clippers and played 29 minutes.

The two beneficiaries from all the injuries for the Clippers are Austin Rivers and Lou Williams. 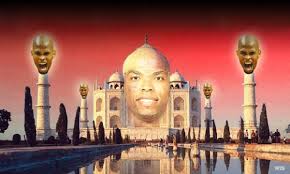 All he does is play 40 minutes and double-dub. Taj now has nine on the season, good for 18th in the league.

Second game back from injury and back-to-back games with 10 assists.

Kyle Anderson left the game with a knee injury. MRI is scheduled for Monday. It’s too bad, as Mr. Anderson had been a top 75 player. Word is that Kawhi Leonard is close to returning, so he would have limited value in that scenario. Speaking of Leonard, I’ve also heard that Big Foot exists. Until I see it with my own eyes, I will be skeptical.

Yesterday was rest day for the Spurs, as Pop sat Rudy Gay, LaMarcus Aldridge, Tony Parker, and Pau Gasol for the second half. Patty Mills only played nine minutes. As a result, Bryn Forbes played 33 minutes, Joffrey Lavergne 23 minutes, and Davis Bertans 29 minutes. The most interesting man for the Spurs, though, was Dejounte Murray who played 39 minutes and went:

Murray is only 21 years old and has upside. Unfortunately, he’s only viable on Spurs Siestas. Parker and Mills are ahead of him on the depth chart.

You know what doesn’t mess around? The Stocktonator, as it had Russ as the number one overall player last night.

That’s back-to-back games with nine points, after scoring in double digits the prior seven games. There’s a hierarchy to everything in life. The driver of a car is the man. There can only be one. Shotgun is the “right-hand” man, literally and figuratively. The back seat is for the minions or peanut gallery. The trunk is usually for the clowns or people of small stature. Well, Melo is bordering on clown status.

Adams grabs boards and is the recipient of cheapies from Russ. He gets the love from RW because he’s the only one as crazy as him. It’s like Murtaugh and Riggs from Lethal Weapon, except you’d replace Murtaugh with another Riggs.

I’m a Lakers fan, but I get Harden excited watching him play. So smooth. So good.

Still pisses me off that Stern nixed the Paul trade to the Lakers. Such BS. Anyways, I’m excited to see how Paul and Harden continue growing with each other. Harden played 35 minutes while Paul played 33.

Brook Lopez played 20 minutes, Julius Randle played 16 minutes, and Larry Nance Jr. played 30. I still believe that Nance and Randle fit this team the best, but Lopez is not going to get totally phased out.

He can play both the 4 and 5 and I think he gets most of the minutes going forward.

He will shoot threes and get blocks, but he doesn’t board for a big man and….most importantly….is not getting the minutes.

Randle was in foul trouble and just couldn’t get going. Up until last night, he’s been a spark and, if you look at the lineups with the best net rating for the Lakers, he’s a part of all of them.

Big Ball Buster. He’s no Kuzma, but he will be fine. The highs will be Method Man, while the lows will be Barry White.