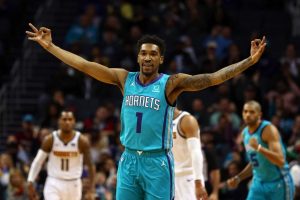 A monk is a person who chooses to dedicate his life to serving others or voluntarily leaves mainstream society to pray and contemplate life. I leave mainstream society often….to play fantasy sports. Fantasy monk? I kid, as I admire the discipline that monks have. I can’t even stop myself from making my order a meal and supersizing. Anyways, Malik Monk was drafted by the Hornets with the 11th overall pick in 2017. Since that time, though, it’s felt as though Monk has been locking himself up in the library, as we have not heard or seen much of him in the fantasy realm. But once in a while, he will rise up from the bench and deliver a performance that makes us remember. Last night was one of those games:

In 27 minutes off the bench. Now, P. J. Washington’s injury afforded him some more run, so I wouldn’t expect him to be an integral part of the team. At least not yet. He’s just too inconsistent and doesn’t contribute much outside of points and tres. Beep. Boop. Bop. You know what’s always consistent? The Stocktonator. With that said, he’s still only 21 years old and there’s a chance he discovers the 35 Chambers.

Returned from injury and played 25 minutes. It’s the Showcase Showdown!!!

The Hornets will likely give Starvin’ Marvin all he can eat in order to entice another team to acquire his services.

Made his return and played 30 minutes off the bench. The usage rate was 29.3, so it shouldn’t take long for him to ramped up and provide those fantasy goodies.

The Kings had seven players score in double figures, yet outside of Fox, no one scored more than 14 points.

Anthony Davis did not play, so Jared Dudley got the start and played 15 minutes. Vogel went to Jared!!!

In 26 minutes off the bench. Obviously got more run with AD out, so don’t expect 26 minutes every night. More like 20-22 minutes per game. Boards, blocks, excellent field goal percentage, and atrocious free throw shooting are what you will get.

A bad shooting night for LeBron all around. With AD out, the Pacers went box-and-one on defense and shut down the easy looks at the basket. He still got some because he’s LeBron, but expect other teams to employ similar strategies in the future. Usage rate was 36.4 last night.

Sabonis was a beast down low with no AD. He’s second in the league with 23 dub-dubs. Giannis has 24. For fantasy, Sabonis is like a top 50-60 player because, while he contributes points, boards, and dimes, he doesn’t provide much in the defensive categories.

Played 30 minutes off the bench, as Jeremy Lamb left the game early due to a hamstring injury. Holiday can provide points, tres, and steals, and could likely see a big uptick in run if Lamb is out for an extended period of time.

It’s so frustrating watching him play because he just camps out in downtown on the offensive side of the ball. That’s a big reason why his rebounding numbers suck. I mean, 6 boards per game for a man of his size and athleticism? Anyways, at least the blocks are elite at 2.4 per game. Still, Myles is barely a top 100 player for fantasy.

In 41 minutes! Just another Trae Day. Top 25 player for fantasy. The only things holding him down are the lack of blocks and the sky-high turnovers.

The elixir to cure all shooting woes: the Atlanta Hawks defense. They allowed the Knicks to score 143 points! Don’t get gassed by this performance from Barrett. He’s shooting 39% from the field on the year and 55% from the line.

In 24 minutes off the bench. Seriously, that’s how bad the Hawks D is. I actually had to write up and give a stat box for Knox. No, there is no treasure in this fort.

At least he’s getting the minutes. Over the past seven games, Mitchell Robinson’s neighborhood has averaged 27.3 minutes, 14 points, 8.1 boards, 1 steal, and 1.6 blocks. The field goal percentage has been an impressive 69%. The free throw shooting has also been at 69%. Not bad. Top 35 player for fantasy over that span.

Points, boards, and some dimes. That’s it. Fine, some tres from time to time, but literally Julius does nothing else. That’s why he’s outside the top 200 for fantasy.

Got the start and played 35 minutes! Hallelujah!!! I’m liking this Atkinson diet more and more.

I’ll write it again: Dinwiddie is a top 50 player for fantasy when he starts. Off the bench, he’s a top 70 player. The minutes decrease by six minutes when he comes off the bench, but the usage increases by four. He will still have value when Kyrie returns, but won’t access ceiling games often.

Not-your-average Joe is primarily a tres specialist, but will contribute some boards and dimes as well. He’s converting 43% of this shots from downtown.

The efficiency has fallen off recently, as he’s shooting 45% from the field, instead of the 49% he was posting. He hasn’t been dishing as many dimes and the defensive stats have decreased. With that said, I still believe that the breakout is real.

There’s been chatter that Jrue could get traded if the right deal comes along. I doubt it happens, but if it does, the usage and shot attempts will both likely take a hit. That’s all contingent upon the team, though. We will deal with that if and when it comes. As it stands now, Jrue is an across-the-board producer and can join the 1/1/1 club if he ups his block game. The one bugaboo has been the poor free throw shooting  (67% on the year).

Played 40 minutes off the bench. J. J. Redick didn’t play last night, so Hart got extra run. Hart’s upside is limited, but he can pop off for ceiling games once in a while. The shooting efficiency is normally poor, but he can provide tres, boards, and steals.

In 26 minutes off the bench. He’s fighting for his job now? I respect it. This DJ will provide dimes on the reg, but don’t count on any of the other counting stats often, and for sure don’t expect the hot shooting to continue. He’s shooting 38% from the field on the season.

BojBog is no BoBo. Well, technically he is but you know what I mean. He’s converting 45% of his shots from downtown, that’s good for eighth in all of basketball! For fantasy, he’s a top 90 player, as he provides points, tres, some boards, and a little helping of dimes. Not much contributions in the defensive cats.

Continues to start and played 37 minutes. I told y’all that ’tis the season. Jingle bells! I expected him to return to the bench when Mike Conley returned, but he did not. Now, Conley tweaked his hamstring again, so it truly will be the season.

As solid as they come for fantasy. Don’t expect blocks, but everything else is lovely. The most impressive aspect of his game is that he only averages 2.4 turnovers, despite garnering a 31.6 usage rate. I love sliding in this DM.

Gobert had only one game in November in which he did not block a shot. So far in December, there have been four such games. Last season? Only 10 such games all year.

Returned from suspension and played 24 minutes. Why? Because the Suns got eclipsed, 99-120 by the Clips. It’s good to have Deandre back. How much? Ayton.

Devin Booker did not play in this one, as he’s nursing a forearm injury. As a result, Ty Jerome played 18 minutes, Eli Okobo played 23 minutes, and Jevon Carter played 23 minutes. Minutes were also elevated due to the blowout. The answer to your question is no.

No stat boxes. Send all your hate towards the Suns.