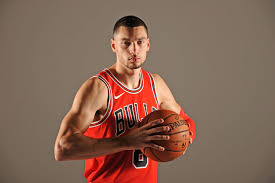 When Zach LaVine popped his head out from his mother’s womb, his first words were, “Who’s got next?” On his first day of school, his mother tried to dress him in his finest clothes. LaVine responded, “No, mom. We skins today.” When the other kids would go out and party, LaVine would be in the backyard playing hoops. As a result, he would receive Valentine’s Day cards from basketballs and they/it would write letters to Santa saying that they were good basketballs and that all they wanted for Christmas was Zach LaVine. LaVine was born a baller. He lived his life as a baller. Now, he’s a baller on the grandest of stages. Last night was the latest example.

Beep. Boop. Bop. You know what’s always a baller on the grandest of stages? The Stocktonator. That was the fifth 40-burger of the season for LaVine. He’s averaging 25.3 points on the season, which is good for 11th in all of basketball. The tres are at a career-high 3.1 per game, and so are the steals at 1.4 per. He’s not just a 3-and-D player, though. The usage rate is over 31 and he supplies a consistent supply of 5 boards and 4 dimes per game. That all translates to a top 35 player for fantasy on the season.

Young has now started the last nine games. On the season, he’s started 10. During that span, he’s averaged 32.5 minutes, 13.4 points, 1.3 tres, 5.8 boards, 1.7 dimes, 1.6 steals, and 0.4 blocks. The field goal percentage has been 51%, but the free throw shooting has been a wretched 53%. Still boggles my mind that professional ballers can’t make free throws. Anyways, when Lauri Markkanen returns, which could be at the end of the month, Young will go back to playing 22 minutes per game. Until then, he’s viable if you need defensive stats, tres, and boards.

In 35 minutes off the bench, a season high! White doesn’t do much on the regular. The usage rate is high at 23, and he boards well for a guard, but the defensive stats are usually lacking, as well are the dimes. He provides tres, but I wouldn’t consider him a specialist. The main thing holding him down is the shooting efficiency. 37% from the field on the season. Yuck. He will have ceiling games like last night, but they come too infrequently to rely on in standard leagues.

Well, well, well. Konichiwa, Rui-san. I thought you were just a points and boards guy, but you showed the all-around game last night. I’m not buying it, though. At least not yet. I need to see it more on the regular, but it is a good sign that he has it in his bag.

In 16 minutes off the bench. Looks like I was wrong about Brown. With everyone healty, what can Brown do for us? Well, he’s definitely not delivering the goods like UPS.

In 27 minutes off the bench. Probably getting extra run due to Thomas Bryant’s injury, but he showed earlier in the season that he could be highly productive with only 20 minutes per game. Points, tres, boards, and excellent percentages are on the menu. Whether they get served or not is the question.

DeMar DeRozan did not play due to a back issue. When he’s off the floor, LMA garners a 30% usage rate, an increase of 6.4%. I love seeing the boards, but that was only the 13th game that he’s grabbed at least 10 boards in a game. Anyways, he’s doing it all this season and is a top 25 player on the season.

Murray got the start and played 27 minutes, while White played 28 minutes off the bench. Dejounte starts with a D. Derrick starts with a D. Murray starts with a M. White starts with a W, which is an M upside down. Mind blown. Illuminati was here. Both players are good, but their fantasy upside is capped because they infringe upon each other’s playing time.

The ultimate stay-in-yo-lane player, Mills aka the Aussie Steph Curry popped his head out from the ground and did what he do.

Continues to start and played 31 minutes. Over the last four games, Lyles has been a top 50 player. He boards and provides defensive stats. He will even chip in some tres, which is appropriate for Trey. Don’t expect much else, though.

Adams is outside the top 100, as the points and steals numbers have declined from years past. In addition, the shooting efficiency has been up and down. On a happy note, he’s still dishing out those dimes. yay….

In 27 minutes. He won’t stop. He can’t stop. He will not stop. Hassan has been around the fantasy world and….it’s like he’s alone in the International Space Station, just looking down upon Earth. Top 10 player on the season.

In only 28 minutes. Going up against Melo helped, but regardless, Zion is a force of extraordinary magnitude. The tres probably won’t be a part of his game, but points, boards, and some dimes should be there on the regular. The defensive stats, or more specifically, the lack of blocks is somewhat troubling. That was one thing we thought would translate from college, where he Mutombo’d 1.8 per game. Is it blasphemous to think he could be Julius Randle 2.0 if he doesn’t get the blocks ramped up?

Top 40 player on the season. Some may be disappointed because they were thinking top 10 production. That would’ve been tough with all the new additions, but I understood the thought process. With that said, he’s still averaging 19.4 points, 2 tres, 4.7 boards, 6.4 dimes, 1.7 steals, and 0.9 blocks. Man, that is really freaking good.

What he do, baby. #3 player on a per-game basis for fantasy. Dude is a freaking cyborg. My conspiracy theory on Kawhi is this: He’s from the future. As a result, some of the materials that he was constructed with are not available to us in this time. So, when there was damage, only short-term band aid fixes were available. Steve Ballmer is furiously searching for the DeLorean on Craigslist so that he can send someone to the future and retrieve the necessary materials.

What is George’s excuse? He is shooting 42% from the field on the season, so he has these games once in a while. Hmmm, do you think George is from the future, and his materials can’t be found as well?

My RichardSON!!! Got the start and played 32 minutes, so it looks like he’s ready to go now. With that said, I’m not believing that all is right in the world with my RichardSON. I need to see it consistently, especially in the defensive cats. He’s way outside the top 100, so it’s not unreasonable to drop him. Of course, it always depends for who and what your squad looks like.

In 28 minutes off the bench. The move to the bench could be a good thing for Horford, as the usage rate increases 3.3% with Embiid off the court. With that said, it doesn’t look like he’s going to be that top 40 player from earlier. Top 100 is probably more in the cards. Horford won’t provide many points, but tres, boards, dimes, and some defensive stats should be in the offering.

We know Tatum can score. The efficiency can be poor like last night, but on the season, he’s shooting 44% from the field. He boards well and even dishes out some dimes. The areas that determine if Tatum will be a fantasy stud are in the blocks and steals cats like he displayed last night. On the season, he’s at 1.3 steals and 0.9 blocks, good for top 20 player. Over the past three games, when he’s averaged 1 steal and 1.7 blocks, 7.7 boards, 4 dimes, 30 points, and 5.3 tres on 50% shooting? #7 player.

I guess this Westbrook on Houston idea is working out pretty good. Over the last 11 games, he’s been a top 10 player. Playing small and having the floor spaced has been ideal for his game. The usage rate has been over 36%!

When Harden doesn’t mess around while cooking a 50-burger, it’s such a buzz kill. That’s how freaking good he is. Now, recently, it’s felt like Russ has taken over things in Houston. The usage rate has been 4% higher. Regardless, Harden is still a top 10 player. On the season, he’s the #2 player for fantasy and could become the newest member of the 1/1/1 club, as he’s currently averaging 1 block per game, a career high!