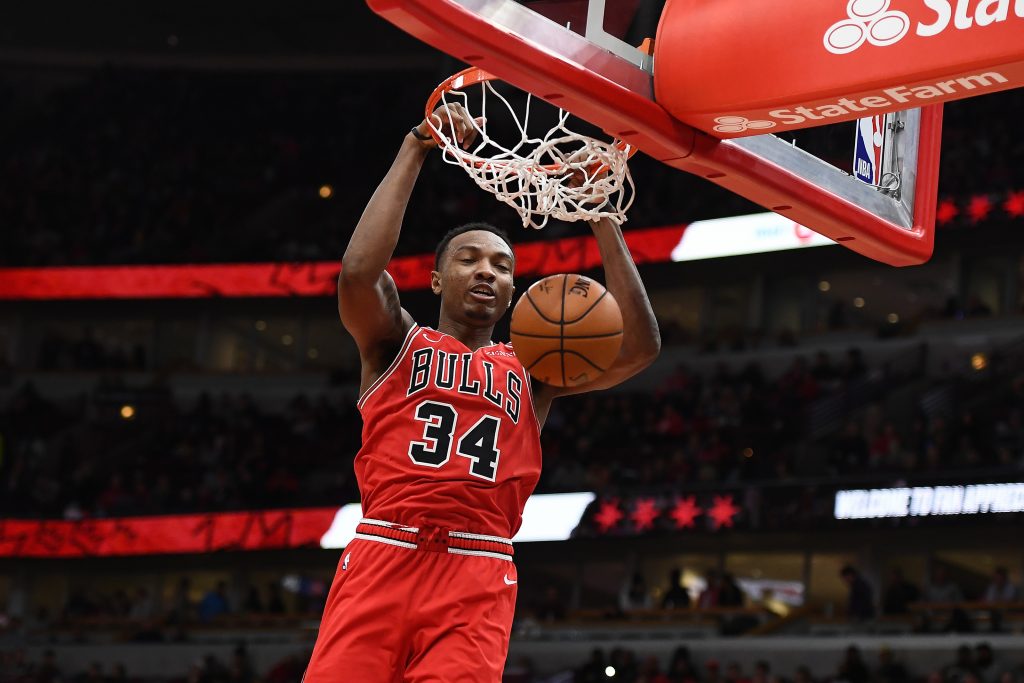 Unless we’re talking Jevon or MCDub, Wendell is all we’ve got. The Bulls’ big man has been playing pretty well since returning from injury. The minutes are slowly increasing: 21, 27, 25, 33, and 29 in his last five outings. This was easily his best one yet, and I’m expecting top-80 production the rest of the way.

Double-doubled with a couple of dimes and a block.

Young is somehow clinging to fantasy relevance even in diminished minutes. When those 20 minutes shrink to 15-17 with Markkanen’s return, that should spell the death of Thad.

Tate has been a top-65 player in the past two weeks, thanks in large part to his prodigious swiping abilities, but also the out-of-position affinity for boards. I will say the shooting seems unsustainable, though.

Unfortunately Nwaba doesn’t make many threes (0.6 a game), which kills his value as a guard.

Ja has been slumping, ranking outside the top-100 over the past month. Tonight he shot at a decent clip and took care of the ball—let’s hope he makes a habit of it.

Luka did everything but connect from the line as the Mavs took down the Grizzlies.

JRich ranks outside the top-100 because he’s shooting just 42.4% from the field and the defensive stats are nowhere to be found. Tonight, shooting and turnovers were the issues.

7-11 from three. Guy can shoot the lights out, but we knew that already.

The 61st-ranked player in the last week of hoops. Could be a ride while he’s hot scenario.

Top-20 on the year. Keep doing what you’re doing, Bam.

Exploded in 41 minutes. With Herro and Dragic out, Nunn was always going to get his, putting up a team-high 18 shots and filling up the box score.

6 tres, 7 boards, 2 steals. Robinson has been underwhelming to start the season but he will always retain value solely on the back of his shooting ability.

Shai was the only Thunder doing something, which is quickly becoming the norm for this young squad.

Most of the starters played low minutes as this was a blowout after three quarters. Covington still did enough to please fantasy owners, though he also turned the ball over four times. The whole Blazers team kind of rolled over on this one, so he gets a pass.

Dropped 18 in just 16 minutes of action. Little was efficient and racked up 5 boards along with 2 stocks. If he’s only playing 16 minutes now, though, with the Blazers all banged up, I don’t see him getting any more thrown his way when the team’s healthy.

Top-65 on the year. Only played 26 minutes, so the line could’ve been even better if the game were competitive.

The 34th-ranked player in the last two weeks put up an auspicious 34 points. Boards and assists are still down from last year even over that stretch, and I’m not expecting them to return anytime soon.

P.J. has been mired in a slump along with issues staying on the court, but this game is a glimpse into the kind of all-around production he can provide.

The 35th-ranked player over the course of the season. This Hornets team starts and ends with Hayward.

This kid is so good already, and has been proving naysayers wrong especially with respect to his shooting. Averaging a respectable 80% from the line, LaMelo’s value is buoyed by his high assist and steal rates.

The Stifle Tower did a whole lot of stifling, to the tune of 6 blocks in 30 minutes of action. For those arithmetically-challenged like myself, that’s a block every five minutes.

Jingles isn’t a great fantasy player, but he is a key part of Utah’s success. Tonight’s line shows his capabilities as a streaming option, as he will provide points, tres, and assists.

Utah shot 50% from three as a team. Niang was a perfect 7-7 and didn’t attempt a single two-point field goal. Efficient king.

Only took one three-point attempt, which is a welcome sight for fantasy owners. Triple-double threat nightly, in case you haven’t watched basketball for the past five years.

Matched Russ’s 44 minutes of play and turned in an eerily similar statline to boot. Who said Russ and Beal don’t have chemistry?

Missed the game-winning free throw and turned the ball over 8 times en route to a loss to the Wizards. And yet the King is the King, and his fantasy line was still pretty good, all things considered.

Fouled out after 27 minutes of action, but filled up the statsheet beforehand.

Efficient as ever, Montrezl is a top-100 player in 9-cat.