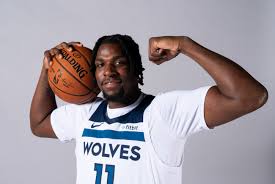 Naz Reid was a highly-touted recruit in high school and was ranked as the third-best power forward/15th-best overall player in the nation. He played his college ball at LSU and declared for the draft after one season. He’s 6′ 10″, 240 pounds, has feathery touch from downtown, has decent handles with a wicked spin move to maneuver in the paint, is agile for a man his size, and can dish out dimes. Then why did he go undrafted? He didn’t dominate his one year in college and tanked the pre-draft combine. But the Minnesota Timberwolves knew because it wasn’t hard to tell that he was Illmatic…….

Ahhhhh, love that song. Anyways, can’t give the Timberwolves that much credit because if they truly knew then they would’ve drafted him. Regardless, they took a shot and their gamble looks to have paid off.

Shai is so good, but he hasn’t even begun to tap his fantasy ceiling. 20+ points seems like an inevitability. Entrance into the 1/1/1 club is only a matter of time. He is already one of the better rebounding guards in the game. The turnovers are light and the percentages are good. The only thing missing are the dimes. It wouldn’t surprise me if he’s a top 25 player next season.

We had a doozy in New Orleans, as the Timberwolves plucked the Pelicans, 139 – 134. Both teams are top five in offensive pace and both are in the bottom-third for defensive efficiency. A fantasy matchup made in heaven.

Continues to start and played 34 minutes. Over the past four games, Juancho has averaged 31 minutes, 15.8 points, 2.8 tres, 9.5 boards, 2.3 dimes, 1.8 steals, and 0.5 blocks while shooting 54% from the field. The free throw shooting has been poor at 44%, though. Now, he’s a 40% shooter from the field on the season and is converting 62% of his free throw attempts, so regression will hit both cats. If Karl-Anthony Towns returns, then his usage will obviously go down.

Continues to start and played 36 minutes. Seriously, how good are the Denver Nuggets? He’s been in Minnesota for 10 games and is now a top 50 player for fantasy. He’s averaging 34 minutes and jacking up 16 shots per game! Points, tres, boards, and steals are what he delivers.

In 21 minutes off the bench. JJ is only averaging 24 minutes per game, but he’s turned back the clock and brought out his across-the-board ways. He stuffs the sheet and has been unleashed from the Miami dog house. Who let the dogs out? Woot Woot. Ok, my bad.

My WilliamSON!!! I probably don’t deserve to do that because I was low on him coming into the season, but, but, but…..the letters don’t lie. It’s good to see the defensive contributions because those are what will lead him to fantasy glory. We know he’s going to score because no one can stop him. He’s going to jump over tall building to grab boards. The only issues that could put a damper on the party are the lack of tres and poor free throw shooting.

Talk about stuffing the stat sheet! I think he and Zion enjoy playing with each other. Ewww, not like that, you pervert. Over the past three games, Lonzo has been a top 10 player. Now, the counting stats will be there, but it all comes down to the shooting efficiency. On the season, he’s at 40% from the field and 57% from the line. During this currnet heater, he’s shooting 51% from the field and 63% from the line.

While Lonzo and Zion were busy playing with each other, Jrue was just messing around for the fourth time in his career. He’s a top 50 player for fantasy. 19.2 points, 2 tres, 4.8 boards, 6.9 dimes, 1.7 steals, and 0.8 blocks with 44% from the field. That ain’t bad, yo! The only bugaboo is the 69% shooting from the line. WTF!!! Why can’t professional ball players make free throws? It’s absolutely mind boggling!!

Siakam IS a 1/1/1 member, but the club doesn’t issue the cards until all the games have been played. Stressful times indeed. If the NBA wanted to give Siakam the Most Improved Player in back-to-back years, I’d be okay with that. He’s increased the defensive stats and the offensive load increase has been huge. Last year, he had a usage rate of 20 and shot 12 times per game. This season? The usage rate is close to 29 and he’s hoisting 19 shots per game! P. S. – he’s really good.

Awwww, so cute. They wore matching stat lines. Powell got another start and played 38 minutes because Fred VanVleet was out due to a shoulder injury.

The Force comes and goes with Anunoby, but when it comes, it comes hard. Phrasing, Son, phrasing. O. G. is primarily a steals and boards guy with a side of tres. When he scores, though, he can put up top 10 production.

In 29 minutes off the bench. Marc Gasol is still out and Serge Ibaka did not play due to a sore knee, so Boucher picked up most of the slack. Curiously, Patrick McCaw got the start, but Nurse came to his senses and started Boucher in the second half. Boucher is more than just a water boy, and he can access the ceiling like last night, but he’s buried on the depth chart when everyone is healthy.

He’s been playing great. The points, boards, blocks, and good percentages have been making us like him Ayton. Unfortunately, he injured his ankle last night and was seen with crutches. Ayton missed a bunch of games earlier this season due to ankle issues, so expect him to miss more time again. Aron Baynes was a DNP-CD last night, but he would likely get more run if Ayton is out for any period of time.

Awwww, they also wore matching stat lines. Must’ve been one of those nights.

All the Johnsons were elevated last night I see. Cameron has had a few games like this, but they’ve been too few and far between to count on him. He can provide points, tres, boards, and some defensive stats, but the shooting efficiency isn’t great.

Maybe he isn’t just a points and boards guy after all. The steals have really picked up lately. I’m not sure I believe it for the long term but at least he’s showing the capacity. The percentages are really good for Rui, 49% from the field and 82% from the line.

The World Numerology Society has been alerted and they are sending their best people to come study this stat line. Since returning from injury, Thomas has played 19, 15, 18, 15, 14, and 16 minutes. This train is having difficulty getting ramped up. Chugga chugga poo poo….

Why is everyone gawking? It’s just cooked Beal. And it’s not even the hottest we’ve seen him.

In 29 minutes off the bench. Bertans is the ultimate tres specialist, but he also chips in boards and defensive stats. Hmmmm, then does that disqualify him from being a specialist?

Top 25 player over the past three games, primarily on the heels of 53% shooting from the field and 84% from the line. On the season, he’s shooting 68% from the line. The usage rate is over 30% and he even chips in some blocks from time to time. He needs to increase the tres and free throw percentage in order to crack the top 50.

Continues to start and played 27 minutes. Hmmm, maybe the Kings will unleash him? Alex Len only played 14 minutes so…..Much hinges on whether Richaun Holmes returns or not. I think there’s a chance he doesn’t.

What’s more believeable? Wiggins with 10 dimes or the Warriors winning by 16 in Denver?

Got the start and played 35 minutes, his first career start. No wonder last night was all freaky deaky: Agent Mulder got a start in the NBA.

In 35 minutes off the bench. Draymond Green was out with a sore knee, so Paschall got extra run. He’s mainly a points and boards player who will shoot a decent percentage.

He’s a top 10 player right now. And that is without a hefty block number. Imagine if he gets that to over 1 per game? The simulation would crash, right?

In 35 minutes off the bench, while Jarrett Allen only played 18 minutes. The Nets were down, so Atkinson put in the DJ, who kept spinning the good tunes for Atkinson, so he turned up the volume and let him roll.

Gordon Hayward left the game after 17 minutes due to a knee contusion.

Returned from injury and played 23 minutes. He should get ramped back up in no time.

In 28 minutes. I can’t wait until the Spurs unleash Murray, especially after another year with the shooting coaches. It’s not going to be this year, but next year seems logical. The speed and agility that Murray exhibits are breathtaking at times. He and Shai seem similar to me. Am I tripping?

Got the start and played 34 minutes because Devonte’ Graham did not play due to an ankle injury. Martin is a low usage player who will provide boards, dimes, and steals. When Graham returns, he will go back to playing in the mid-20s.

Got the start and played 19 minutes after logging a bunch of DNP-CDs with Bizmack Biyombo getting the start. The roles have now flipped. I have no idea what’s going on in Charlotte.

In 18 minutes off the bench. If Biyombo is going to be collecting DNP-CDs, then Willy will get freed to some extent. He can provide points, boards, and some dimes.

Continues to start for the injured Joel Embiid and played 33 minutes. He is once again a top 40 player, as he stuffs the stat sheet, but will return to the abyss when Embiid starts playing again.

In 31 minutes off the bench. No Ben Simmons. No Joel Embiid. No Josh Richardson. So, after Tobias Harris it was Robinson who stepped up. He actually shoots well from the field (48% on the season), but doesn’t do much else outside of getting a steal here and there. When everyone is healthy, this dog will have no bite.

The numero uno player for fantasy on the season. The World Numerology Society should be sending their best men for this stat line. Man, just stay healthy.

The #10 player for fantasy. There’s nothing to say or write except…..

I love that you made Reid the lead man over Leverts 51. Love, love. Lol

Speaking of Nasty Naz, I was able to scoop him last night.

Only thing is, I dropped Reddish, because I had White locked in to a lineup already & when I saw Naz was coming out with a small break through game, I nabbed him. He’s be gone by the morning if I didn’t.

Do you see KAT coming back any time soon ? My playoffs start March 16th.

Not completely mad I kept White instead of Reddish. White did have the 2/2/2 where it counts. Was looking at maybe swapping him for Finney-Smith. (Mainly on the strength of Dallas playing B2B Monday/Tuesday the first week of my playoffs.

What do you think there ?

My team is also light on SF with only 2 of them right now. 6 PGs, one has to go I feel.

Here is the build –

All pretty meh. I could just chill.

Holla at your boy!

Update – Cam is off the board

Good pickup. I’m surprised Naz was out there.

No idea on KAT

Would you drop anyone for waiver ?? H2h,9cat

Naw, looks good to me

Son
Reply to  Everybody Loves Draymond

Negative for me. If you don’t think that the Bulls ramp up WCJ and KAT doesn’t return for MIN, then go for it.

I’ll hold as well. Thanks Son

Hey now- Should I just cut Draymond at this point? Or I could stick him in my IR spot and cut Gasol. Playoffs start W22.

I’d hold him for now. Reassess when the time calls for it

Juancho or Prince in a points league