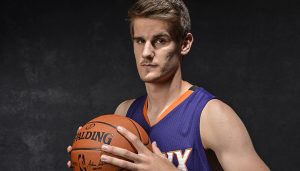 I no longer drink or partake in the drugs, but I used to. The number of benders I went on were so numerous that they all blended into one big bender. Most of the time, they were enjoyable experiences. Or at least I thought they were. I’d party or play video games or do whatever silly things my friends and I would conjure up. But….bender’s are usually undertaken to escape the realities of life. As a result, the short-term high is usually replaced with the low of wanting to go on a bender in the first place. Which brings me to Dragan Bender of the Phoenix Suns. Last night, he played a team-high 39 minutes and went:

Now, Marquese Chriss left last night’s game in the second quarter, so Bender was the guy to replace him. Before we start ejaculating all over the table, let’s keep in mind that Bender is a career 36% shooter from the field and has a career line of 4.4 points, 2.7 boards, 0.8 assists, 0.2 steals, and 0.5 blocks. With that said, Chriss could be out for an extended period of time and Bender could be the primary beneficiary. So, what kind of Bender are we getting? As a 7′ 1″ 225 pound player, he does shoot the three-ball well (36% on the season so far). And he’s only 20 years old, playing in his second year in the league. There’s obvious potential. With that said, I have a feeling that the experience of owning Bender will be similar to the one of owning Chriss, but without the massive upside. Bender may literally induce his owners to go on a bender.

My baby boo. DSJ is still my main boo, but DMitch is right there. DSJ better watch out because I be sliding into DMs. I’m beginning to think that the Stocktonator be sliding into the DMs, because it loved Mitchell last night.

Played 30 minutes and committed three personal fouls. Couldn’t get one steal or block? At least we could’ve gotten two-thirds of a chornological line. I thought Rubio’s delivered!

Got the start at power forward and played 29 minutes. So, in the past six games, Thabo has had two DNP-CD’s, but scored double figures in each of the other four games and attempted at least 11 shots in three of the four. He played 29, 21, 31, and 33 minutes and 211’d at least two. Also contributed some boards and blocks. He’s a viable pickup, but be aware that he may sit if the Jazz decide to go big.

Played 30 minutes. It’s usually a dangerous proposition going with Hood, unless it’s of the car variation. If you see smoke emanating from under one, though, you call AAA. When Rodney gets hurt, you recount the steps of AA. If you still drink, then you’re in luck.

My son!!! Spoelstra drew up the winning play for him. My son!!!

Played 26 minutes. It’s been six games since he returned from injury, so he should be getting back up to the 30 minute-per-game mark soon.

Goran Dragic and Tyler Johnson both played 34 minutes and scored 16 points. Awwww, that’s so cute. Did they wear matching friendship bracelets too?

Played 27 minutes and collected only his third double-dub of the season. A 1/1/1 player last season, JJ is slightly off the mark in threes and blocks. While JJ will never sweep you off your feet with eye-popping fantasy stats, he does contribute a little something something across the board, so there’s value in that.

It kind of boggles my mind why teams don’t just send a double to Porzingis every time he touches the ball. He has no intention of passing the ball. I get it, though. He can literally shoot over anyone at anytime and he has range. With that said, sometimes it looks like he thinks he’s Kobe surrounded by four Smush Parkers.

Played 25 minutes. Don’t get too gassed by the performance, though. Michael Beasley did not suit up for the game. When Beasley was playing, Hornacek would slide Porzingis to center and play Beasley at power forward, leaving Kanter time to ponder his political affiliations on the bench.

Played 23 minutes. Has played more than 20 minutes five times since the start of December, but he has been seeing at least 15-16 minutes in every game. He’s more a playing-time blocker than anything, but he’s someone to keep in mind if Kanter gets injured or falls out of favor.

Played 25 minutes. New Jack City played 25 minutes and continues to play relatively well, but the Frenchise will take his rightful place in due time.

Played 19 minutes. Whew, that was a close one. I really thought there for a sec that Maximillian was truly going to be a thing.

Oh, Dennis. I still believe in you, but as I mentioned way above….I be sliding into DMs.

Barnes is the most mediocre good player for both fantasy and reality. Plays a ton of minutes, hoists up shots, and puts up stats, yet thinking of Barnes doesn’t necessarily make me want to puke….more like a little regurgitation.

A very impressive performance for the rookie, as the Thunder are very good defenders on the wing. I’ve always been enamored with the athleticism of JJ, but his J always concerned me. JJ having no J makes no sense in the literary world. On the basketball court, a totally different story. There’s no keeping an eye on him. Gotta pick him up to see if the light has gone on because it’s impossible to see with that ‘fro.

Russell Westbrook messed around. Stocktonator doesn’t, as it had Russ the number one play last night.

Russ now has 92 career triple-dubs. Oscar Robertson has 181. Russ should overtake him by next year.

After playing 31 and 33 minutes the prior two games, TFerg only got 18 minutes of run. Me thinks that Melo was like, “Listen here, young pup. I’ve already been emasculated by Russ and PG. Ain’t no way you coming in here and pushing me down another rung. You best be getting into your place. You hear?”

Kawhi Leonard has a partial tear in his left shoulder. Just when owners were getting comforable, now they get to go back to Kawhi-ing again. At least they can hang their hat on the “no news is good news” thing for a bit.

I could see LMA having a little Tonya Harding in him. Kawhi was starting to get ramped up and taking away some of his usage.

With Kawhi down, Kyle Anderson got the start at small forward and played 36 minutes.

I just found out recently that Mr. Anderson is in fact The One, not Neo. Sorry Kawhi. Might as well retire now.

Ginobli is almost on the Larry Bird tier for me, in the sense of a player that I’ve always hated yet respected so much. He has/is so freaking good. Gotta say, Argentina has some crazy good athletes. For basketball, soccer, and volleyball.

Played 31 minutes. I have a feeling he has a huge second half, health permitting.

Damian Lillard was out again, so Shabazz Napier got the start.

You play him when Dame is out. EZ PZ.

I’m always a sucker for Harkless, especially in NBA 2K. He’s young, tall, agile, and can shoot. Unfortunately, in real life and fantasy, he will make you feel broke and Harkless.

Schroder is one of the few guys to care about on a 10-29 team. Man, the Hawks are bad. Like really bad. If an alien was to visit Earth and look upon the Hawks, the first thing it would ask would be, “is this team so bad that birds shit on the head of their best player?”