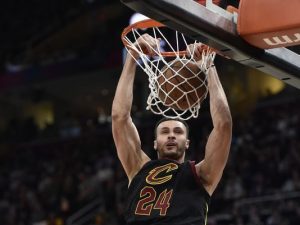 He played 32 minutes, but it could have been a bigger night. Unfortunately, the Cavs blew out the Pistons, 112-90. I’ve been wanting to see Nance play the small ball 5 for both the Lakers and the Cavs. He can shoot from the perimeter J, grab boards, and play D. His basketball IQ is high, he’s unselfish, and he plays his ass off. He is fleet of foot, able to switch multiple positions on D, and has the hops of a flea. A little undersized, but he makes up for it with all the things I just listed. As a Lakers fan, I was happy to see him ball out because he showed that ability in Los Angeles. As a Lakers fan, I was also sad because he is now in Cleveland. Now, Tristan Thompson did not play due to injury, but how can the Cavs not go with Nance going forward? UPDATE: Mr. Kardashian is out for 2 weeks. Anyways, there’s a perfect song from back in the day that filled me up with emotion and made me bob my head and made me wanna dance. Enjoy. Both the song and fantasy production that Nance will deliver.

Got the start at small forward and played 30 minutes. Brings some street cred to the Cavs. The D stats are nice, but not something you should count on. If he starts and gets the minutes, Hood is always a threat to go for 30 on any given night.

Had double-dubbed in six straight games. Too much Nance Romance.

Kyrie Irving sat, so Shane Larkin got the start and played 16 minutes.

The Celtics were up by 30 at one point, so I’m not sure the minutes distribution was an indication of normal operating procedure. In fact, only one starter played more than 22 minutes.

As each day passes by, my Kawhi comparisons get stronger and stronger. I guess this is the hill that I hopefully don’t die on.

Played 32 minutes off the bench. I was surprised that Larkin got the start over Rozier. It’s tough to glean any information from last night’s game due to the blowout. Regardless, when a member of the Celtics backcourt goes down, it looks like Rozier assumes the microwave role.

Got the start at center and played 27 minutes. I’m mad. I want to go punch someone in the face.

Uh…..C’est LaVine? I kid. Boston defends the wings very well. ‘Twas just one of those night. It happens.

Has been playing well lately. Contributes across the board. The only thing is the inconsistent minutes. One game, will get 30 minutes. The next game, 18.

Played 33 minutes. Has averaged close to 35 minutes a game the last five games, as the Grizzlies have been decimated by injuries. Green has now posted six straight double-dubs, with some 3&D stats. Straight cash homie.

Played 37 minutes, as he punked his older brother.

With Andrew Harrison and Mario Chalmers out due to injury, Kobi Simmons got the start and played 26 minutes.

Kobi has ability and now has the opportunity. As long as Harrison and Chalmers are out, he should get plenty of run.

Got Ka-Pau’d by little bro. I think Pau was just being a good big bro, knowing that it’s been a long, dreadful season for Marc down in Memphis.

Played 26 minutes. The most he’s played since early January. Wouldn’t expect this to be a normal occurence, but ask Eva Longoria that Tony is known for the unexpected.

Played 32 minutes and did well against one of, if not, the best defenders in Rudy Gobert. I am absolutely smitten with Vucevic’s game. Can score, shoot the 3, grab boards, dish out dimes, get his block and 211 on, and convert from the charity stripe. Too bad he missed a bunch of time due to injury. For the year, he’s a top 20 player for fantasy. He’s going to be an interesting one to rank in the offseason.

Played 18 minutes. Since returning from injury, Isaac has logged 18, 18, and 15 minutes. The offensive game is raw, ODB style, but the D stats. Oh, the D stats. I’m not a big Isaac guy, but it’s nice to see him getting some run. No value in redraft, but someone to monitor for dynasty.

Played 38 minutes. The usage has gone down since Ruby returned, but Jingles is still getting the minutes and contributing in the periphery categories. When he gets the shot attempts, ceiling games are within reach. I won’t be surprised if he starts posting some triple-dubs in the not so distant future.

Has been crushing it lately. I think it’s safe to say that Rudy is good and healthy now. Over the past couple weeks, Gobert is a top 10 player for fantasy.

Top 50 player for fantasy. Ben Simmons is just outside the top 50. Just saying.

Played 31 minutes. “Honey, why do you keep playing Dragan?,” asks Mrs. Triano. “Well, management wants us to lose, so I can think of no better way of guaranteeing that than playing him. Plus, it gives me an excuse to head to the bar for a nightly Bender.”

Two nights ago, it was Warren that went nuts. Last night, it was Devin’s turn. I think they play rock-paper-scissors on the plane for the “going nuts” rights.

Luke Babbitt got the start at small forward and played 26 minutes.

And the Heat still won by 22 points. I have no recollection of this, but apparently Babbitt was getting 25 minutes of run a game back in November. Ha! And I thought Spoelstra was just like, “So, you wanna tank? Cool. Babbitt! Get in there and jack up as many shots as your little heart desires.”

Played 25 minutes. The inconsistent playing time is a concern, but Hassan delivers when he’s on the court. Bam Adebayo only played 5 minutes, so that’s good for Hassan.

Played 20 minutes. Doesn’t get too much run, around the 21-23 mpg range, but can drain 3s, get some boards, and dish out some dimes. I’m not versed enough in the Kelly O rules to know exactly when to play him, though.

It was the Suns. Now, justice usually prevails in life. Unfortunately, either his parents spelled his name incorrectly or a mistake was made at the hospital, so no justice here. Only Justise, which equates to fantasy doo doo.

Yawn. Wake me up when he’s close to quadruple-dubbing.

Been a top 20 player for fantasy over the past month. Doesn’t get his block on, but contributes at a high level in every other category.

Jason Terry played 21 minutes. Seriously? What year is it? Or what universe am I living in where Jason Terry and Vince Carter are playing over 20 minutes a game.

I mentioned in yesterday’s recap that the Plumlees must have a powerful prayer group. Well, I assume that the Bogdanovics have a much more sizeable crew, as both Bojan and Bogdan have been balling the F out lately.

Randle has been so good since Luke has given him significant minutes. With that said, I fear that the Lakers are going to stab him in the back.

Got the start at small forward, as Brandon Ingram was out, and played 38 minutes. The shooting hasn’t been lights out, but at least the Kuz is contributing in the periphery categories. Love seeing that.

Played 26 minutes. Has been getting a consistent 23-25 minutes a game over the past month or so. If he’s going to get those minutes, you can expect plenty of 3s and and blocks.

Played 41 minutes. Been getting a ton of minutes lately. The crazy thing with KCP’s play, though, has been the boards. He’s been averaging over 7 a game for the past month.

Played 30 minutes off the bench. Talk about a microwave. 21 shot attempts! Luke essentially went with an eight man rotation last night. IT is getting minutes, shot attempts, and feasting on second units.

Played 29 minutes. I like Nurkic as a player. Very skilled big man. Unfortunately, I have no idea if he’s going to play 30 minutes or 15 minutes. Very frustating.

Sucks that it came against the Lakers, but I always appreciate watching Lillard play. With that said, y’all know what time it is.