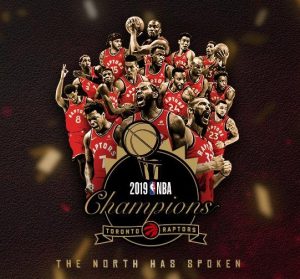 The defending NBA Champion Toronto Raptors (that has such a nice ring to it) return to defend their title with all the key pieces intact, except for the devastating loss of Danny Green. They’ll miss his defense, dead-eye shooting, and the occasional spectacular block. Outside of Green, there’s really no one else that the Raptors will miss as they ramp up for yet another successful year. Well, I suppose they miss JVal, Caboclo, and Wright, but those guys were dealt mid-season so they don’t really count for the the purpose of this exercise. Anyone else I forgot to mention?

Ok fine, I guess it’s about time I face reality and accept the fact that Kawhi is forever gone, taking his talents to La La Land. The Raps had a brilliant year and a historic playoffs run, but they will have to temper expectations this year. Kyle Lowry just turned 33 and one has to wonder how much gas he’s got left in the tank. Pascal Siakam is their young star, who leads a team full of hungry young guns and a few vets who can still contribute. Expect to Raps to be a playoff team, but I’m afraid the glory days are a thing of the past. Winter has come and gone, and so has the King of the North.

Kyle Lowry keeps on chugging, and one has to wonder how much longer he can keep up his style of play after just turning 33. Raptor fans are hoping they can get another year of decent play from him before his gargantuan contract finally expires next year. I have a feeling Lowry is going to give it everything he’s got this year and earn himself another pay day. The scoring dipped, but he did set career highs in assists and blocks. Early rankings have him sliding a bit into the 40s and 50s, so he should provide good value there.

The unsung hero of the championship run, Fred VanVleet also returns to play back up PG and SG minutes. He’s a legit spark off the bench and contributes in treys and assists. With Kawhi gone and Lowry getting a year older, this may open up the door for VanVleet to get a few more minutes and a bigger role. He could be a sneaky value late in the draft.

Norman Powell was all the hype a few years ago, when he was the one providing the spark off the bench. Raps fans had high hopes for him, which unfortunately did not pan out. With Kawhi gone, this may finally open minutes for consistent playing time and a defined role. OG Anunoby will also get a lot of run at the 2, so one of them is bound to be useful for fantasy. Masai Ujiri has a knack for finding hidden gems late, and Anunoby looks like he might yet be another one of those brilliant finds. In fact, last year at this time was when some writers were saying that OG was actually a better prospect than Siakam. Of course, no one can deny that Siakam is the new face of the franchise, but young guns like Powell and Anunoby give the Raptors faithful some hope at the wing. Both these guys are worth a late-round flier.

Growing up, it was always a dream of mine to play in the NBA. By the age of 16, it became abundantly clear that this was not in the cards for me (strictly due to my height and nothing else I assure you!), so it blows my mind to think that Pascal Siakam only started playing basketball at the age of 16. It took him only eight years to go from never having touched a basketball to being a star on the NBA Champions. This time eight years ago, I picked up my copy of Modern Warfare 3 and just recently completed the game on regular difficulty. That’s what I accomplished in the eight years that it took for Siakam to become a champion.

Siakam is the unchallenged SF/PF for the Raptors this year, and should take a step forward as the new anchor of the team. Anunoby, Stanley Johnson, and Rondae Hollis-Jefferson will all get some run at SF, but make no mistake, Siakam is the star of the show.  He is being ranked as a late second-rounder in most rankings, so there really isn’t a lot of value there fantasy wise. As big of a Raptors fan as I am, I probably won’t have him on many teams.

Serge Ibaka is only 29 years old. Why do I feel like he’s an ancient veteran on his last wheels? He did have a mini-resurgence last year with 15 points, 8.1 boards, and 1.4 blocks. The FTs and treys took a dip however. Serge should start the year as the team’s starting PF, with RHJ and Siakam playing some minutes at the 4 as well. I see him playing just under 30 minutes a game, and getting similar stats to last year.

Rondae Hollis-Jefferson is someone who’s always had a lot of promise, and at times played like he could actually be a key piece for a winning team. He was very good in 2017, but injuries caused him to lose minutes last season. He now gets a fresh start in Toronto and could carve out a role playing both the 3 and the 4. I’ve always been a fan of RHJ and he makes for a great flier pick in the last few rounds.

The Memphis Grizzlies did what most Raptors fans wanted, which was to play Jonas Valanciunas 30 minutes a game. Now that he’s gone, and flourishing with the Grizzlies, we’re left with Marc Gasol as the possible starting center. He just turned 34 this year, so it’s not like he’s in Pau Gasol territory or anything. He did manage to play 25 minutes a game last year for Toronto, which seems like a reasonable number this year. People are still ranking Gasol in the top 50, which I am not so high on. He’ll be a valuable contributor in real life, but his top 5o days in fantasy are likely over. Ibaka will also step in and play the 5 at times, but other than that it looks like the Raps will be pretty thin up front.