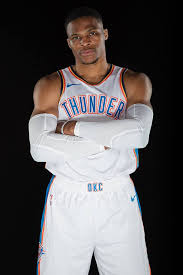 A brook is a small stream that invokes a sense of calm and serenity. I see a man painting the beautiful landscape on the canvas held up by an easle. The green grass on the banks reflect off the water while Bruce Lee whispers into my ear, “Be like water.” The birds chirp while the frogs croak. I just want to sit down, cross my legs, and meditate. Ohhhhmmmm. SLAM! BLAM! KAPOW! POP! BOOM! A Westbrook, on the other hand, is….well, imagine a herd of wildebeest crossing the Mara River…..with a bask of crocodiles that haven’t eaten in weeks. That’s Russell Westbrook on the basketball court….and last night he feasted.

Westbrook has now messed around in back-to-back games and last night marked the fifth time this month. Over the last four games, he’s averaging a trip-dub with 1 threeecola and 1 steal. With that said, he’s only been a top 80 player because of the lack of blocks, 68% shooting from the line, and 4 turnovers per game. Beep. Boop. Bop. I was wondering why the Stocktonator was watching so much Animal Planet yesterday, as it had Westbrook as it’s #1 player last night.

No longer a top 10 player for fantasy. He’s now top 5!!! While he doesn’t average a trip-dub like Westbrook, George does provide 8 boards with 4 dimes, while contributing 3.5 threeecolas, 2.3 steals, and 0.5 blocks. He also shoots 44% from the field, 83% from the line, and only turns the ball over 2.6 times per game. Rated M for mature.

Top 35 player over the past seven games, primarily due to the 68% shooting from the field and 71% from the line on 3 attempts. Who wins? The beast from Game of Thrones or Adams? My $$$ is on Adams.

Over the past four games, Ferguson has been a top 60 player. A 3-and-D player, you can see the confidence oozing from his body, as he’s attempting over 3 more shots per game than earlier in the season.

So, the Pelicans had a skeleton crew going last night, as Julius Randle (ankle), Nikola Mirotic (calf), and Anthony Davis (finger) did not play.

Got the start and played 38 minutes. Must’ve been so liberating for Miller, as he was hucking and chucking knowing that there would be no hook in sight.

Third straight start for Okafor and he received 25 minutes of run. As long as Anthony Davis is out, Okafor is going to start and provide points, boards, and blocks. He’s averaging 2 a game over the past 4 games! 33% from the line on 2.3 attempts, though. I still can’t believe Jahlil is a thing in 2019.

He’s going to have to be the guy with all the injuries. Let’s see what you got Jrue!

Elf had a usage rate in the 16-18 range. Last night, that number was 21.9. Good times in New Orleans. Even better times in LA perhaps? Yes, I’m a pathetic Lakers fan.

Played 23 minutes off the bench and was a vital part in bringing the Pelicans back in the game last night. Just keep in mind that he was the only other big man available last night. Coming into last night’s game, Diallo played a total of 13 minutes this month.

Top 50 player on the season. Is he the most unique player in NBA history? I could take that in some many ways, but fundamentally, Green could be the most underrated and overrated player at the same time.

I was skeptical that he could return from that Achilles injury so soon. Hahahahahahahahahhahahaha. I’m a fool.

Played a team-high 40 minutes with a 29.3 usage rate. With Wall out of commission, Beal is going to dominate the ball and continue having a sky-high usage rate. Looking ahead, SAC and WAS are the only two teams that play 12 games during the playoffs.

We know Otto contributes across the board, so no worries there. But much of his value always derived from his pristine efficiency. Well, he’s been shooting around 35% lately. No bueno. But, but, but…..the volume has increased, as he’s averaging 14 shots per game now. He’ll start shooting better, and when he does, Otto is going to be accessing some ceiling games.

Nurkic has been such a beast this season, as he’s a top 25 player. With that said, he’s always had bouts of inconsistency, so of course he struggled against one of the best matchups he’s had in a while. Damn, I sound like a whiny little biatch. I’ll brush it off as a shit happens moment.

Played 33 minutes off the bench. Over the past eight games, Layman has been a top 100 player. He’s providing points, threeecolas, and rebounds while shooting 58% from the field and garnering a usage rate of 19.3. Jake from State Farm he is not.

Played 30 minutes off the bench. Blow out run against the Suns. Nothing to see here. Go check out his bro, though. I heard he’s pretty good.

Continues to start and played 28 minutes. The Taj Mahal will be open forever it seems.

He’s a top 200 player, yet he continues to lead the team in shot attempts most games. I have a frown that doesn’t want to turn upside down, and I’m not even a Timberwolves fan.

Derrick Rose only played 12 minutes because he injured his ankle. He’s had issues with both his ankles and heel lately, so something to monitor.

Played 30 minutes off the bench. With Jeff Teague, Derrick Rose, and Tyus Jones out of commission, Bayless is going to get plenty of run.

The boards and dimes are nice, but Kuzma has a relatively low floor when he shoots poorly because he doesn’t contribute much in the D cats. He’s been a top 150 player over the past few weeks and is top 100 on the season.

Top 300 player for fantasy. Ha! Poor free throw shooting and, while he contributes across the board, those contributions are a little too small.

Got the start and played 21 minutes. Tyson Chandler DNP-CD and JaVale McGee played 22 minutes. It’s a fluid situation and Luke Walton could employ the three-headed monster at any moment, but Zubac has been playing well and may have carved out a significant role for himself.

Got the start and played 37 minutes in his first game back from injury. He’s a must pickup, as Lonzo Ball is out for at least 4-6 weeks.

saw Marc Gasol in the sell column the other day… would you trade him for Ayton straight up?

are there any good articles summarizing h2h playoff schedules? i’ll have a bye locked up so I want to target guys with good 2nd and 3rd week schedules in the playoffs

@waffles: I’d rather have Gasol but I wouldn’t mind the trade.

I was thinking of putting something simple up in regards to playoff schedules: show number of games with pace and defensive efficiency rankings. Will try to get it done this weekend

ESPN leagues appear to have their championship week beginning April 1. When you are referencing playoff schedules, are you using Yahoo! Or your internal league or ? Many thanks.

You dropping Dario for any of – Wes Mathews, J-Val, Trier, Bamba, FerguSON

I’m good with that. Iso Zo for me

I’m holding Zo for now.. Who do you like out of the mentioned FA’s ?

I’m in a pickle right now! Need that mic dropping advice you always dish out!

Currently I’m sitting in 3rd in my 9 cat 10 player league, but I was recently in 1st but due to Capela’s injury my team has taken a hit.

I got offered Damian Lillard for Khris middelton & harrison barnes

Let me know what you think of this trade!

@Don Majikowski: Damn, Curry and Harden with Embiid. Sick. I’m ok trading for G, but you can probably get more for Harden. Or at least you should. He plays 11 games during the playoffs and even if CP3 takes usage, he’s still going to have an insane rate. It just won’t be NBA2k on rookie mode level.

@Don Majikowski: Ha! That is good.

Well done on the Harden trade

Hey Son,
Would you trade away KD + Middleton for Jokic? Jokic would be a 7th rd pick next year and Middleton would be an 8th.

I’m dead last in a 12 team H2H and looking towards next year. My other keeper is Boogie who will be a 6th rder.

Need blocks and FG % for today’s Games. Who do you like best?

Hey all! Would you drop DRose for Rondo?

Would you drop anyone of my team for FA ?? h2h, 9cat, 12 teams, no IR spot. I’m looking best player for rest of the season

Hi, man I am planing on dropping JJJ. I am little bit of fed up with him. I am currently in 3 games losing streak and I know JJJ is a top 60 player but he only provides me like 12 point 1block and few rebs. You good with this move?

@Max: Who are you dropping him for?

Good suggestion on Plumlee. Just did not block shots so have to keepOkafor for at least one more game.

Best on the wire in 12 teamer, h2h, 9 cat league (solidly in second place so will get a bye). Who should I pickup for Okafor’s spot? Leaning White but rank top two in case he gets picked up with a higher waive order. Any other swaps? Fournier on a short leash.

@JC: Yeah, sux. Faried and Bamba were the plays for you.

As for the wire, White and Vonleh for me

Plumlee played well so no regrets. Reasonable recommendation for sure based on minutes last night.

I am intrigued by Bamba. He too just hit the wire. Has a great playoff run (ESPN). Just need Vucevic to get moved. Have a great weekend

@JC: Yeah, keep an eye on Bamba for sure. He’s just so limited offensively. Have a good weekend as well

I was streaming Okafor’s spot but he is actually playing well. Any chance he plays alongside AD or is he toast upon his return? I have Mirotic too btw

@JC: Would need one or both of Randle and Mirotic to be hurt. AD does prefer playing the 5 so it’s possible

Do you think either Zubac or Mitchell Robinson is worth starting tomorrow for blocks and FG%? Concerned with limited PT given that my league has a games played cap. Thanks.

@Mark: and on a related note, which of them do you prefer ROS?

@Mark: Robinson for both

@Son: thanks Son, even with Zubac playing Phoenix tonight?

@Mark: Yeah, but if you feeling Zupac I don’t have a problem with that. Go with your gut!

Would you trade my Butler for his LeBron?
He has 3 injured so he may want/need to trade.

Hey, who will have a better ROS? Ingles or JJJ in your opinion, and why?

JJJ. He has a higher usage rate, which could spike if Gasol gets traded. He’s missed a ton of time on the court due to foul issues. That’s something I can see improving. He’s a dub-dub threat, who can contribute some threeecolas, but will also contribute the D and shoot a high percentage from both the field and line.