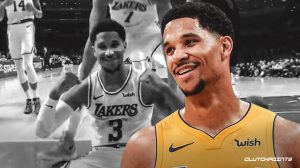 Back in 2008, iHeartRadio and SiriusXM changed the landscape of radio. Listeners could customize their listening experience, had access to out-of-market stations, and were given a cornucopia of options (podcasts, news, sports, and channels for specific genres). Options equal versatility which enhances a product. That concept isn’t just for the radio world, though, as it has become the defining characteristic of the modern day, positionless basketball that has taken root. Last night, Josh Hart was a perfect example:

Hart played a team-high 44 minutes. At 6′ 5″ and 215 pounds, Hart can play the 1, 2, or 3. He’s strong enough to handle himself down on the block, but possesses the agility to guard on the perimeter. He does get burned from time to time, but more often than not plays sound fundamental defense. Hart can shoot from beyond the arc or finish strong at the rim. He’s a willing passer and is able to rack up steals. Now, since LeBron James went down with an injury, Hart has been given an opportunity and has not disappointed. He’s been a top 50 player and has averaged 34.6 minutes, 12.4 points, 1.8 threeecolas, 6.8 boards, 2.1 dimes, 2.1 steals, and 0.6 blocks. The only bugaboo has been the 38% shooting from the field. When LeBron does return, Hart will likely shift back to the bench and lose 7-9 minutes of run per game. With that said, because of his versatility, he will still contribute across the board and provide top 125-ish numbers.

Over the past seven games, Aldridge has been the #11 player. LMA with the O!!!

Got the start with Rudy Gay out (sprained wrist) and played 27 minutes. Who was the idiot that expected a breakout for Poeltl? What a moron. Over the past eight games, Poeltl is 4-for-16 from the charity stripe. I still don’t get how professional ballers can’t make free throws. Go to the pier or Disneyland and practice on those carnival games. With how much those games cost and how rigged the rims are, improvement is bound to happen. Not so humble brag, I took the kids to Legoland last week and drained not one…but two shots for the big teddys!!! Holla!

Who’s the idiot that faded DeRozan this offseason? Geez, what a loser. DeRozan is averaging 6.2 rebounds and 6.4 assists per game, both career-highs. Pop for President.

Dre leads the league in rebounds at 15 per game. He also provides 1.6 steals and 1.8 blocks. So juicy, but no threeecolas, dimes, and the free throw shooting sucks. Please refer to the Poeltl blurb.

Averaging 6 threeecola attempts per game, which is tied for 23rd in the league. Bullock also has three games with over 10 attempts.

Played 22 minutes because of foul trouble. Shocker. JJJ leads the league in personal fouls with 3.8 per game.

Only the sixth time this season that Conley has dished out at least 10 dimes in a game. After the debacle against DET when he bageled, Conley has scored 31, 21, and 22 points.

Played 25 minutes off the bench. Green won’t play more than 25 minutes, but he does provide points and rebounds. If you’re into those sort of things.

We are all witnesses.

Played 24 minutes off the bench. What did I just witness? Oh, Pelicans walloped the Grizzles, 114-95.

Played 39 minutes. Oui oui! Top 25 player. We know about the blocks and boards, but did you know the field goal percentage (65%) is higher than the free throw percentage (63%)? Also, he’s dishing out 2 dimes a game, a career-high. He has never averaged more than 1.5 in any season.

Played a team-high 40 minutes. The poor shooting efficiency with slight downticks in threeecolas, boards, and dimes have produced a top 100 season for Mitchell, instead of the top 55 one he finished as last season.

Played 29 minutes off the bench. Points, threeecolas, and rebounds are what Crowder provides, but like Mitchell, the efficiency stinks. What’s up with the water in Utah?

Only played five minutes due to a hamstring injury. MRI on Tuesday.

Played 29 minutes. Neto soaked up the backup point guard minutes and Dante Exum is expected to be out for a couple of weeks (sprained ankle). So could Rubio. Do with that information what you will.

G has attempted 4 and 5 threeecolas in each of the last two games. That doesn’t sound like much, but he was usually around 1-2 attempts per game. If he gets that part of his game going…..Would the universe fold into itself? Imagine if he learns the Harden step back? O. M…….G!!!!

The only way to neuter the Steiffel Tower is to attack with long-range artillery. Lopez is averaging 2.6 threeecolas per game. Since he started launching from beyond the arc two years ago, he’s averaged 1.5 and 1.8 per game.

Top 40 player over the past seven games. Budenholzer for VP! Hey, we already got Pop for President.

The last four games, Jokic has averaged 27 points, 2 threeecolas, 13 boards, 7.8 dimes, 1.8 steals, and 1.5 blocks! The usage rate has been 35! The turnovers have been elevated at 5 per game though. A great characteristic if he was a pastry chef. Anyways, so ridiculous. It’s a Jokic.

Got the start and played 27 minutes.

Got the start and played 22 minutes.

It’s only a matter of time before both start balling again.

Played 24 minutes. Even with the return of Harris, Morris should continue having a substantial role. He’s earned it.

It looks like Juan Hernangomez (2o minutes) and Miles Plumlee (15 minutes) will be most affected by the return of Millsap and Harris. Something to monitor as more games are played.

First time scoring 20 points and second game attempting more than 10 threeecolas. Tucker plays a shit ton of minutes and does provide the D. The Nuggets doubled and trapped James Harden, forcing him to pass and making the others beat them. The plan failed, as the Rockets won 125-113, but it’s a strategy that more teams could employ.

We are not worthy.

Not James Worthy, but Big Game James works for both.

Played 28 minutes. The playing time had been decreasing, but Joe Harris and DeMarre Carroll were both out last night.

Got the start and played 33 minutes. ‘Twas a spot start due to all the injuries. With that said, Napier ain’t shy when he’s on the court and scored 32 points just five games ago.

The Manimal’s alive!!! I forgot he was still in the league tbh.

The Celtics defeated the Nets 116-95. Eight players scored in double figures, but no player reached 20 points. Kyrie Irving led the team with 17. No player received 30 minutes of run, but eight players got at least 20 minutes.

Top 25 player over the past five games. Pascal Siakam is the likely front runner for Most Improved Player, but Vonleh should be right there in the mix.

Played 35 minutes. Fizdale’s boy doesn’t excel in any category, but does contribute a little something something in each. The main issue is the shooting efficiency, as he often plummets into the 30% range. Maybe he’s a little too Muiday?

Played 29 minutes off the bench, while Luke Kornet got the start and only played 19 minutes. When he plays, Kanter dub-dubs. You just never know when Fizdale decides to only give him 14 minutes of run.

Played 31 minutes off the bench. The last time Super Mario received 20 minutes of run in a game was back on December 8, 2018.

Damian Lillard and C. J. McCollum both scored 17 points. Jusuf Nurkic led the Blazers with 20 points. All five members of the bench played exactly 22 minutes. Did someone forget to turn off auto subs?

Only played 25 minutes, as the Magic got spanked, 95-111 in Sacramento. Anyone still not buying Vuc as a top 10 player?

It’s an experience at Ross. You usually get what you pay for, but get pleasantly surprised from time to time.

Played 20 minutes off the bench, while Nemanja Bjelica got the start and played 22 minutes. The Nemanja was good while it lasted, but now it’s time to puff, puff, pass. With that said, he will still get some run, which will cap any kind of ceiling for Bagley.

Got the start because Iman Shumpert was out (finger) and played 32 minutes. I’m a big BogBog guy and think he has top 50 upside if he gets the run. More than likely, he’ll be a top 100 guy, but there’s ceiling that can be accessed.

A nice bounce back game after his debacle against the Timberwolves. Ball can do it all. He’s just inconsistent from a mental, physical, and emotion level. He’s still only 21 years old.

Copy and paste from the Ball blurb. He was so aggressive last night taking the ball to the rack. With his length, developing strength, and agility, Ingram is tough to defend when he gets into the paint. With that said, he needs to work on the J and the free throw shooting. The pendulum has swung so far in each direction: Ingram is so good that he can be traded for Anthony Davis to Ingram is a bust. He’s still only 21 years old.

Luka is 19 years old. Everything I just said about Ball and Ingram…..

Still shooting over 70% from the line for the season and the blocks have returned lately. Top 60-70 player for fantasy.