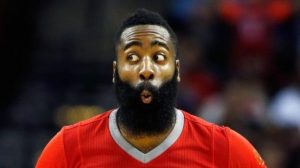 I was a sucker for all the James Bond movies growing up. There was always action, women, lots of cool toys, and more action. What most confused me early on, but later fascinated me, was the overtness of the Bond character. At his core, he was a spy after all, and a spy is defined as “a person who secretly…” I don’t need to continue the definition. Could a ninja ever be famous? Wouldn’t that go against the fundamental premise of being a ninja? With all that said, Bond took the spy game to the next level. Everyone knew he was a spy, and he knew that everyone knew, yet he did his spy thing while everyone else played along. Translation: Bond was a freaking boss. Which is exactly what Harden, James Harden is.

That’s seven straight games scoring 30+ points, with two games over 40 and one 50-burger in there. The overtness that Harden exhibits is just as bold as Bond. Defenders know his moves, yet still get played. Now, with Chris Paul out for an extended period of time, the usage rate spikes to the mid-40s. The comparable analogy would be Bond walking into a casino with both hands flashing the bird, acquiring the information that he came for, and of course bringing the D for the girl.

I was looking forward to G playing Smash Bros. with the balls of Super Mario, but Coach Fizdale was wise in giving Mario Hezonja 0 minutes on Christmas day. I’m sure the powers on Fifth Avenue were happy to keep the programming G-rated. Wow. The Universe truly is amazing, as that just connected organically. Anyways, the only weaknesses in G’s game are the lack of threeecolas, poor free throw shooting, and elevated turnover rate. He’s a top 10 player on the season, and will probably remain in that range for the rest of the season. Looking forward, though, once he makes the necessary improvements, he could start moon walking over Anthony Davis.

Middleton has been turrable over the past couple of weeks. The main culprit has been the frigid shooting (34% from the field), which has contributed to him being a top 140 player. With that said, the usage rate is still at 25 and production in the peripheral categories remains the same. He’s going to start heating up again and be the top 30 player that we all know and love (except for the hater Craig!). A prime buy-low candidate.

Top 60 player based on the contributions from downtown and blocks. It helped that Enes Kanter was “defending” him yesterday, but regardless, he’s going to get plenty of open looks in the Budenholzer offense led by G.

Malcolm in the Middle is an apt nickname, as he’s not a fantasy superstar, yet not a fantasy scrub either. He’s….wait for it….right in the middle. If he was one of the three bears, he wouldn’t be too hot or too cold, but…..just right. Top 75 player who contributes in all but blocks.

Played 28 minutes and was the only member off the bench to receive over 20 minutes of run. George is not quite over the Hill yet, but don’t be a hero and plant a flag to die on this Hill.

On the Son of the Lord’s birthday. How many times do I have to tell y’all? God trusted Noah. So can you. I kid. Vonleh mainly provides boards and blocks.

Led the team in shot attempts, which is mighty impressive when you realize that he plays with Tim Hardaway Jr. This Knox looks to be pure gold. From a fantasy perspective, though? At least for now, he looks to be a points, threeecolas, and boards guy. The D? Non-existent, which makes my prior references of Fort Knox stupid and ill-conceived.

With Knox and Mudiay emerging, the shot attempts have ticked down by over 2 per game. Still, he’s jacking up around 15 shots per game. Shooters shoot. The field goal percentage sucks and he won’t contribute any blocks, but THJ will contribute a little something something in the rest of the categories.

Returned from a seven-game absence (hamstring injury) and played 18 minutes. Trier has shown that he can contribute across the board and be a professional getter of buckets, but we just never know about Coach Fizdale’s rotations. Keep an eye on the minutes and production from Trier going forward.

Mario Hezonja DNP-Coach’s decision. I’ve been informed that we have footage of Hezonja….

Back-to-back games grabbing 23 rebounds, which are a season-high. C & C Music Factory makes the people dance with points, rebounds, and blocks. Unfortunately, the record skips once in a while due to the poor free throw shooting.

Got the start and played 39 minutes. With Paul out, this should be the status quo for the foreseeable future.

Played 31 minutes. Damn, desperate times called for desperate measures. I think Rivers sucks, but minutes are minutes and it looks like he may get a ton of them. In addition, I’m sure that he will be encouraged to huck ’em and chuck ’em.

Aaaaaaaalmost messed around. Boo hoo. A top 35 player for fantasy, primarily due to the elevated turnover rate and 61% free throw shooting. Anyways, he could improve as the season goes on, as he is recovering from offseason surgery, but I’d be concerned from a dynasty perspective.

Has been nothing but a menace to fantasy rosters. Shall we play a game? Over the past seven games, where has he ranked in fantasy? Nope, lower. Lower. I’m pretty sure lower. Give up? How close were you to the #308 player? Thanks for playing.

On the 12th day of Christmas, my true love said to me. 12 made free throws from Joel Embiid. Thank you. There’s a hat by the door to place your donations.

According to ESPN Stats & Info, that was the longest shot of Simmons’ career. Could someone check on Hell for me? Has it frozen over?

This Butler is definitely worth the money. He even works on Christmas! With Simmons and Embiid sucking up usage, the shot attempts are down for Butler, which means he’s more a top 30-ish player. With that said, he contributes mid-teens in points, over one threeecola, around four assists and rebounds, and a whopping two steals per game.

Morris is having a career-year in many respects. He has never averaged more than 2 threeecolas per game. This year he’s draining 2.2. This is the first year he’s shooting over 40% from downtown (42%) and first time shooting over 50% from the field (55%). My first inclination is to spit out regression, which is more than likely to be the outcome, but I’m not going to dismiss the notion that maybe both Morris and Coach Stevens have learned to put him in the most ideal situations, which has increased his efficiency.

Quietly putting up a top 50 season. The only category is lacking in is assists. Stop being a ball hog!!!

Second game back from injury and played 30 minutes. It will take time for him to get back into the groove, but should return to top 40 form soon.

The world is flat. Are you a top 10 player in fantasy basketball? No? Then stfu.

Played 22 minutes and was the only big off the bench, even in an OT game. Only break glass if you need boards, steals, and threeecolas from a big man.

Only played 21 minutes because he….

Strained left groin is the diagnosis and he’s considered day-to-day. I don’t know about you but the “I felt it pop” doesn’t reassure me of the day-to-day thing.

Played 24 minutes because….the Lakers smoked the Warriors 127-101 in Oakland. Now, with the LeBron James injury, it must be written that in 131 minutes without LeBron on the court, Ingram has a usage rate of 31.9, an increase of 7.9%.

Over the last three games, Zubac or Zupac (as Mike Gallaher of Rotoworld calls him) has  played 31, 33, and 32 minutes. He’s shot 9-for-10, 8-for-12, and 8-for-1o, and averaged 17.6 points, 8.6 rebounds, and 2.6 blocks!!! Two of those games have been against Marc Gasol and Anthony Davis. He’s been a top 10 player!!! As @WorldWideWob wrote last night, maybe it’s a ploy by the rest of the league to make Zubac look like the second coming so that the Lakers do not pursue Anthony Davis. Hmmmm. 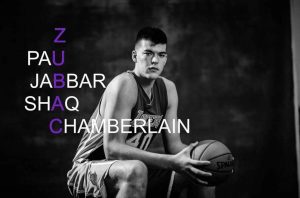 Played 23 minutes off the bench. There’s a “Primetime Rondo” narrative out there saying that Rondo plays well in nationally televised games. I haven’t looked at the numbers but it does seem to be the case. Regardless, Rondo has some value, but he won’t play like this every game. The important thing here is that he ciphons minutes from Lonzo Ball, who played 24 minutes last night.

Josh Hart and Kentavious Caldwell-Pope played 29 and 26 minutes respectively. KCP scored 9 points, while Hart scored 12. They both contributed some peripheral stats, but not many. They are both low usage players but are getting minutes, and minutes are half the battle. Yo Joe!

Dude has no confidence in his shot. As a result, teams are just helping off of him and hoping he shoots. Until he gets that confidence back, it’s going to be detrimental for both the Warriors as a team and Green’s fantasy outlook.

Durant was good, but maybe he should change his name to Tony so he can be grrrreeeaattt. Like I said, the tip hat is located at the door on the way out. KD is one of the most consistent fantasy performers out there. He is the water-is-wet of the NBA.

We talking ’bout a game!

Low usage player who does play a ton of minutes and contributes boards, threeecolas, and steals….if you’re into that sort of thing.

Led the team in scoring, which isn’t saying much, as the Trail Blazers struggled in Utah and only managed to score 96 points. Y’all know I’m itching to post some Dame Dolla, but only in wins or when he goes bonkers.

7th in blocks with 2 per game. I would’ve figured that he’d be higher on the list to be honest. Maybe something was lost in translation? Naw, numbers don’t lie. But we humans often manipulate the numbers. We are a terrible species.

Metronomes swing from side to side in a steady rhythm. The Rubionome swings from side to side as well….but without the rhythm. Or the reason. And sometimes it stays at one end longer than it should. But eventually it always swings to the other side. Enjoy.

The past three games, Korver has been a top 70 player! Ha! A handful of threeecolas, boards, dimes, and a steal here and there will do that. He’s shooting over 50% from the field, so that number will likely come down a bit, and he’s only averaging 21.7 minutes per game. With that said, if you need threeecolas, you could do worse. Plus, he can get hot and contribute in the peripheral categories to access some ceiling. Is this where I insert the shrug emoji?