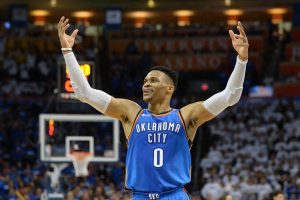 If I lived in the country, I’d like to be within walking distance of a brook. Hearing and watching water flow is so relaxing to me. Plus, it could help irrigate my farmland and hopefully fish would swim rampant in it. I like watching fish. I’m a terrible fisherman, though, which bodes well for the fish. Funny story. My buddy took me fishing off the pier once and I caught this fish that was maybe six inches long. Kid next to me, maybe eight years old, looks at my fish, then looks me dead in the eye and says, “That ain’t no fish!” F U kid. Anyways, I mention a brook because I know what to expect from it. It’s going to bring water, fish, and it damn well ain’t going anywhere. Unless the neighbor upstream builds a dam. Damn! Russell Westbrook brings that same consistency.

11 straight trip-dubs! He now has 128 for his career, 10 behind Magic Johnson and 53 behind Oscar Robertson. He should knock that out in two seasons tops. From a fantasy perspective, the high turnovers and low shooting efficiency keep him down (top 35 over the past seven games), but the counting stats. Oh, those counting stats. He’s AVERAGING a trip-dub. They flow like water down the Westbrook.

Old Zeller got the start and played 30 minutes. Since returning from injury, he’s played 23, 25, 26, 35, and 30 minutes, while starting the last three games. Not a sexy fantasy player, there’s no need to put down Old Zeller, as he is reliable and will provide points, boards, blocks, with a sprinkle of dimes.

Got the watered down version of the Kemba Label. As a result, the Magic made the Hornets disappear, 127-89.

Jeremy Lamb got the start but only played 18 minutes, while Malik Monk played 25 minutes. Lamb scored 14 points while Monk produced 15 points. It was a baaaaaaaaaaaaaaaaaaaaaaaaaad night for the Hornets, so Monk received the blowout run.

It’s going to happen one day, right? Bueller? Barely a top 100 player on the season.

Who would’ve thunk it? Vucevic’s fantasy day was neutered because the Magic were too good! A magical world indeed.

Bounced back from his 1-for-7 shooting performance the prior game. Ross is good. Just remember that it’s of the discount variety.

Played 26 minutes off the bench. Roscoe Briscoe has averaged 25.4 minutes over the past four games. A super-low usage player, he will provide some tres, dimes, and rebounds well for a guard.

Got the start and played 31 minutes because…..shrug emoji. Fine, it was because Super Mario Hezonja was out, but still. What did Noah Vonleh do to Coach Fizdale?

Played 19 minutes. Robinson is capped by the presence of Jordan, but he’s still super productive in the limited run he receives. Top 30 player over the past seven games despite averaging only 21.5 minutes per game. He’s fifth in the league with 2.07 blocks per game and 11th in total blocks despite playing 41 games.

Is averaging 9.1 dimes in the month of February (eight games).

Led the Hawks in scoring. Never a good thing. It’s a shame Dedmon only averages around 25 minutes per game because he’s very productive. Top 60 player on the season and top 80 over the past eight games.

Played 27 minutes, the first time eclipsing the 20 minute mark in the nine games since returning from injury. Can’t trust him until he starts getting over 24 minutes of run on the regular.

He’s human after all. What a relief.

Played 22 minutes. Deuces were wild! With Jerami Grant out and Patrick Patterson sucking, Noel started the second half alongside Steven Adams. Wow! That combo probably won’t be one we see often, but let’s enjoy it for one night at least.

Only played 16 minutes because….he injured his shoulder. Shocker. It doesn’t sound serious but if this doesn’t give the Pelicans a reason to shut him down for a bit, then I don’t know what to say.

It’s been so weird how the Pelicans have been utilizing Randle lately. Over the past five games, he’s played 31, 24, 31, 22, and 39 minutes. So, I won’t be surprised if he plays 20 minutes the next game. I lied. I would be surprised if he does due to the AD injury. Actually, now that I think about it some more, it’s the Pelicans, so I wouldn’t be surprised. The mental gymnastics I play with myself is world class.

Over the past four games, Jrue has been a top 15 player with a usage rate over 30. He literally does it all and is 0.1 blocks shy of becoming a new member of the 1/1/1 club.